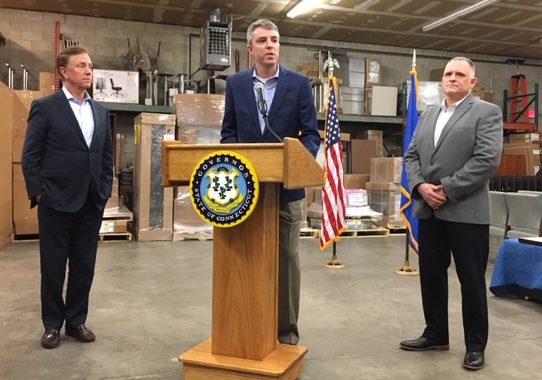 Wallingford — Gov. Ned Lamont seems to be giving up on the state of Connecticut being able to thwart Iran from becoming a nuclear power. He also is going soft on fax machines, snail mail, paying by check and paperwork in general.

Very specific references to Iran, fax machines and U.S. mail have found their way into state laws directing how the state of Connecticut must do business with suppliers, and Lamont said Tuesday the time has come to streamline and modernize those laws.

Selling stuff to Connecticut can require filling out a half-dozen forms, most of which must be notarized. In the digital age, there still are statutory requirements of communicating by fax and certified mail and paying by check, not credit card or electronic transfers.

Lamont and his commissioner of administrative services, Josh Geballe, outlined the proposed changes at Insalco, a distributor of office and institutional furnishings ranging from music stands and student desks to swivel chairs, conference tables and cubicles. It employs 12 people.

“We have literally dozens of areas in our laws that specify very antiquated interactions with the state,” Geballe said. Small businesses must print out and mail 90,000 documents annually, all of which must be reviewed and filed by state agencies.

“It’s time we revise those laws and bring them into the 21st Century,” Lamont said.

“It’s actually a better standard than ours,” Geballe said.

State law currently requires agencies to purchase 25% of its goods and services from small businesses. State law defines a small business broadly — anyone with sales of less than $20 million. In some industries, $20 million is a high bar; in others, it is miniscule, Geballe said.

“The SBA standard is very nuanced by industry,” he said.

Then there is Iran.

As of Oct. 1, 2013, state law has required that contracts worth at least $500,000 be accompanied by an “Iran Certification,” a statement that a company is not foreign owned. If it is, a sworn affidavit about whether it does business with Iran also is required.

The law was passed unanimously by the General Assembly, despite testimony from the state Department of Administrative Services and treasurer’s office that it most likely would not affect any company that does business with Iran.

The bill was sought to pressure Iran not to pursue nuclear weapons.

Geballe, a former IBM executive and tech entrepreneur, said that each element of the purchasing legislation sought by Lamont is “modest in isolation,” but together can save money and make dealing with the state more business friendly.

The purchasing legislation is part of an overall effort by the Lamont administration to modernize state government and reduce paper shuffling as the state anticipates a wave of retirements in the next three years that is expected to further shrink an already shrinking state workforce.

It is also reflects a desire by the administration to show it can work on more than one thing at a time. The governor’s office has been consumed by a yearlong campaign for legislative approval of a transportation financing plan that would authorize some form of highway tolls, most recently just for tractor trailers at a dozen bridges.

Last week, legislative leaders said they were aiming for a vote on Thursday. As of Tuesday night, the leaders had yet to schedule a vote.

“I still think it’s Thursday, but you better ask them,” Lamont said. “I talked to everybody a few days ago just to make sure we’re still on track.”