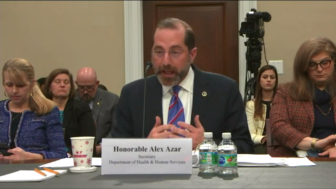 This story was updated at 7:30 p.m. with information from President Trump’s evening press conference.

Washington – Rep. Rosa DeLauro took to task Wednesday the Trump administration’s point man on coronavirus response, slamming his plans to divert money from a federal heating assistance and other programs to pay for efforts to combat the virus.

She also said her appropriations subcommittee, which helps craft the budget for the Department of Health and Human Services, will develop  its own response to the coronavirus budget.

“What has been submitted…is unacceptable,” DeLauro, D-3rd District, told HHS Secretary Alex Azar during an appropriations committee hearing on Wednesday.

Later in the day, President Donald Trump said he’s open to letting congressional appropriators like DeLauro develop their own emergency spending bill. The president also placed Vice President Mike Pence in charge of coronavirus response, a job that has been Azar’s.

As the sole witness at DeLauro’s hearing earlier in the day, Azar defended the Trump administration’s decision to allocate $2.5 billion to coronavirus response. About half of that money would come from new funding approved by Congress and the other half would be transferred from other programs.

Besides taking $37 million from the Low Income Home Energy Assistance Program, which helps many Connecticut residents, the Trump administration proposed shifting money earmarked for programs for the aged, the National Cancer Institute, substance abuse treatment, and other HHS programs.

“The $2.5 billion request has my complete and total support,” he said. “It is at levels that I think are appropriate.” 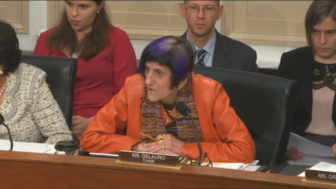 But DeLauro said the two-page summary of the plan that the White House submitted to Congress appeared to be put together without much thought, and she contrasted it with a 28-page submission from the Obama administration on Ebola.

“I appreciate your frustration with the two-page letter being the documentation,” Azar said.

Although Democrats have been most vocal about the Trump administration’s coronavirus response, Republicans have also panned it, especially plans to shift more than $500 million from the Ebola program to COVID-19.

Although Democrats have been most vocal about the Trump administration’s coronavirus response, Republicans have also panned it, especially plans to shift more than $500 million from the Ebola program to COVID-19.

That plan includes $4.5 billion for the Department of Health and Human Services to try to contain an outbreak in the United States, $1 billion to develop and manufacture a vaccine, $1 billion to help other countries battle the coronavirus, and $2 billion to reimburse states for costs incurred in tackling the outbreak that the Centers for Disease Control and Prevention says is expected.

In his afternoon press conference, Trump said he thought the $2.5 billion he proposed to fight coronavirus “is a lot.”

“Democrats…want much more than that,” Trump said. “We’ll take it.”

The president also said, “with regard to the money, they can do whatever they want.”

Trump continue to minimize fears of a U.S. spread of COVID-19, even as a new cases of the disease were confirmed Wednesday, bringing the number in the United States to 60.

“Because of all we’ve done, the risk to the to the American people is very low,” Trump said.

Meanwhile Anne Schuchat, the principle deputy director of the CDC, said “we are expecting more cases and this is the time to prepare.”