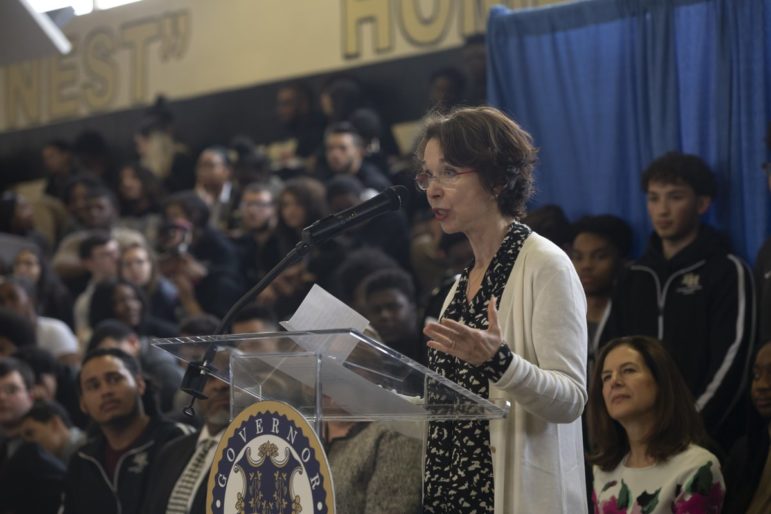 Barbara Dalio speaking at the April event when she and and her husband, Ray, announced plans to donate $100 million over five years to help students in Connecticut’s struggling schools.

But for the second time in two years, Lamont wants an exception for one of his top initiatives — Connecticut’s $20 million contribution to its education partnership with hedge fund giant Ray Dalio’s philanthropic arm.

And while the administration says the accounting maneuver it would use to avoid the cap is justified by the importance of the partnership, legislators from both parties say the Democratic governor is applying a double standard.

“This is a circumvention of their purported, ‘New Day’ in state budgeting,” said Sen. John Fonfara, D-Hartford, co-chair of the tax-writing, Finance, Revenue and Bonding Committee. “They’re essentially doing an end run around so this [$20 million] doesn’t show up on the books, so it doesn’t count against the cap. But they still say our priorities are subject to all of these rules.”

Lamont has been outspoken about his commitment to strict accounting practices since he took office.

“I want to be clear – no more funny math or budgetary gamesmanship,” Lamont said as he delivered his first State of the State Address 14 months ago. “I come from the world of small business where the numbers have to add up at the end of the month or the lights go out.”

“This is a circumvention of their purported, ‘New Day’ in state budgeting.”

“The budget Governor Lamont will present to the General Assembly next Wednesday is fully compliant with all of the existing caps and does not engage in the game-playing and gimmickry that have haunted our state for decades,” McClure said.

But the $23 billion budget Lamont offered last month would have exceeded the spending cap — had the administration not proposed using an accounting technique known as an “intercept” or “revenue transfer” to effectively keep a $20 million payment to the Partnership for Connecticut outside of the budget.

When asked whether this contradicts the governor’s anti-gimmick message, McClure said the approach shows Connecticut’s commitment to this important initiative.

“We are able to demonstrate to the Partnership and other outside investors that we have set aside funds to be used when the timing is appropriate and the Partnership is ready to make investments in our state’s public schools,” he said. 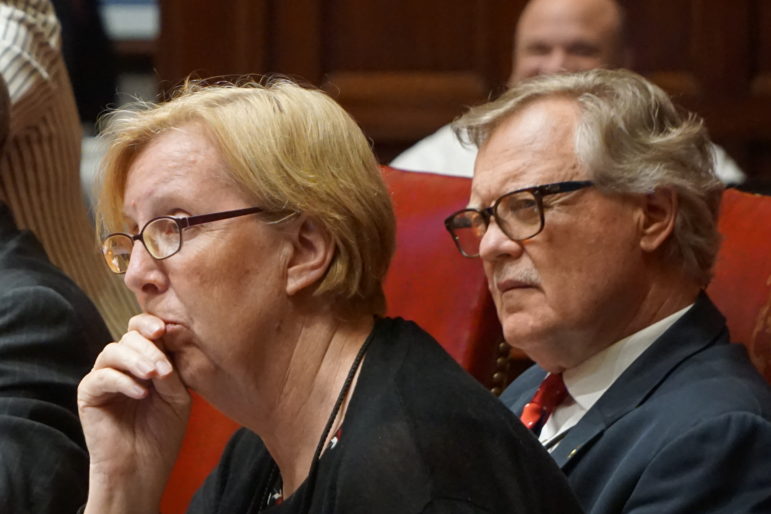 Connecticut has a cap designed to keep state spending from growing faster than household income — but it only applies to spending within the budget. And while a few line items, such as debt payments, are cap-exempt, the education partnership is not.

To work around the cap, Lamont wants legislators to designate $20 million in revenues — such as tax and fee receipts — for the partnership, “intercepting” those dollars before they are formally assigned to the budget. Because this accounting technicality could be used — at least in theory — to move most spending outside the cap, it generally is used sparingly.

Lamont also sought, and received, a spending cap work-around for the partnership contribution last June when legislators adopted his first budget. The governor initially said he would fund Connecticut’s participation in the program out of reserves, which would subject it to the spending cap.

Now, after watching the governor seek cap relief two years in a row, Lamont’s fellow Democrats in the legislature’s majority are pushing back.

“Legislators always like to have their priorities in the budget and will be concerned if none of their issues are addressed.”

Fonfara, who has been at odds with Lamont over state borrowing for much of the past year, is especially critical of the cap work-around. Fonfara has charged that the governor’s proposed “debt diet” will hinder economic development and affordable housing efforts in many communities, particularly poor cities and towns. Lamont counters that Connecticut already has one of the highest bonded debt burdens, per capita, in the nation.

As co-chairwoman of the Appropriations Committee, part of Sen. Cathy Osten’s job is to tell many colleagues their funding requests will be scaled back or denied altogether.

“Legislators always like to have their priorities in the budget and will be concerned if none of their issues are addressed,” Osten, D-Sprague, said. But when legislators hear the governor may get an exception from the spending cap, and that they likely cannot , “the process is more difficult,” she said.

When contacted for comment, the partnership said the spending cap issue is a matter to be resolved by the governor and legislature.

“What we should be focusing on is not the investors, but rather the taxpayers.”

Deputy House Minority Leader Vincent J. Candelora, R-North Branford, said rather than assuring philanthropic groups that the spending cap won’t get in the way of the education partnership, the governor should be building confidence with another group.

“What we should be focusing on is not the investors, but rather the taxpayers,” Candelora said, adding that the spending cap workaround only exacerbates an existing transparency problem involving the partnership. 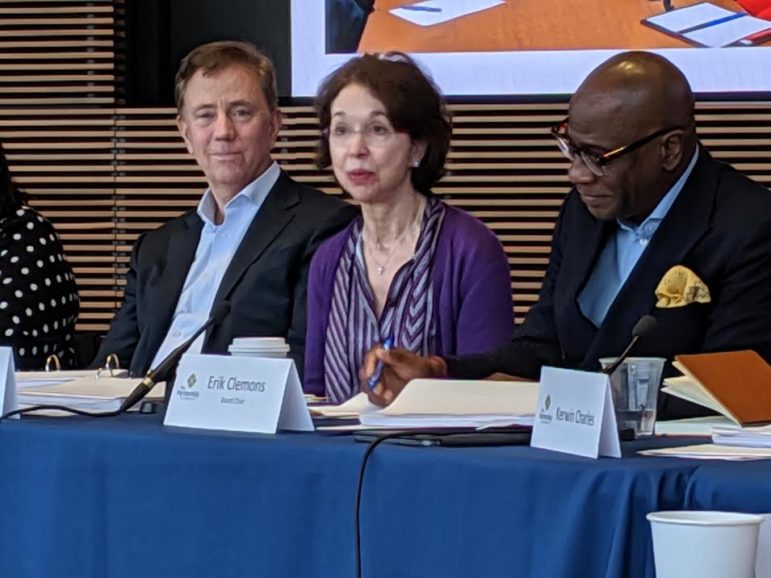 Barbara Dalio makes a point during a meeting of the Partnership for Connecticut. At left, is Gov. Ned Lamont, a member of the private-public partnership board, and Erik Clemons, who is chairman of the board.

The legislature granted a request from the Dalios and Lamont last June and exempted the partnership both from state ethics and disclosure rules — a move that has divided lawmakers.

Candelora was the first to expose that arrangement, which was included in an omnibus budget bill.

“These corporate board-holders are going to go up to the balcony and sprinkle down dollars on, I guess, the peasants of Connecticut, and we’re supposed to be happy about that?” Candelora said during a June 3 House debate on the budget.

Sen. Mae Flexer, D-Windham, is spearheading a bill this year to cancel those exemptions.

The partnership announced Monday that Barbara Dalio would host at least 16 community meetings across Connecticut this spring to discuss the program’s goals.

But she and other advocates of the privacy arrangement say Connecticut’s schools cannot be fixed without tackling many sensitive issues, and these talks are more likely to be productive behind closed doors.

“I represent some of the poorest towns in the state of Connecticut and any improvement that’s been made in those systems has come from the public discussing it — parents and students and teachers working together with the state to find creative solutions,” Flexer said. “Darkness doesn’t improve anything.”

Flexer is co-chairwoman of the legislature’s Government Administration and Elections Committee, which will hold a public hearing Friday on the partnership transparency bill.