Washington-– Rep. Jim Himes and  Sen. Richard Blumenthal are among a number of lawmakers, both Democrats and Republicans, who said they are both frustrated and concerned by administration reports that the health-care system is not capable of handling large volume coronavirus testing.

Blumenthal said Thursday he has been told by the attending physician of Congress, Dr. Brian Monahan, that 70 million to 150 million people would contract the COVID-19  in the United States. But those estimates are guesswork because of “insufficient testing,” Blumenthal said.

Himes, D-4th District, said the lawmakers learned some new things about the virus in a closed-door briefing of House members Thursday, but  also said Trump administration officials did not provide answers to the critical question he and other lawmakers get asked every day: “Am I going to be able to get tested?”

“So, I don’t think we have confidence in an answer there,” Himes said. “If anything, there was a little bit of anxiety.” Rep. Anna Eshoo, D-Calif., came out of the meeting with a similar impression, saying the briefing “was coated with confusion.” 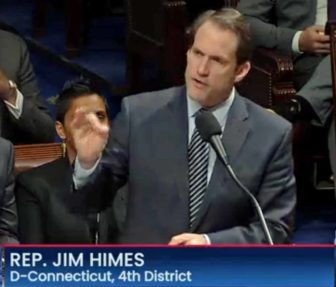 Rep. Jim Himes says Trump officials can’t answer critical question asked by constituents,’which is, am I going to be able to get tested?’

See related story: Connecticut’s limited testing could hamper its ability to slow the spread of COVID-19 in the general population, experts say.

Lawmakers were briefed by nine administration officials, including Seema Verma, administrator of the Centers for Medicare and Medicaid Services; Steve Redd, senior advisor for COVID-19 response at the Centers for Disease Control and Prevention and Anthony Fauci, director of National Institute of Allergy and Infectious Diseases.

The question of testing has been raised by lawmakers at a rash of congressional hearings – and the lack of a clear answer to why the United States has lagged behind other nations in testing has frustrated members of Congress.

Himes said health officials told lawmakers the United States can now test 16,000 people a day, but South Korea, a much smaller nation, tests 10,000 people a day. “So that makes you nervous that people who should get tested won’t be able to,” Himes said.

Himes said the nation’s top health officials did not make any projections on the percentage of Americans who are likely to contract the virus.

At a congressional hearing Thursday, Fauci admitted the U.S. coronavirus testing system is flawed. “The system was geared for the individual doctor, patient. What we’re going through now transcends that. We need to do more than that,” the nation’s top epidemiologist said.

Fauci also said he hopes to announce in the next few weeks that the first American has been injected with a coronavirus vaccine, the beginning of clinical trials. But he stressed that it would take another year or a year and a half before the Food and Drug Administration could make sure the vaccine works.

After an administration briefing to senators on Thursday, Sen. Richard Blumenthal, D-Conn. also said there is deep frustration about the availability of testing kits. “We lost more than two months because of the lack of testing and the failure of this administration to face the truth,” he said.

He also said “this briefing today provided no specifics, no plan and no strategy, which is appalling and astonishing.”

Blumenthal said “there ought to be a commission” to investigate “where the federal government went wrong and how to prevent it from happening again.”

Meanwhile, Sen. Bill Cassidy, R-La., a gastroenterologist, said the CDC has told him it doesn’t have the  capability to do “track and trace” of coronavirus like they do in South Korea and Taiwan.

Connecticut has received two testing kits from the CDC, each capable of between 500 and 600 tests. Before receiving the second test last weekend, Connecticut limited testing to those who had traveled to certain countries and had become ill,  even though the CDC recommended broader testing.

This week, commercial labs, including LabCorp and Quest Diagnostics, have begun to administer coronavirus tests, but only on a doctor’s order.

According to CDC guidelines, doctors are limited to prescribing testing only for those who have exhibited the flu-like symptoms of the disease.

Fauci said the CDC is currently trying to set up broader testing in six cities. Instead of waiting for people to require doctors to prescribe a test, the CDC will test all patients who have flu symptoms  to try to estimate how much of the U.S. population has the virus.

The virus has now spread across 44 states and Washington, D.C.