Connecticut’s coronavirus firsts: a death, and a nursing home case 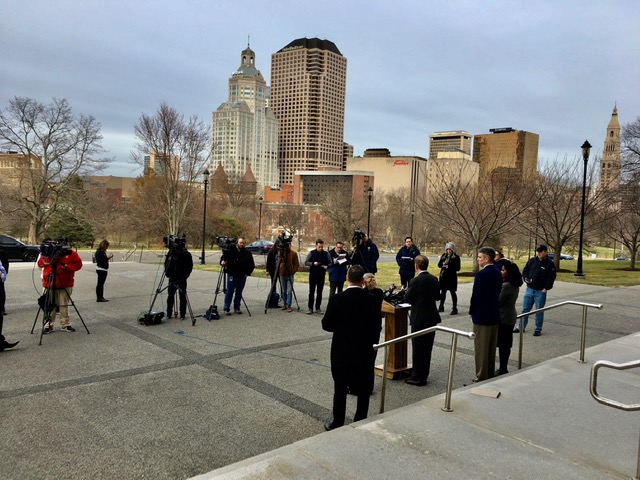 Gov. Ned Lamont conducted his daily coronavirus briefing outside the Capitol with social distancing in mind.

Connecticut recorded its first coronavirus death Wednesday, an 88-year-old man who was hospitalized in Danbury after falling ill in a Ridgefield assisted-living facility, and state public-health staffers were dispatched to Stafford Springs at the other end of the state to investigate the first confirmed case in a nursing home.

The state now has 96 confirmed cases of the COVID-19 coronavirus and officials assume the spread is far greater, but the positive test of a resident at the Evergreen Health Center in Stafford Springs was a worrisome milestone, given the threat of the virus to older people.

“We know that people of an advanced age and in certain conditions are among the most at risk of this disease, however I urge everyone in Connecticut – regardless of age or condition – to take an active role in doing their part to reduce the spread of this virus throughout our communities so we can protect one another,” Gov. Ned Lamont said.

Lamont, who held his daily briefing outside the State Capitol as a social-distancing measure, offered condolences to the family of the dead patient and acknowledged the broader impact on a state still struggling to absorb the breadth and depth of an unprecedented health crisis.

The first fatality was a man who lived at Benchmark Senior Living in Ridgefield, a community on the New York border. The Evergreen nursing home patient, who was hospitalized Monday at Johnson Memorial Hospital, was in a short-term unit that has since been quarantined, according to Tim Brown, a spokesman for Athena Health Care Systems, the owner of the 180-bed home.

“We have requested testing for each of our staff members and residents, and are awaiting further guidance from the state.  We have also requested additional personal protective equipment that will be needed in the weeks ahead through our trade association that is coordinating with the state,” Brown said.

It was not clear how long the patient had been at Evergreen. Brown said the company has been restricting visitors and following the other precautions urged by the state.

“At the start of this pandemic, we initiated a series of protections aimed at mitigating the threat of coronavirus at our center,” Brown said. “These include restricting visitors from Evergreen, taking the temperature of anyone who enters the facility, requiring anyone who enters the facility to complete a health questionnaire, and increasing monitoring of all residents every day.”

Benchmark said in a statement that their resident was hospitalized Monday and diagnosed with the coronavirus.

“Upon receiving this news, we immediately contacted state and local health authorities. We quickly enacted our COVID-19 outbreak plan, which includes promptly quarantining the residents who had high exposure to this individual. We are following health department and medical guidance to address the associates who had exposure to this resident by having them stay out of the community,” the company said.

Lamont joined the governors of  New York, New Jersey and Pennsylvania  on Wednesday in jointly ordering the closure of shopping malls, bowling alleys and amusement parks, the latest effort by governors to act regionally during the coronavirus pandemic.

“This is a fast moving and quickly evolving public health emergency, and making these kinds of important decisions as a region makes more sense than a patchwork approach,” Lamont said. “We will combat this virus by working together and remaining consistent across our borders and I’m proud to work with my fellow governors in this effort.” 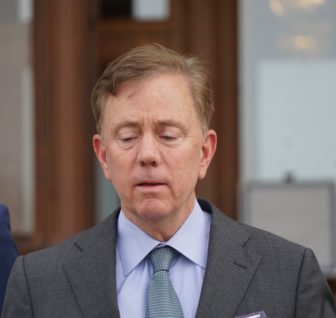 The latest closure order takes effect at 8 p.m. Thursday and is the latest in a series of emergency measures that have brought commerce to halt as COVID-19 takes hold in the U.S.

The state Department of Labor reported another 12,000 unemployment claims in the 24-hour period ending at 4 p.m. Wednesday, bringing the total to 32,000 since Friday. Deputy Labor Commissioner Daryle Dudzinski described the crush as  “unprecedented claim activity.”

The action Wednesday is an expansion of the orders the tri-state governors issued Monday. Those orders – which Pennsylvania has also adopted – limits crowd capacity for public gatherings to 50 people. The governors previously ordered restaurants and bars to close for on site service, while allowing take-out and delivery services. They also temporarily closed movie theaters, gyms, and commercial casinos.

The orders did not apply to Connecticut’s two tribal casinos, Foxwoods Resort and Mohegan Sun, but the sovereign tribes voluntarily closed the facilities Tuesday night at Lamont’s urging.

Gov. Andrew Cuomo of New York, who has clashed with President Donald J. Trump on Twitter, contrasted the regional effort with what he called a federal failure. All four governors acting jointly are Democrats.

“In the absence of national standards, we are doing everything we can as states to reduce density and contain the spread of the virus,” Cuomo said. “It is critical that we remain on the same page as our neighboring states, and so far we are the only region in the country partnering to create uniform, regional density reduction policies that prevent ‘state shopping.’ We will continue working together to update our regulations and guidance as the situation evolves while keeping a consistent standard across the region.”

At his briefing, Lamont expressed both frustration with the federal government and gratitude that some much-needed supplies were about to be provided in response to a request made March 11.

The governor applauded Trump for invoking the Defense Production Act, a Cold War era law empowering the federal government to control the production and distribution of scarce materials essential to the nation’s defense. Trump indicated he had no immediate plans to utilize the powers granted to him under the law. He said in a Tweet that it could be invoked in “a worst case scenario in the future. Hopefully there will be no need, but we are all in this TOGETHER!”

Lamont urged health care providers not involved in immediate, life-saving care who might have those supplies to share them with acute-care hospitals.

The governor had previously joined with Cuomo and New Jersey Gov. Phil Murphy to devise a uniform policy of banning public gatherings of more than 50 and closing restaurants and bars, while allowing them to sell take-out meals.

Joining the tri-state group Wednesday was Pennsylvania Governor Tom Wolf, who had been talking with New Jersey officials about a coordinated response on closings.

Lamont has now signed six executive orders under the authority of the public-health emergency he declared a week ago, affecting a broad swath of state government and the private sector. In addition to closing malls, the latest order allows Medicaid to cover audio-only tele-health services, provides flexibility for conservators to ensure the safety of nursing home patients, exempts certain schools inside state facilities from the statewide school cancellation order.

The  State Police announced Wednesday they are closing their headquarters and regional troops to the public for non-emergency purposes.

At the headquarters in Middletown, the public will be allowed to enter in small numbers for the following services:

The 11 State Police troops located across Connecticut will be open only for walk-in concerns and emergencies.

Chief Court Administrator Patrick L. Carroll III announced further closures in the court system, a decision made with Chief Justice Richard Robinson. Only one courthouse will remain open in the state’s 13 judicial districts for priority cases, and juvenile matters will be restricted to the Hartford and Bridgeport juvenile courts.

“These are extraordinary times and require extraordinary measures,” Carroll said. “Our overarching challenge throughout the crisis has been to balance the constitutional obligation of the courts to remain open with protecting the health and safety of every individual who enters a state courthouse. Ultimately, we have determined that the plan announced today is the best option to achieve this balance.”

The list of open courthouses is on the system’s web site.

Department of Energy and Environmental Protection

“Supermarkets and grocers are focused on keeping the shelves stocked for their customers during a time of increased demand, engaging in enhanced cleaning measures to prevent the spread of the novel coronavirus (COVID-19) and may face worker shortages as they strive to keep their employees and their families safe much like other businesses and institutions during this challenging time,” DEEP said.

The department’s offices also are closed to the public, and the majority of its staff is working from home.

The department is encouraging the public to use DEEP’s online services:

Access to DEEP’s records center at 79 Elm Street, Hartford is not available to the public, but certain records may be available for retrieval depending on staff availability. Requests for records should be sent to DEEP.RecordsCenter@ct.gov.

3 thoughts on “Connecticut’s coronavirus firsts: a death, and a nursing home case”