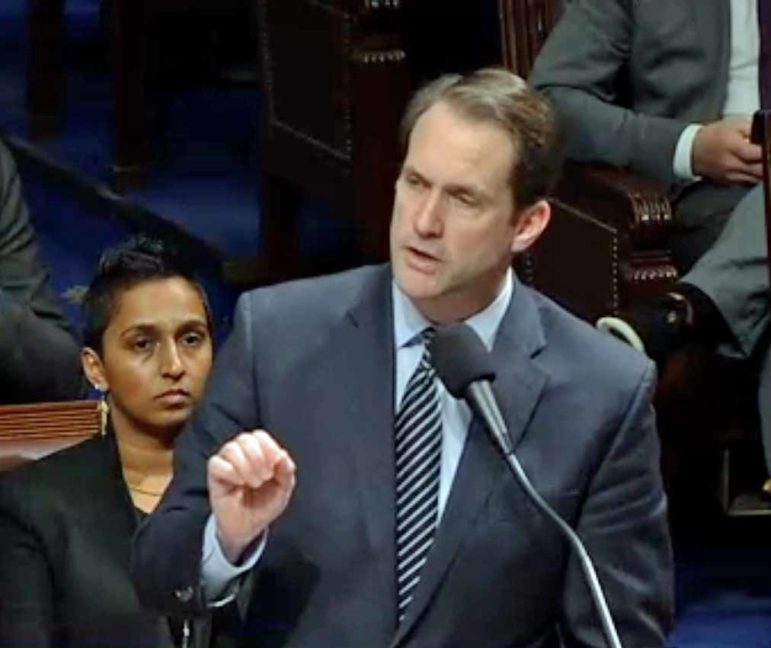 Washington — Rep. Jim Himes, the go-to guy when  U.S. House colleagues have questions about Wall Street, says the federal government must act quickly to stem the nation’s economic decline, rushing money to Americans on the “suffering frontier” of the coronavirus epidemic.

The crises has sent the stock market tumbling, provoking chaos on Wall Street and helping push the nation toward  recession. That has prodded the White House and Congress to propose a flurry of measures aimed at propping up a sinking economy.

“There are some creative ideas out there,” Himes said.

The representative of most of Fairfield County in Congress was once a banker in Latin America and New York for Goldman Sachs, rising to the position of vice president.

In the U.S. House, Himes is a member of the House Financial Services Committee, where he sits on the subcommittee with authority over investor protections and capital markets

The nation may not have met the official definition of recession yet, which is two quarters of a significant decline in economic growth. But Himes said there is urgency in addressing the nation’s economic decline which gets steeper by the day as  an avalanche of businesses shutter, workers are laid off and consumer demand dissipates.

“For me, it feels like the start of a very, very difficult economic period,” he said. “We’ve already seen the unemployment rate skyrocket overnight in Connecticut.

Himes said the best way to stem the economic bleeding is helping struggling Americans and Main Street survive the coronavirus crisis. “The most effective thing the government can do is put money in the hands of those who are suffering –immediately,” he said.

His says putting money in the hands of struggling Americans will boost local economies as that money is spent on food and other necessities.  The idea has bipartisan appeal.

“For me, it feels like the start of a very, very difficult economic period.”

President Donald Trump and Democrats in Congress are competing to fashion the most generous plans to make direct payments quickly to Americans.

Several Democrats, including Sen. Chris Murphy, have called for sending $2,000 checks to each American to cope with the coronavirus crisis.

On Wednesday, White House officials were working with congressional Republicans on the next emergency stimulus package that could send two $1,000 checks to most Americans except the wealthy.

Himes also says Congress’s increase of the duration of unemployment benefits by 26 weeks and the extension of those benefits to furloughed workers and others who are not now eligible will also boost the economy. The increased unemployment benefits are in a  coronavirus package approved by the U.S. Senate Wednesday and sent to the president.

“By definition people who are receiving [unemployment benefits] are in a hard way,” he said.

Himes said the federal government should also funnel money to organizations that help the most vulnerable, including community health centers and programs that help the homeless.

“The key is making sure that the people on the suffering frontier’s needs are addressed first,” he said. “And when you  address their needs you do two things. You make their lives better and you also make them economic participants. They will start buying things which will have a positive economic effect.”

Another way Washington D.C. could help the local economy is to loosen restrictions on the use of food stamps.

“What if you allow food stamps usable in certain restaurants?” he asked. “Now you are not only helping an individual, but you are helping small businesses.”

After helping individuals and families in need, Himes said the federal government should address the biggest problem the coronavirus epidemic has posed to both small and larger businesses – access to capital to keep their operations going.

“The second thing that’s really important is doing all you can do to keep credit flowing in the economy,” Himes said. “Credit is the blood in our economic circulatory system.”

Himes said “you need programs like what the Treasury Secretary announced yesterday and probably many other programs. … We want to make sure we don’t have a credit freeze that could crush businesses and crush people,” he said.

Treasury Secretary Steven Mnuchin on Tuesday said the Federal Reserve will provide aid to companies that are having a hard time getting the short-term funding they need to operate.

The nation’s central bank announced it would create a special credit facility to purchase commercial paper from issuers that have been having a difficult time finding buyers on the open market. Corporate paper involves unsecured short-term loans businesses depend on to continue operations.

Mnuchin said the program could total $1 trillion, though he does not expect it to reach that high.

Meanwhile concerns about the nation’s economic health continued  on Wednesday as plunging stock prices forced the S&P to stop trading for 15 minutes and Mnuchin told lawmakers the  employment rate could spike to nearly 20 percent from the roughly 3.5 percent  it notched in February.