Trump wants normalcy. Lamont, Cuomo warn the worst is yet to come 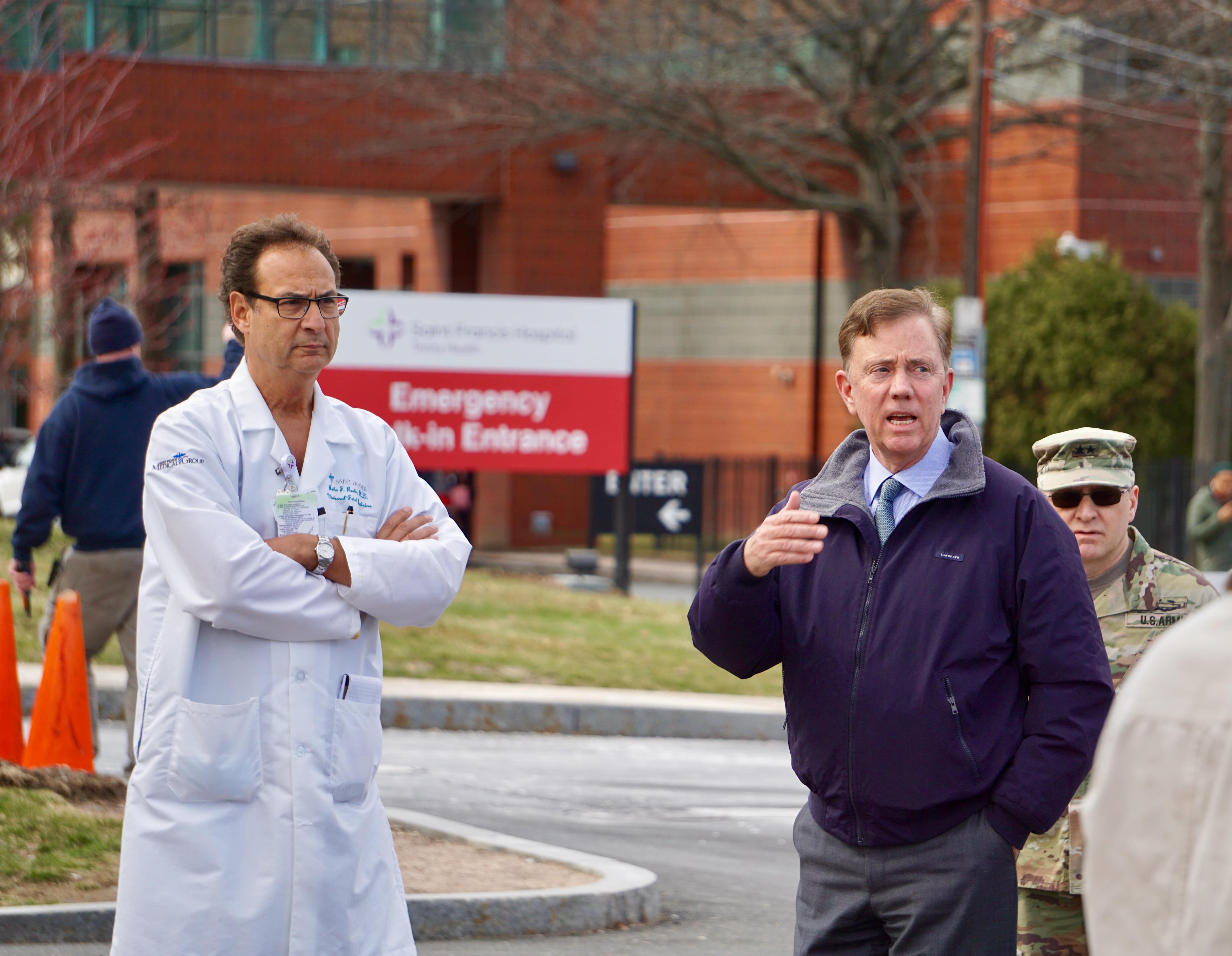 On a day when Gov. Ned Lamont watched a mobile field hospital go up on the grounds of a Hartford medical center in anticipation of a surge of COVID-19 cases, President Donald J. Trump told America it soon may be time to go back to work.

The U.S. heard startling contradictory assessments Tuesday from its president and governors about low long the nation should expect to live with restrictions on social life and commerce to slow the spread of a global pandemic now centered in New York City.

Trump told a televised audience he would “love to have the country opened up and just raring to go by Easter,” while New York Gov. Andrew Cuomo warned that the cases in his state were doubling every three days, a harbinger of a deepening medical challenge. They topped 25,000 by midday Tuesday.

Ultimately, the decisions to restrict public life lay with governors, and Lamont sees only cause to tighten the limits. His commissioner of economic and community development is preparing a relief plan.

“I come down with the governor of New York,” Lamont said. “We have a health care crisis.”

The governors of Rhode Island and Massachusetts are lining up with other northeastern states like Connecticut, New York, New Jersey and Pennsylvania that have ordered the closures of schools, theaters and shopping malls and either urged or ordered companies to send home all but their essential workers. Maryland also recently closed non-essential businesses.

Maryland Gov. Larry Hogan, a Republican who is chairman of the National Governors Association, complained to CNN before the president spoke, “Some of the messaging coming out of the administration doesn’t match.”

Lamont said he is cognizant of the economic impact and has tried to strike a balance, stopping short of a complete cessation of movement, work and shopping, while keeping a careful eye on the explosion of cases in metro New York that already is being felt in Fairfield County, which has recorded 384 of Connecticut’s 618 laboratory-confirmed cases.

“We know it’s coming up the coast pretty quickly right now,” Lamont said. “Look, we’re going to get  through this. This is why I spend a lot of time talking about the next day, the day after once we are through this.”

David Lehman, the governor’s economic adviser and commissioner of economic and community development, briefed legislative leaders by telephone Tuesday about short-term assistance the Lamont is preparing for businesses forced to close. In the space of a week, Connecticut has lost about 100,000 jobs, at least temporarily.

“We’re all incentivized to get back to normal as quickly as possible,” Lehman said.

But Lehman, who left Goldman Sachs to the join the Lamont administration a year ago, said in an interview that the administration must continue to view the crisis through the lens of a public health emergency, not an economic one. It is a message that governor reinforced at Tuesday’s daily briefing.

“You’re not going to get your economy back on its feet until we solve this public health crisis in a serious way, so I don’t want to mislead people that, ‘Hey it’s just going to be another couple of weeks and then you get back to business as usual.’ That’s a mistake,” Lamont said. “I think the federal government has been sending that wrong message for too long.”

Lamont, 65, a Greenwich businessman who took office in January 2019, is attuned to the sensibilities of the business community and the close economic relationship southwestern Connecticut has with New York in general and Wall Street in particular.

His administration has felt pressure for being both too tight and too lax in its restrictions.

The governor took pains to note that Connecticut was not closed when he sent out a recorded message to nearly every telephone in the state, as well as in a video message he posted on the state’s web site and circulated on social media. And the state’s list of essential businesses that may remain open is extensive — though not extensive enough for many businesses.

“We’ve had several hundred requests for exemptions,” Lehman said. “The reality is there is a balance here. We need to be mindful there is a cost.”

One of the legislators on the call with Lehman was Rep. Vincent J. Candelora, R-North Branford, who owns a sports complex that is closed as a result of Lamont’s restrictions. Candelora said there is no uniform business reaction to the public-health emergency orders

Rep. Dave Rutigliano, R-Trumbull, who owns seven restaurants, said a struggle for him is the open-ended nature of the closing order and the rumors of how long they might be extended — maybe restaurants will be closed all summer, schools until the fall.

But what will be the metrics that indicate it’s safe to loosen the restrictions? The governor was unsure Tuesday.

“I understand. I guess that’s a tough decision,” Rutigliano said. “But there is an arc to everybody’s illness, maybe a predictable arc. Maybe there should be a quarantine in hotspots. Maybe in some of the less affected areas, you might allow a slow return. Maybe that works.”

“I’ve been in business for just under 24 years,” he said. “We’ve been lucky. I’ve never laid anybody off. Even if we closed a location, we found them jobs.”

Rutigliano opened his first place in Norwalk, then branched up Route 8 to Oxford and I-95 to Branford. One of his restaurants is in Fairfield. When the first call for social distancing came out, business dropped by as little as 15% in some places and as much as 70% in others.

He has business interruption insurance which would cover him in a hurricane — but not a pandemic.

“We can’t wait for the federal package,” Fasano said.

Fasano is a lawyer who also owns a beach club that was damaged in two coastal storms, Irene and Sandy. He recalls dealing with the Small Business Administration for help in recovering. With no certain date for re-opening, SBA loans hold little attraction for most small business owners. And dealing the SBA was time-consuming.

“For me, it was a six-month process,” Fasano said. “I think David Lehman is right — try to get some short-term help very quickly, help them keep their heads above water.”

Lehman and Paul Mounds, the governor’s chief of staff, are conducting regular calls with Democratic and Republican leaders, who generally have been supportive of the measures taken so far by the Democratic governor.

Fasano said he appreciates that Lamont’s restrictions are not as tight as those in California or New York.

Candelora said he hopes the state is weighing what will mark a turning point in the pandemic, one that allows a resumption of some economic activity now suspended.

Cuomo, even while sounding an alarm about a surging caseload, broached a similar idea. At some point, he said, there may be a reconsideration of who can return to work: perhaps the young, who are not as vulnerable; perhaps, the young and those recovered from the disease and are now immune.

Lamont said Connecticut is attempting to mass purchase thermometers, anticipating a day when they will be needed for screening to allow residents to return to work.

Like Cuomo, Lamont did not say when that might be. But they are not joining the president in aiming for Easter. This year, it falls on April 12.

3 thoughts on “Trump wants normalcy. Lamont, Cuomo warn the worst is yet to come”