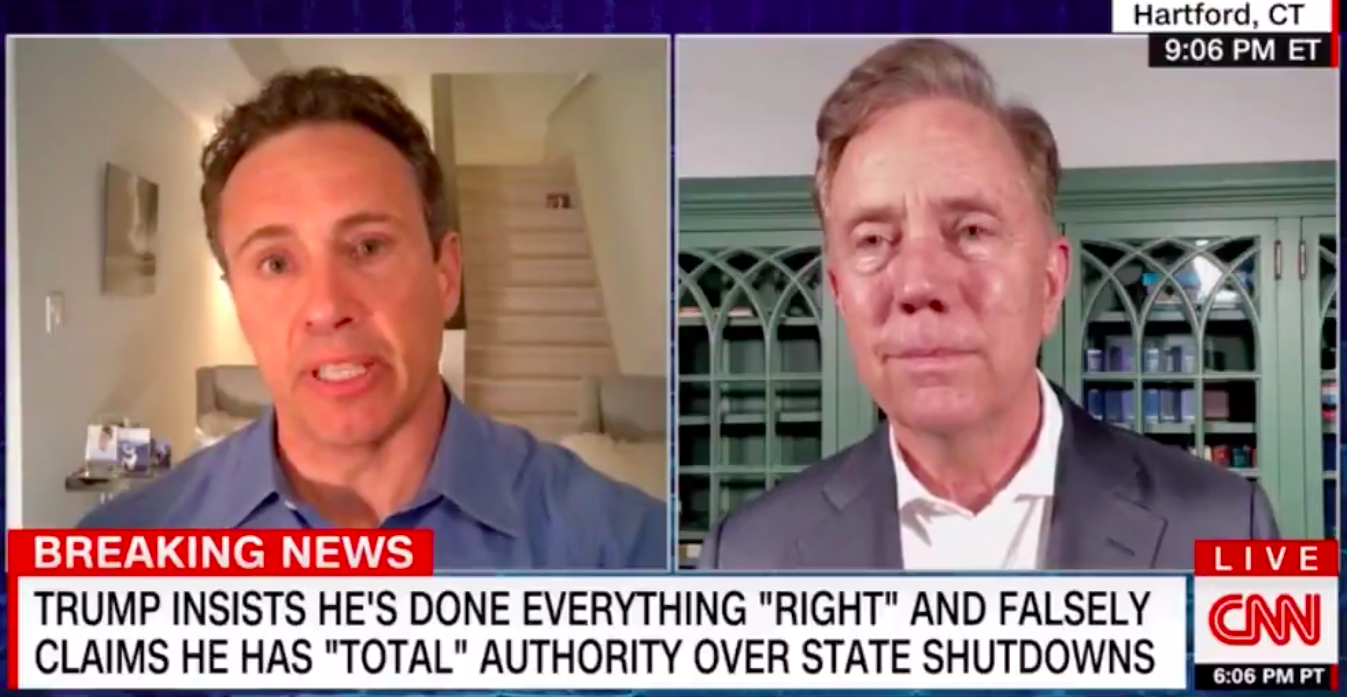 Gov. Ned Lamont was uncharacteristically caustic towards President Donald J. Trump in a live CNN interview Monday night in response to the president’s surprising assertion that he has the authority to overrule the nation’s governor’s on easing COVID-19 restrictions.

Courts have upheld the power of state and local governments to issue and enforce quarantines and other extreme measures in public health emergencies, and reporters quickly challenged Trump’s statement.

“I”ll tell you what I saw when I heard that: This is a president who likes to throw verbal grenades,” Lamont said.

The governor didn’t wait for a question to take issue with the president. His interviewer was Chris Cuomo, the brother of New York Gov. Andrew Cuomo, who helped organize the northeastern governors who agreed Monday to work collaboratively on finding the best ways on when and how to ease their closure orders.

Lamont suggested that Trump’s assertion he had the right to overrule the state-by-state closure orders was especially stunning coming weeks after hinting he was considering a presidential order from a completely different direction: A quarantine sealing off parts of New York, Connecticut and New Jersey from the rest of the U.S.

“Two weeks ago he told your brother and myself, ‘I want a mandatory quarantine of the New York metropolitan area.’ And we called him up and talked him down and got something a lot more reasonable,” Lamont said. “Now, two weeks later he wants a mandatory opening up of everything. I just think he likes us to run down these rabbit holes.”

Lamont was engaging in a bit of hyperbole in that Trump has yet to attempt to force “a mandatory opening up.” Rather, the president insisted he has that authority, a reaction to the creation of gubernatorial coalitions on the east and west coast to take on the question of how to reopen commerce.

State and federal governments have varying degrees of responsibility and power in public health emergencies, and all orders closing schools, bars, and restaurants to combat the spread of COVID-19 have come from governors and mayors, not Trump.

“The governors are going to make the determination of what’s best for their state,” Lamont told Cuomo. “We care deeply about the health and safety of our citizens,  and we are going to get our economy going in a prudent, thoughtful way.”

Trump has the platform, but the governors have the authority when it comes to public-health orders, Lamont said.

“He’s got the bully pulpit, but we’re the ones who have to enforce it. Everybody knows it’s the governors where the rubber meets the road. I think every governor knows what it takes to get it done,” Lamont said.

Lamont noted that COVID-19 cases and hospitalizations still are rising in Connecticut, though not as quickly as two weeks ago.

“The boat is very tippy right now, and this is the time for steady leadership,” Lamont said. “So let’s not throw any more of these verbal hand grenades.”

On a conference call hosted by Andrew Cuomo, the governors of Connecticut, Delaware, New York, New Jersey, Pennsylvania and Rhode Island reinforced the notion that the decision to reopen their states is one for governors, not the federal government, though they largely refrained from direct criticism of the president. Their coalition was joined later by a Republican, Gov. Charlie Baker of Massachusetts.

The governors are aware that comments on cable news are closely monitored by the White House, and Chris Cuomo said he thinks twice before asking questions that may put a governor “sideways” with the president. His brother, Andrew Cuomo, called a different CNN interviewer, Erin Burnett, on Monday night to suggest Trump was acting like a sovereign.

“We don’t have a king,” he said. “We have an elected president.”

Lamont closed out his night on MSNBC with Lawrence O’Donnell, striking a more conciliatory tone in relating how the president reacted constructively two weeks ago to him, Cuomo and New Jersey Gov. Phil Murphy arguing against a metro New York quarantine.

“We reached an agreement that was workable for all of us,” Lamont said. “I’d like to think that’s where we’re going to end up on opening our states as well.”