An eight-hour fire drill: How the governors of CT, NY and NJ scrambled to avert a quarantine

The craziest day in the crazy time of the coronavirus 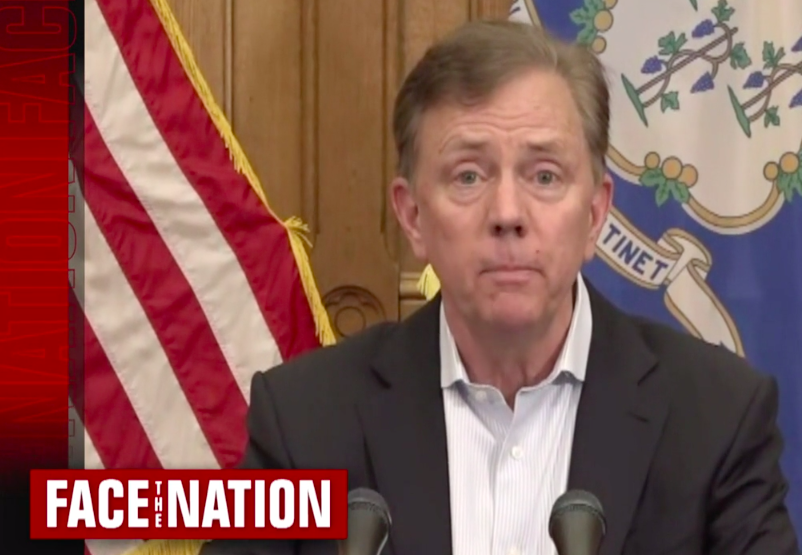 Gov. Ned Lamont’s restrained rebuke of the president was featured on “Face the Nation.”

CBS’ “Face the Nation” opened Sunday with a clip of Gov. Ned Lamont soberly reacting the previous evening to the surreal possibility that the president of the United States might quarantine Connecticut, New York and New Jersey to protect the rest of America from COVID-19.

“Words matter,” Lamont said in the snippet, taken from his televised briefing on Saturday. “And those words have created a certain amount of confusion. And when you lack clarity, that can create confusion. And confusion can lead to panic.”

Eight hours of frantic calls between Hartford, Albany, Trenton and Washington would end a little after 9 p.m. Saturday with the Centers for Disease Control and Prevention issuing a mildly worded “domestic travel advisory for New York, New Jersey and Connecticut.”

It urged, not ordered, residents to refrain from non-essential travel for 14 days, and the advisory concluded with these words, “The Governors of New York, New Jersey, and Connecticut will have full discretion to implement this Domestic Travel Advisory.”

There would be no closure of bridges and highways, no checkpoints. No quarantine.

And so ended the craziest day in the crazy time of the coronavirus, one that would underscore Lamont’s careful approach to the Trump administration and the working relationships he has struck with the governors of New York and New Jersey.

Saturday was going to be a light day for Lamont.

His staff intended to skip the daily televised briefing on the spread of the novel coronavirus, instead emailing reporters when the Department of Public Health’s website was updated with the daily tally of laboratory-confirmed cases, current hospitalizations, and deaths.

The original plan for the weekend was to hold two events Sunday, a visit by the governor to a Guilford company accelerating the manufacture of hospital ventilators to be followed by a briefing looking ahead to the coming critical phase in the pandemic for Connecticut — a surge in hospitalization projected to peak in mid-April.

Paul Mounds, the governor’s chief of staff, had just settled his two-year-old son in for a nap when his phone buzzed with text messages from Max Reiss and Rob Blanchard, the director and deputy director of communications.

One in the thread jumped out: “We’re about to get flooded with inquiries.”

Reiss had just seen a breaking news alert on his Twitter feed from the NBC affiliate in New York: President Donald J. Trump was considering a quarantine on New York and possibly New Jersey and Connecticut, a shock to the tri-state governors and their staffs.

Minutes later, NBC News tweeted a clip of the president pausing on his way to his helicopter, mentioning the possibility of a quarantine, while offering no sense of what that might mean or whether it was a serious option. It seemed off the cuff.

Mounds called the Executive Residence and told a staffer to inform Lamont, then left his home in Glastonbury to drive to the Residence in Hartford. On the way, he called his counterpart in New Jersey, who also was driving to meet his boss, Gov. Phil Murphy. Neither state leader had been alerted to the possibility of a quarantine.

New York Gov. Andrew Cuomo was in the midst of his daily briefing when a reporter asked about the president’s remarks. Cuomo was puzzled. He had spoken to Trump before meeting with the press to talk about dispatching a U.S. Navy hospital ship to New York. Cuomo said the president made no mention of a quarantine.

“I don’t even know what that means,” Cuomo said.

In rapid order, the president tweeted his consideration of a tri-state quarantine, then mentioned it again during a press conference in Norfolk, Va., where he had flown to see off the hospital ship en route to New York.

Mounds reached a White House contact who downplayed the possibility, even though the Trump had now mentioned it three times and promised on Twitter, “A decision will be made, one way or another, shortly.”

The calls continued all afternoon among the senior staffs of Lamont, Cuomo and Murphy, as well as the between the governors themselves.

They compared notes and settled on a common message for public consumption and to be impressed on the White House: A regional quarantine was unnecessary, given the restrictions already in place, and floating the idea of a lockdown could cause panic. It needed to be clarified quickly.

Mounds was able to go higher up the White House food chain, reaching a senior aide who assured him that nothing was final.

Municipal officials like Mayor Mark Boughton of Danbury, a city on the New York border that has nearly 200 laboratory-confirmed cases of COVID-19, waited for clarification. He would say later, “There’s no question that President Trump’s statement, even as thinking out loud, could put this region into a tailspin.”

“Regarding the President’s consideration of a quarantine of New York, as well as parts of Connecticut and New Jersey, our state has already called on residents to stay at home. Further, if interstate travel is absolutely necessary, our state has directed travelers to self-quarantine to prevent against further transmission of the virus.

“I have been in close communication with Governor Cuomo and Governor Murphy, and I look forward to speaking to the President directly about his comments and any further enforcement actions, because confusion leads to panic.”

In a live interview on CNN at 5:35 p.m., Cuomo pushed a little harder, questioning the legality and practicality of a lockdown.

“It couldn’t work,” Cuomo said. “It would be chaos and mayhem.”

Cuomo was using CNN to talk to the White House, just as Lamont has done in cable interviews in recent days. Each time Lamont spoke on cable, the White House reached out to the governor’s staff, addressing the topic raised during the interview.

At the State Capitol in Hartford, Lamont walked into the Old Appropriations Room a little after 6 p.m. The room has been converted into a limited-access TV studio where the governor and reporters could remain at a safe social distance.

He gave a cursory update on the new confirmed cases, speaking only for 28 seconds before turning the real subject of the briefing.

“I really wanted to come in this evening to talk about something else, ‘cause the president had a passing comment on his way to the helicopter, then he re-tweeted that he was considering, quote, a mandatory quarantine for New York City, New Jersey and parts of Connecticut,” Lamont said. “And words matter. Those words have created a certain amount of confusion.”

It was a rebuke. Gentle, but a rebuke nonetheless.

“So, let me tell you what I know and what I don’t know,” Lamont said, sharing details of some of the calls he had with governors “as we try to read those tea leaves.” He conjectured that the president was thinking out loud, not really considering federally mandated limits on the movements of millions of Americans.

Boughton, a Republican who sought the GOP nomination for governor in 2018, said he thought Lamont struck the right tone, giving the Trump administration space to end the confusion with a travel advisory from the CDC.

The president called at 8:30 p.m. He assured Lamont of not only a cooperative approach on the question of how to limit travel, but he shared news that he would be approving Lamont’s request for a COVID-19 disaster declaration, bringing federal reimbursement. They talked for 10 minutes.

“I appreciated him reaching out,” Lamont said.

On Sunday, Lamont was ready to move on.

“By the end of the day yesterday, with good interface with the White House – talked to the president, talked to the vice president – we ended up reaching an agreement, which I greatly appreciate, which is surely what we call a transit alert, slowing things down, making sure that anybody who crosses the border has to have that 14-day quarantine,” Lamont said.

He said the travel advisory was something the three governors can enforce and will make a difference.

“I really appreciate the White House working in collaboration with the governors to make sure the orders that come out are something that A) we can enforce, and B) it’s just so important at this point in time to speak with clarity and make sure there’s no confusion because confusion can lead to panic,” he said.

A plane from Shanghai carrying N95 respirators, surgical masks and gowns, gloves and thermometers had touched down at JFK on Sunday. A White House spokesman told The New York Times that the majority of the supplies would go to New York, New Jersey and Connecticut.

Part of the proposed HEROES, Act would will funnel money to defense and intelligence companies and their top executives.