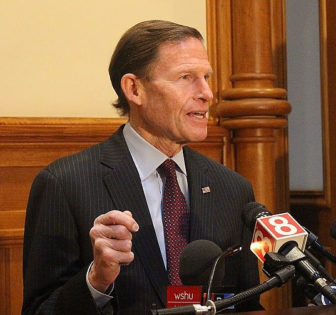 Washington – Sen. Richard Blumenthal is leading an effort to provide government aid to the nation’s struggling  local news outlets — something once considered a long shot but less so now because of the damage being caused by the coronavirus emergency.

The Connecticut senator has sent congressional leaders and top House and Senate appropriators a letter signed by 17 fellow Democrats and an independent, Sen. Angus King of Maine, asking that the next large coronavirus stimulus package include funding for local journalism. The letter says communities across the United States are at risk of losing their sources of news because of the pandemic.

The coronavirus is hurting an industry that has already suffered from a loss of advertising and readership because of the internet. Since 2004, newsroom employment has been decimated, and about 1,800 local newspapers have ceased their operations, according to a University of North Carolina report.

“In the past decade and a half, nearly one in five newspapers has disappeared, and countless others have become shells – or “ghosts” – of themselves,” the report said.

The shutdown provoked by the coronavirus has made those  problems worse, as many local restaurants, car dealerships, e entertainment venues and other nonessential businesses closed and, as a consequence, stopped advertising.

That led to a rash of journalistic pay cuts and furloughs. Dozens of local newspapers, including the Tampa Bay Times, Honolulu Star Advertiser and Aspen Daily News have cut or furloughed staff. Other news outlets have cut salaries or ended print editions.

In Connecticut, The Newtown Bee, established in 1877, discontinued printing and the Hartford Business Journal went all-digital for the time.

Broadcast journalism has been hit, too.  For instance, TEGNA, the parent company of Connecticut’s FOX61, has implemented temporary furloughs and pay cuts

He said it “plays and indispensable role in civic life,” and acts as a “watchdog” for government and the corporate world. “It is part of our lifeblood,” he said.

Congress has passed three stimulus bills to respond to the coronavirus, but none of them provide aid to local media.  The last one, the CARES Act, contained provisions to help the airlines and hotels, who’ve experienced plunging revenues, and other small businesses who’ve had to shut down or have otherwise been adversely affected by the crisis.

“If we can bail out big industry, why not a carefully structured and well-devised program for local journalists?” Blumenthal asked.

But he hasn’t set on a particular program to rescue local journalism in the pandemic, saying there are many ways to do so, including grants or government loans that are forgiven under certain circumstances.

Major media organizations in other nations have government support. The British Broadcasting System is funded through licensing fees set up by the British government; and Agence France Presse,  the world’s oldest news agency, is largely funded by the French government.

But U.S. media has been proudly independent.

Blumenthal said there would, under his plan, have to be “strict safeguards” and “firewalls” that would keep local media independent. He cited the Corporation for Public Broadcasting as an example of a media outlet that receives federal support and maintains its independence.

The senator said he hopes to win GOP support for his plan, “because this issue should be bipartisan.” But he said he has not spoken yet with any of his Republican colleagues who are scattered across the nation while the Senate is in recess.

Blumenthal said that if is he does not succeed in winning help for local journalism in the fourth coronavirus package, he will aim for the fifth one, which he said he is certain is coming. “This crisis is going to be deep and broad economically,” he said.