Klarides is leaving House, but won’t rule out a run for governor 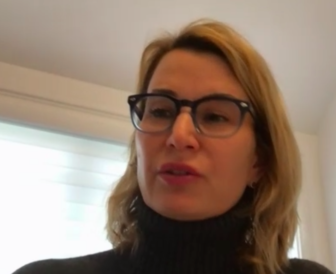 House Minority Leader Themis Klarides, R-Derby, a potential candidate for governor in 2022, said Tuesday she will not seek another House term this fall, guaranteeing new leadership in three of the four caucuses at the Connecticut General Assembly.

Klarides repeatedly declined to talk about ambitions for higher office in a video-conference call with reporters, but she pointedly said, “My time in public service is not over.”

Her announcement came on the same day when Klarides and the other three caucus leaders jointly announced what has been clear for weeks: The 2020 legislative session, suspended last month in deference to the COVID-19 precautions, is over. Its constitutional adjournment deadline was midnight on May 6.

“The 2020 regular legislative session will adjourn without any further action, and we are already working on a plan to convene a special session in the coming months to ensure the continuity of government functions and that any necessary legislative action can be taken,” the leaders said. “Our top priority is the health and safety of the public, and we are committed to continue working in unison to stem this health crisis and do everything possible to protect the Connecticut residents we all represent.”

Klarides, 54, has represented the 114th House District for 22 years, the last six as the leader of a GOP caucus that came achingly close to winning a majority in 2016, only to lose ground two years later to Democrats energized by the election of Donald J. Trump. She was the first woman to lead the caucus.

“You never know when the right time is,” Klarides said. “I didn’t have an epiphany.”

Klarides, who also is a lawyer in private practice, recently became engaged to Greg Butler, the executive vice president and general counsel of Eversource. But she said her marriage plans did not influence her decision not to seek another term. She joked that her wedding plans were uncertain, given the COVID-19 restrictions on social gatherings of more than five people.

“There’s different things I’m excited about in the future, but that won’t affect whether I run or I don’t run,” she said.

Deputy House Minority Leader Vincent J. Candelora, R-North Branford, a member of the conservative caucus and close ally of Klarides, said he was asking his colleagues to name him as her successor. It is unclear who will succeed Fasano, but House Majority Leader Matt Ritter, D-Hartford, is the consensus choice to succeed Aresimowicz.

Klarides weighed a run for governor in 2018, but opted instead to seek another term in hopes of leading the GOP to a House majority for the first time since the Ronald Reagan landslide of 1984.

Connecticut Republicans generally do not gain General Assembly seats in presidential election years, but 2016 was an exception: The GOP won an 18-18 tie in the state Senate and 72 seats in the House, just four short of a 76-75 majority. 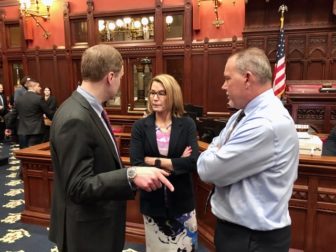 Klarides was a Trump delegate to the Republican National Convention in Cleveland, but his presidency has been a challenge for northeast Republicans.

“We have a president that is such a lightning rod,” Klarides said after her party’s legislative losses in 2018.

Like her predecessor as minority leader, Lawrence F. Cafero Jr., Klarides tried to steer her caucus away from the national culture-war issues of abortion, gun control and gay marriage and focus on a brand of fiscal responsibility.  Klarides is a fiscal and law-and-order conservative, but a supporter of abortion rights and gay marriage.

Klarides has not wavered from what she said after the 2018 losses: The Connecticut GOP was correct to focus on the state’s economy and budget.

Her predecessor, Cafero, had a similar reaction in 2008, when a landslide win by Barack Obama in Connecticut helped Democrats win super majorities in both chambers of the General Assembly: 114-37 in the House, and 24-12 in the Senate. Cafero blamed a weak national ticket and the national GOP’s reliance on “God, guns and gays” as wedge issues.

Klarides highlighted three things in her announcement Tuesday: Passage in 2017 of a bipartisan budget that did not raise taxes and included fiscal reforms; a ” longstanding commitment to women’s health issues,”  including expanded insurance coverage of breast care treatment and awareness; and support for victims’ rights.

She refused to cede women’s issues to the the Democrats. In 2018, she arrived uninvited to a Democratic press conference celebrating bipartisan passage of a pay-equity bill and another measure that overhauls Connecticut’s sexual harassment and assault laws.

“I thought we all stood together as women,” Klarides said, arriving with women from her caucus. “We all stand here in support of all women’s issues.” One of the Democrats apologized for failing to include them.

More recently, she took a hard line against Gov. Ned Lamont’s proposal to use highway tolls to stabilize the state’s special transportation fund, the issue that dominated the Democratic governor’s first year in office.