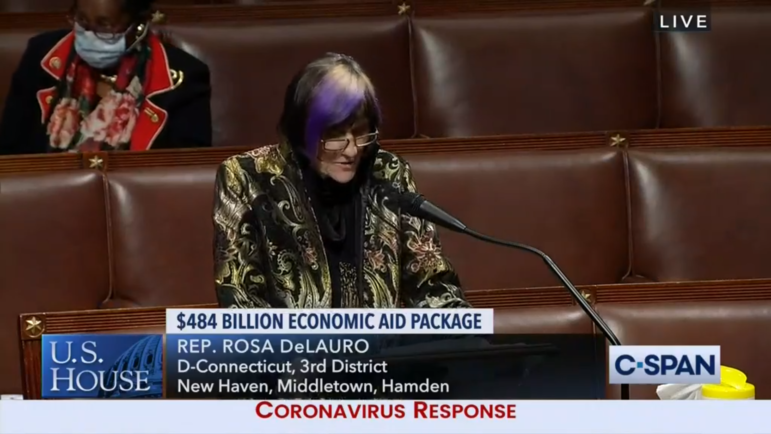 U.S. Rep. Rosa DeLauro during her remarks to the House on Thursday.

Following unanimous approved by the Senate on Tuesday, House members cast votes in groups divided alphabetically, approving the bill on a 388-5 tally.The bill now goes to President Donald Trump, who has signaled he will sign it into law.

While the bill had huge bipartisan support, there was plenty of partisan sniping during the debate on the package. Republicans accused Democrats of delaying the aid with their insistence there be money included for hospitals and  for coronavirus testing, as well as a $321 billion infusion for the Paycheck Protection Program, the small business loan fund that ran out of money last week.

Democrats, meanwhile, accused Republicans of wrongfully wanting to leave out $75 billion in emergency relief for hospitals and $25 billion to ramp up coronavirus testing.

But the biggest debate was over something that wasn’t in the package – more money for state and local governments.

“This is not everything we wanted,” said Rep. Rosa DeLauro, D-3rd District. “Next we need relief for states and localities.”

The last federal stimulus bill, the CARES Act, provided states with $150 billion to cover the direct costs of the pandemic. The nation’s governors, including Gov. Ned Lamont, say there needs to be $500 billion more and flexibility to be able to use that money to address all kinds of shortfalls in state budgets.

“The velocity of red ink is going to continue to escalate,” Rep. Joe Courtney, D-2nd District, said. “No on their right mind thinks [state] tax collections are going to rebound.”

Failing to win new funding in the bill approved by the House Thursday, the governors and congressional Democrats who support them hope to win new funding for states in the next coronavirus package. But Republicans  are sounding the alarm about taking on more debt to pass another stimulus package that could carry a price tag of more than $2 trillion.

Hewitt asked McConnell if states should be able to file for bankruptcy – something now prohibited  by law –instead of receiving additional federal aid, especially those with Democratic governors. Hewitt named  Illinois and Connecticut as examples of states that have had “giveaway” programs to public employment unions and have “given money away for years to people who aren’t working.”

“Yeah, I would certainly be in favor of allowing states to use the bankruptcy route. It saves some cities,” McConnell replied. “And there’s no good reason for it not to be available,” he continued. “My guess is their first choice would be for the federal government to borrow money from future generations to send it down to them now so they don’t have to do that. That’s not something I’m going to be in favor of.”

Courtney: “I honestly think McConnell’s position will be totally overwhelmed by forces that are hitting ‘red’ states as well as ‘blue’ states.” He also predicted Congress would soon consider  a new coronavirus package, perhaps in several weeks. Both the House and Senate are due to return May 4.

At that point, Courtney said he would press for increases in food stamps, more emergency money for farmers and possibly more money for the Paycheck Protection Program, which provides banks authorized by the Small Business Administration to grant loans to businesses with fewer than 500 employees. Those loans could be forgivable under certain conditions.

Sen. Chris Murphy, D-Conn., agreed there will be more legislation. “We’re not done yet.”

“Congress must come together to pass another major stimulus package to make sure state and local governments have what they need to survive this crisis, send critical relief to Americans who are struggling, and federalize the medical supply chain to get critical goods to places they’re needed most,” Murphy said.

Senate Minority Leader Chuck Schumer, D-N.Y., has been adamant that the latest rescue plan cannot be the last. “For anyone who thinks this is the last train out of the station, that is not even close to the case,” he said.

Dems seek oversight of how money is spent

There was also a partisan divide and a 282-187 vote Thursday on a House resolution that would establish a new oversight committee to monitor how the trillions of dollars Congress has approved to combat the pandemic is spent.

The panel will be chaired by House Majority Whip Rep. Jim Clyburn, D-S.C., a frequent Trump critic.  Republicans argued the panel would be used by Democrats, who are in the majority in the House, to attack the president in an election year.

Murphy, and Sen. Richard Blumenthal, D-Conn., are also seeking more oversight of some of the $3 trillion Congress has approved to respond to the coronavirus crisis.

On Thursday, the senators wrote to Treasury Secretary Steven Mnuchin and SBA administrator Jovita Carranza asking them for “real-time, comprehensive information about how funding from these programs is being distributed.”

“Businesses and non-profits across Connecticut that were unable to secure the loans or grants associated with these programs are desperately awaiting relief,” the senators wrote.

The Paycheck Protection Program, which has been funded by $350 billion in the CARES Act, is now slated to receive another $310 billion.

In the first two weeks of the program, banks approved billions of dollars in forgivable loans to businesses in areas of the country with relatively few COVID-19 cases, companies in industries that have not been the hardest hit by the shutdown, and companies that are not even small businesses.

The senators asked Mnuchin and Carranza for a detailed list of information, including the number and amount of loans distributed to small businesses, non-profits and religious institutions in Connecticut, separated by industry, yearly revenue, loan size, geographic location, and business size.  They also asked for information about the number of women and minority owned businesses that were approved for PPP loans.

“Throughout Connecticut, many small businesses are left questioning relief efforts. We can address their concerns by offering transparency and instilling confidence in these programs,” the senators wrote.