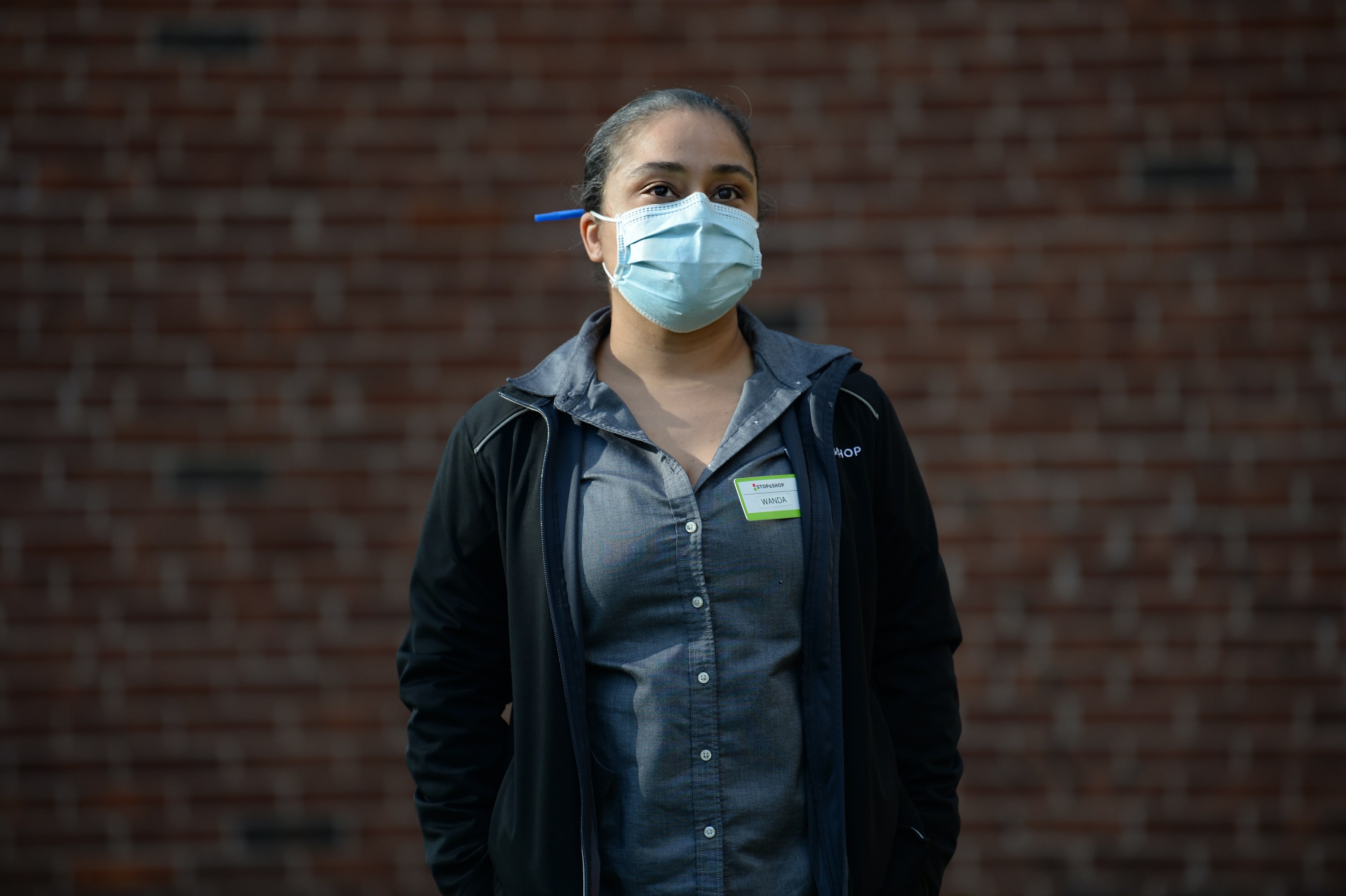 Wanda Valdez-Jablonecki works at a Stop & Shop in the Forestville section of Bristol. At the beginning of the pandemic, when the virus was spreading rapidly, she was working 12 to 13 hour shifts.

When Wanda Valdez-Jablonecki returns to her West Hartford home from her shift as a head cashier at the Forestville Stop & Shop in Bristol she follows a very exacting routine.

Valdez-Jablonecki, 41, takes off her shoes and sprays them with Lysol before she steps into the kitchen. Then she strips off her clothes, sprays the hospital mask she wore (one of four she owns) with disinfectant, placing the mask on a napkin to dry. She throws her gloves into a special trash can that is lined and has a lid, and uses disinfectant wipes to clean the license, credit card and Stop & Shop card she carried to work in the small wallet that has replaced her purse.

Then Valdez-Jablonecki wipes down her eye glasses and every single coin she may have acquired during the work day, putting them in a “clean coin” container. If she brought home groceries, she wipes them down, too. And no longer does Valdez-Jablonecki purchase fresh fruits, vegetables or meat that have been in the store’s refrigerated section for more than a day.

Finally, Valdez-Jablonecki leaves the kitchen to take a shower.

She’s adopted the routine because, like many of the state’s Latinos who are still employed in jobs that bring them in close contact with the public, Valdez-Jablonecki could pay a high price if she isn’t vigilant during the coronavirus pandemic. Latinos have much higher infection rates than non-Hispanic whites, both in Connecticut and across the nation.

“My husband says ‘You are so paranoid,’” Valdez-Jablonecki said. “But thank God, this routine has been working for me.”

Valdez-Jablonecki, who was born in Puerto Rico, is one of tens of thousands of Connecticut Latinos who are working essential “front-line” service jobs during the coronavirus pandemic, staffing supermarkets and pharmacies, cleaning or providing direct care at nursing homes and hospitals and working as bus drivers or, like Valdez-Jablonecki’s husband, security guards. 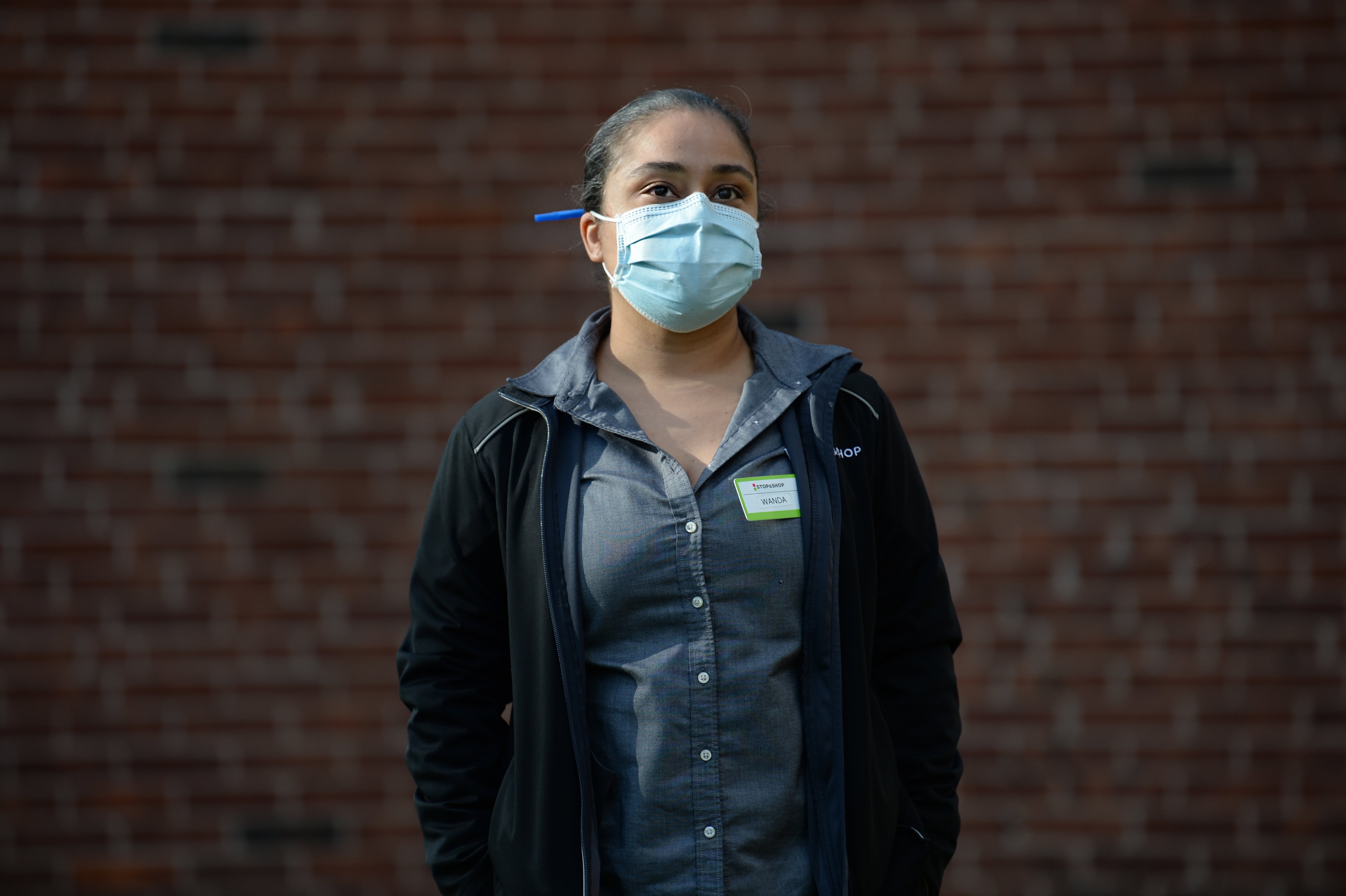 Jablonecki said she sometimes experienced panic attacks on her way home from work.

The U.S. Labor Department says that in 2018, there were about 251,000 Latinos employed in Connecticut, making up about 14% of the state’s labor force. Labor Department data also shows that the highest concentration of working Latinos in New England– about 32% — were employed in service jobs, the most of any racial or ethnic category.

In addition to high infection rates, there’s also early evidence Latinos are suffering from high levels of stress and psychiatric disorders, experts say. The contact with the public required by service jobs, as well as other factors like crowded living conditions and concerns about the health of themselves and their families, has resulted in anxiety and stress for this group.

My husband says ‘You are so paranoid.’ But thank God, this routine has been working for me.”

Valdez-Jablonecki, who is asthmatic and considered high risk for the virus, said she was more stressed at the beginning of the pandemic, when she was working at a Stop & Shop in New Britain and dealing with “panicky” shoppers who were upset the store was out of toilet paper, rubbing alcohol, hand sanitizers and other goods made scarce by the pandemic.

Of her customers: “It was all about them, not about us,” she said.

Valdez-Jablonecki, who has worked for the Stop & Shop company for 23 years, said she took a week off from work and “was able to watch the news,” which helped her put things in perspective.

“I’m more calmed down,” Valdez-Jablonecki said, especially since Stop & Shop has implemented new safety policies and provided its workers with masks and gloves.

She said she appreciates customers who thank the cashiers for their service. “It motivates us,” she said.

But she knows there are still those who don’t consider their safety, including those who refuse to wear masks to shop in the store.

Margarita Alegria, a psychiatry professor at Harvard Medical School, said there has always been a disparity in the health outcomes of the nation’s Hispanics during pandemics, citing their greater death and infection rate during the 1918-19 waves of Spanish flu, which killed at least 675,000 in the United States.

New York, and other states, have released data showing Latinos are not only being infected with coronavirus at higher rates than non-Hispanic whites, they are dying of COVID-19 at higher rates, too.

But the Connecticut Department of Public Health has released data showing that the state’s Latinos are dying here at lower rates than non-Hispanic whites and African-Americans, who have the highest death rate. 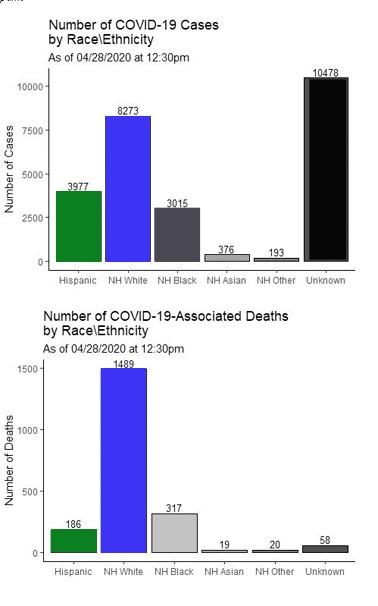 Connecticut Health Department data on the racial and ethnic breakdown of corona virus infections and deaths. The department acknowledges that its data “may be missing.”

DPH spokesman Av Harris said the anomaly in the data may be a result of the Latino community’s younger, healthier population — or the result of a lack of information. The state has race and ethnicity information for only about half of those they know have been infected and/or have died.

“We don’t have a complete picture,” Harris said.

Alegria said more Latinos are becoming infected with coronavirus because they don’t often have the option of working from home or the luxury of quitting a job they fear is putting them in harm’s way. “Their jobs are the only jobs available and they need them to support their families,” she said.

Valdez-Jablonecki said she has come to terms with the risks she takes working six days a week at Stop & Shop. “But I would much rather be home,” she added. 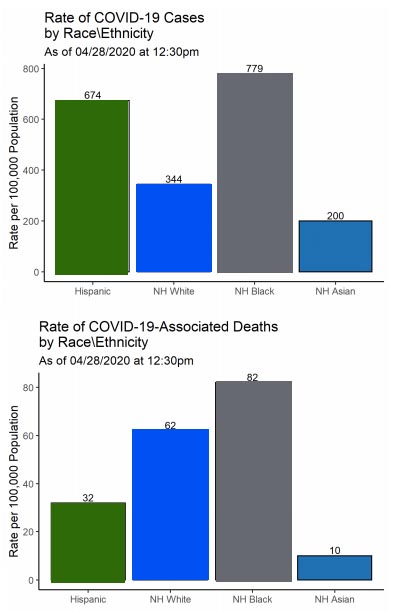 There may be mental health disparities when it comes to the Latino population, too.

Alegria said surveys of the nation’s Latinos show that about 20% reported their mental health has been negatively affected by the pandemic and about 35% say they are depressed.

“Psychological stress tends to be higher in low-income people,” she said. “And we’re hearing the anxiety is growing.”

Carlos Rivera, director of behavioral health services at the Hispanic Health Council, runs an out-patient clinic that serves about 200 of the state’s very low-income Latinos for free or on a sliding fee scale in the greater New Haven area.

He said his clients, who tend to only speak Spanish, are anxious about the pandemic for several reasons, including the concern they aren’t receiving enough information about the coronavirus emergency.

Psychological stress tends to be higher in low-income people. And we’re hearing the anxiety is growing.”

Rivera said the acuity and level of distress felt by his patients has grown. Other, higher income Latinos have been affected, too. “Our population is utterly stressed out,” he said.

Still, many Latinos in the state aren’t seeking help because of a cultural stigma against mental illness, Rivera said, or because they are uninsured or worried that using government-run mental health services would make them “public charges” and, under new immigration rules, hurt their chances for a green card or citizenship.

The pandemic has also upended the traditionally strong Latino family structure with forced separations and the inability to visit a relative who is sick – or even obtain information about hospitalized relatives.

Valdez-Jablonecki, one of 12 children, said she is closest to her eldest sister and a brother, who is ill with cancer.

She liked to “hang out” with her older sister whenever she could and spend time on Sunday with her brother.