School’s out for summer, by governor order. Remote learning continues.

Gov. Ned Lamont will order K-12 schools throughout Connecticut to stay closed for the remainder of the academic year because of the health threat posed by COVID-19.

In making this decision, Lamont becomes the 40th governor in the nation to decide that it is not safe for school buildings to reopen.

“I know how important it is for so many students and teachers to finish out the school year, and I was holding out hope – particularly for high school seniors – that we’d at least be able to complete the final few weeks, but given the current circumstances and to protect everyone’s safety, it has become clear that it’s just not possible,” Lamont said Tuesday morning.

No decision has been made yet about whether summer school will be allowed to convene. The governor plans to make a decision on that towards the end of the month. Summer camps will be able to open in early July.

Remote learning is expected to continue though the scheduled school year.

“The difficult decision to cancel classes for the remainder of the year is based on the health and safety of our students, their families, and our Connecticut communities,” Education Commissioner Miguel Cardona said. “While technology and remote learning will never replace the experience of our students in their school community, we are committed to constantly improving access to high-quality materials and connectivity for our students.”

This announcement – recommended by the panel the governor appointed to explore how best to reopen schools and businesses –  is sure to complicate efforts to restart the economy since many employees rely on schools for childcare while they work.

The Democratic governor first ordered schools closed seven weeks ago after most district leaders had already decided to close their doors. When it became apparent that it was not safe to reconvene schools, the governor in early April extended his school closure order through May 20.

While 16 other states had already ordered schools closed for the academic year at the time Lamont extended the closure, he still received pushback from some in the legislature and business community for making an early decision to keep commerce and schools shuttered.

Delaying a decision to close for the remainder of the year was an effort to keep parents, students and educators engaged in learning. Officials feared that cancelling school for the whole year would lead to students becoming disengaged until a new school year begins in late August. 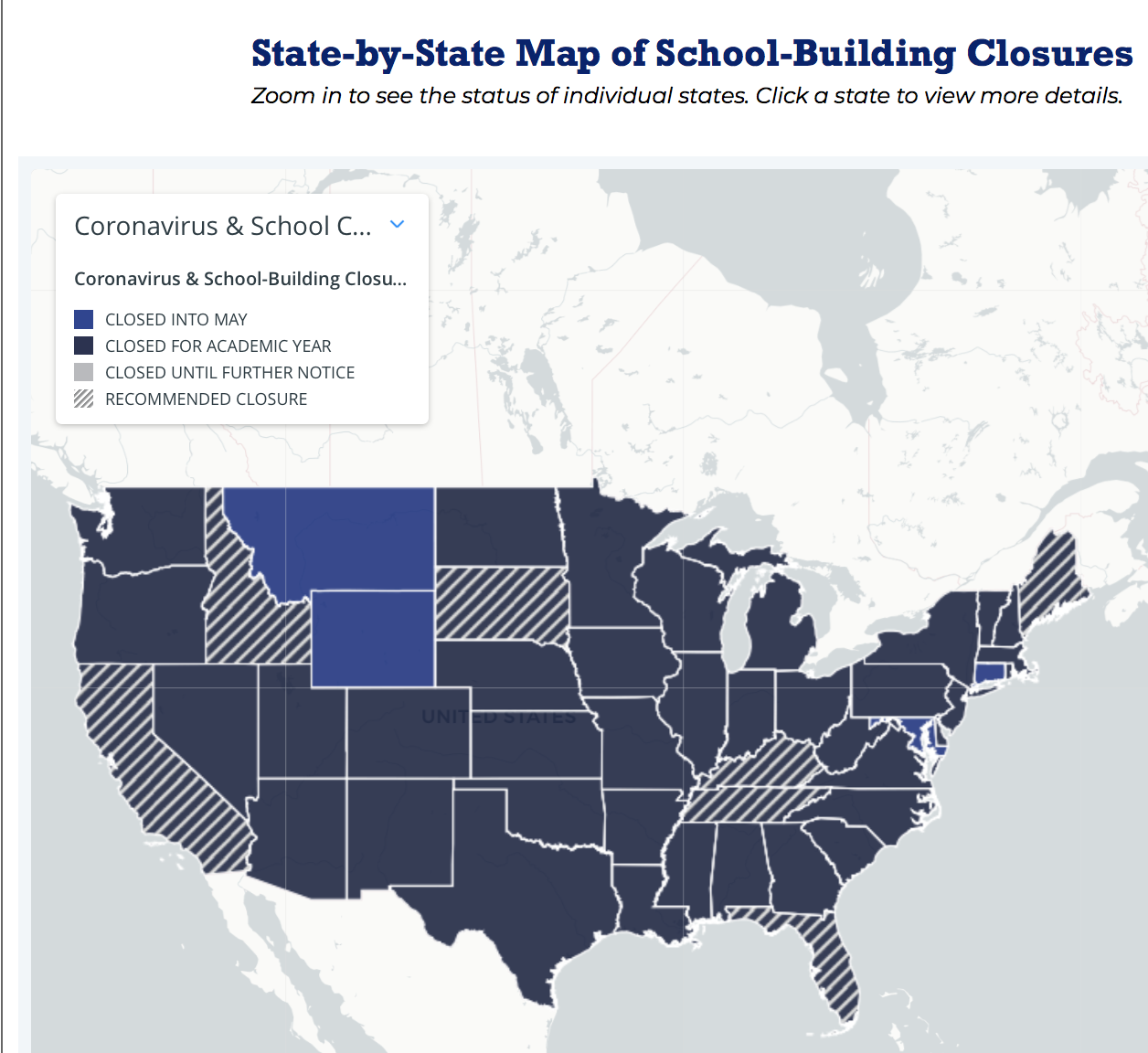 Click on image to get more details from Education Week on school closures in other states.

However, the governor has signaled on multiple occasions that school would likely be closed for the remainder of the year. If Lamont had allowed schools to reopen, students would have come back for just three or four weeks before summer break began.

To date, the leaders of 40 states have ordered their schools to stay closed for the remainder of the school year and seven have recommended that local district leaders keep schools closed, reports Education Week, a national news outlet that is tracking school closures. Among the states in New England, Connecticut and Maine are the only states that have not ordered schools closed for the rest of the school year, though Maine’s governor has recommended that local districts stay closed. States where decisions have yet to be made include Maryland, Montana, New Jersey and Wyoming.