School has been closed for 295k children in Connecticut. What now?

School has been cancelled for at least 295,000 students in Connecticut as the fear of coronavirus spreads. To put that in perspective, that’s just over half of all the public school students in the state.

The domino of school districts announcing they intend to close – some for two weeks and others indefinitely – followed news Thursday that the number of Connecticut residents who have tested positive for having COVID-19 rose to 5 people.

Here’s what that means …

Students may not have to make up the missed days

State law requires that school districts open their door for 180 days and provide 900 hours of instruction, unless a municipality applies for and wins a waiver.

Gov. Ned Lamont overrode that process by signing an executive order so that towns that shutter their schools in reaction to the looming COVID-19 threat will not need to worry about meeting this requirement.

Lamont said this sends the message to superintendents that, “I want to take out all ambiguity. … We’re going to waive the 180-day requirement so that you have the flexibility you need to make the public health decision in the best interest of your communities.”

If schools are going to fall short of opening for 180-days, they must make up the missed days by adding additional days to the end of the scheduled school year. Schools that open through June 30 and still do not reach the 180-days will be able to close for the summer and not have to worry about the 180-day requirement.

Your school hasn’t closed yet?

The governors in Ohio and Maryland have closed schools statewide.

Connecticut’s governor is not ready to take that drastic step — not yet, anyway. 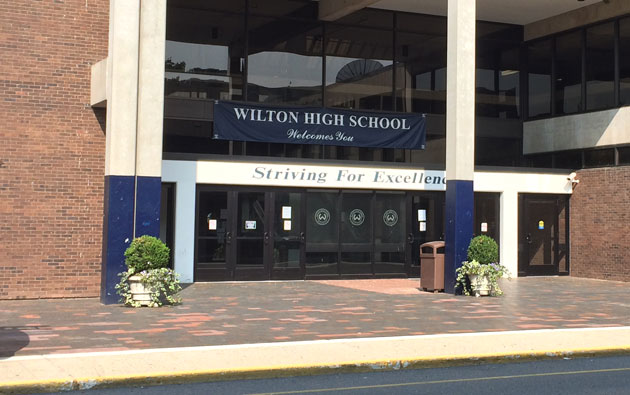 The students who attend Wilton High School have been sent home due to fears about the spread of the coronavirus.

“We haven’t had to. We’ve worked in a real collaboration with all the local superintendents discussing what we recommended, in terms of what we thought was going on, and they either followed our lead or took the lead themselves because they know how important their public health is and what a contagion could be like in an environment like the school,” Lamont told reporters during a briefing Thursday.

An analysis by the CT Mirror of all public schools Thursday evening show that districts that collectively enroll 295,361 students have announced they will close.

Some students will still be fed outside of school

Each day schools across the state feeds lunch to nearly 200,000 children from low-income families. Many also feed breakfast and dinner, too.

With large swaths of students staying home, many districts have planned alternative ways to get food to these children by setting up locations to eat or pickup food. For example, Hartford has five locations for children to visit and Bridgeport will keep 15 schools open for meals.

Many districts will not be on the hook for picking up these costs. That’s because federal rules allow states to seek a waiver during unexpected closures that allows them to use funding they would have otherwise had for school meals to find alternative ways to feed students.

Connecticut has applied for a waiver, and the federal government has announced it plans to approve all the applications. But not all communities will benefit from this, reports Civil Eats, a news site that writes about food policy. Federal rules only allow meal service at “area eligible” sites — that is, locations serving populations with at least 50% of the children entitled to free or reduced-price lunch.

Need to go to work still? The state is working on a solution.

Nationwide, about 60% of  the workforce are hourly employees and many don’t get time off when their kids are sent home when school closes.

The parents of many of these students also work at the hospitals and other health facilities that need these parents to show up — especially during a pandemic.

The administration is in the process of setting up as many as 26 child care facilities for the children of the health care staff working at the state’s hospitals. These centers, for children ranging from infant to school age, are not expected to cost more than $2 million to operate over two months.

Beth Bye, the commissioner of the Office of Early Childhood, said United Way’s 2-1-1 is also reaching out to every provider to figure out their capacity to enroll  more children in the short-term. Her office is also considering relaxing staffing-level requirements so that existing facilities can immediately take in more children.

Businesses are also being encouraged to consider opening on-site day care centers, and the state will consider waiving licensing requirements.

Correction: Due to inaccurate information released by the Lamont Administration Thursday night, this article incorrectly reported that school districts will not have to make up missed days at the end of the school year. If schools are going to fall short of opening for 180-days, they must make up the missed days by adding additional days to the end of the scheduled school year. Schools that open through June 30 and still do not reach the 180-days will be able to close for the summer and not have to worry about the 180-day requirement.