COVID-19 reopening relies on a safety net still being woven 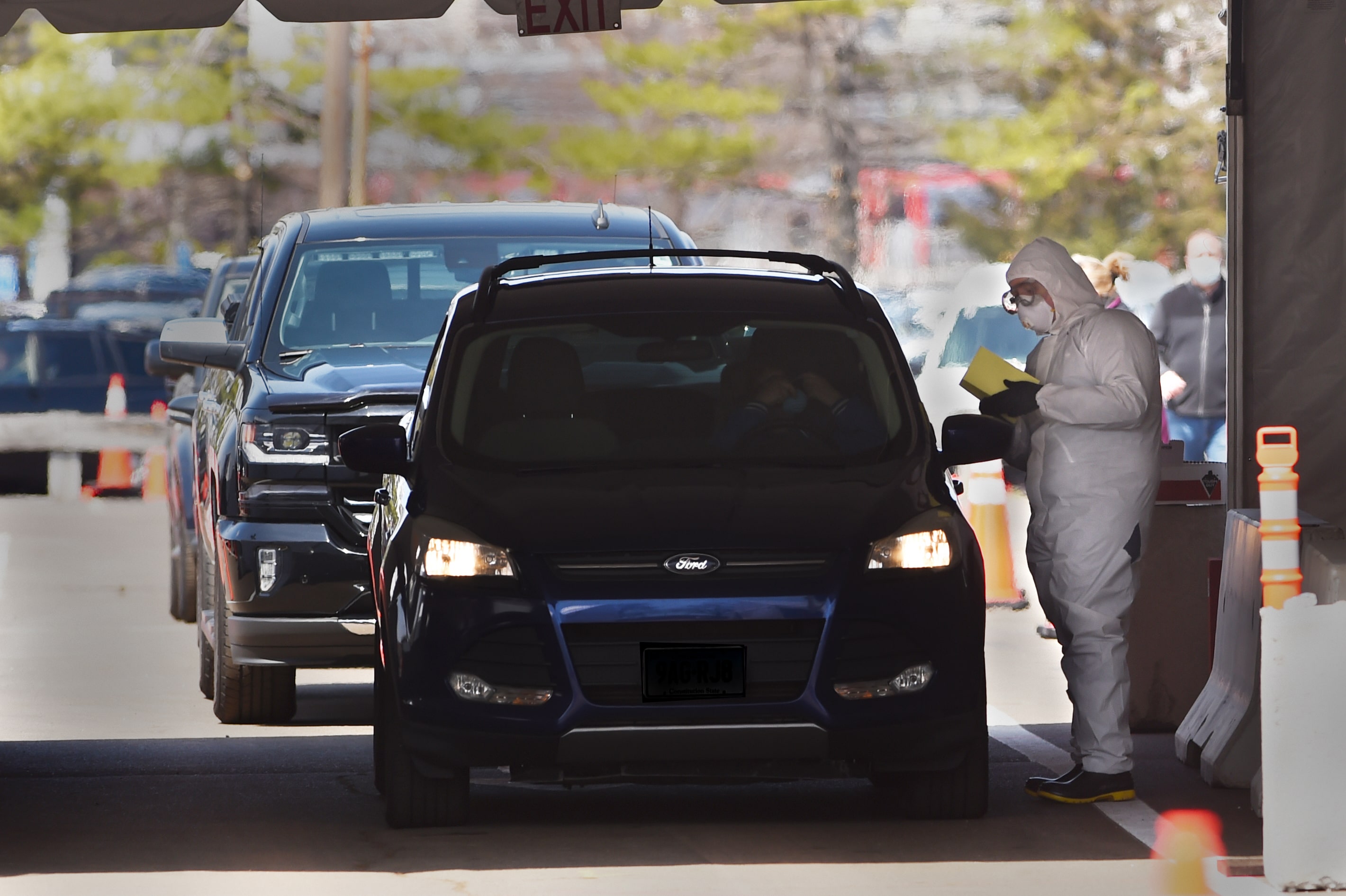 A health care worker prepares to take a sample in New Haven at the state’s first rapid COVID-19 testing center. The site, run by CVS Health, provides results within 30 minutes using a test made by Abbott Laboratories.

Connecticut’s nascent plan to prevent a resurgence of COVID-19 by aggressively tracking new cases relies in large measure on local health districts that long have been underfunded – and a testing capacity that does not yet exist.

Both are foundational elements of the plan to guard against new outbreaks as Gov. Ned Lamont prepares to begin easing the restrictions on commercial and social life he ordered in March to slow the spread of the novel coronavirus.

“If public health does our job right, nothing happens. If nothing happens, it’s not news. But let me tell you, it takes a hell of an effort to make nothing happen,” said Charles K. Brown Jr., the director of the Central Connecticut Health District.

To make nothing happen in the context of containing a contagion, the National Association of County and City Health Officials says 15 disease detectives, or contact tracers, are typically needed to protect a population of 100,000; the need doubles to 30 during a pandemic.

With a population of 3.5 million, Connecticut would need about 500 disease detectives to meet the lower standard and 1,000 to meet the higher one. That’s more than three times what’s now available.

The state Department of Public Health has 30 people trained and available for contract tracing, and the department estimates another 270 are available at 65 municipal and regional health departments, said Kristen Soto, the epidemiologist who oversees syndromic surveillance for DPH.

The state is also working with schools of medicine, nursing, public health and social work to recruit and prepare a network of volunteer contact tracers by May 20, when Lamont hopes to begin easing the COVID-19 restrictions. Soto said the state’s goal is to have about 800 trackers available at any one time through staff and volunteers.

“So far, the team is very happy with the number of volunteers being identified,” said Josh Geballe, the state’s chief operating officer. “As we go live, if we think we’re not covering all the contacts that need to be traced, we’ll re-evaluate and look to bring in additional staff or potentially additional volunteers.”

Software to help the trackers is being shared by the state with local health departments for training and testing beginning this week. Soto said technology will give trackers the option of questioning subjects via text or online surveys, then share the data in a common database so the contagion can be tracked across different jurisdictions.

Calling on health departments after a decade of cutbacks

Across the nation, it’s been a difficult decade for local public health agencies. The national association estimates the loss of 50,000 local positions, or nearly 25% of the workforce, since the Great Recession of 2008.

Connecticut has 20 regional health districts that cover 116 of the state’s 169 cities and towns. Thirty-three municipalities have full-time health departments. Together they cover about 95% of the population. The remaining 5% are served by part-time health directors.

Jeffrey Catlett, the president of the Connecticut Association of Directors of Health, said the local health agencies are bruised by years of the state failing to meet a statutory funding contribution to local health departments.

The state promises $1.85 per capita in public health funding to every community of more than 50,000 people or to regional health districts with at least three communities. With funding cuts, the actual per-capita payment in the current fiscal year was $1.18, according to the state association.

We haven’t had a hearty discussion on how we do it or who will do it. That is the biggest disconnect we have seen.”— Jeffrey Catlett, president of the Connecticut Association of Directors of Health

Catlett, who is the health director in Manchester, said no municipal or regional district is represented in the group advising Lamont on reopening Connecticut. But it is the local officials who are getting questions from businesses about what reopening might look like. He’s already heard from a hair salon wanting to know about booking clients for 8 a.m. on May 21.

“We’ve seen brief snippets of the software,” Catlett said. “We haven’t had a hearty discussion on how we do it or who will do it. That is the biggest disconnect we have seen.”

It was the state’s oldest regional health agency, the Weston Westport Health District, created in 1966, that tracked the initial coronavirus hotspot in Connecticut. The sentinel event was a 40th birthday party in Westport on March 5.

One of the guests was a man from South Africa who fell ill on the flight home to Johannesburg. On March 11, the local health director, Mark A.R. Cooper, was informed the man had tested positive for COVID-19.

Cooper and his staff started making calls, using a guest list provided by the host. Schools were closed the next day. But the virus had a six-day head start.

We moved from containment to mitigation. It’s here. How do we limit the damage?””— Mark A.R. Cooper, Westport Weston Health District

March 11 was a Wednesday. The town arranged drive-through testing the next day for 38 party guests. By Saturday, about half had tested positive, and Cooper knew from their contacts there would be more.

“We went from a strategy of trying to contain it. We realized it’s beyond containment. The horse is out of the barn,” Cooper said. “We we moved from containment to mitigation. It’s here. How do we limit the damage?”

By March 16, Westport had 85 laboratory-confirmed cases.

But Westport had advantages. It is small and close-knit, with about 28,000 residents, and its health district was doing COVID-19 outreach before anyone knew the virus had arrived. 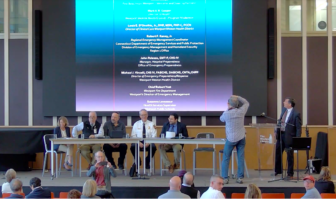 Westport had an informational forum on COVID-19 on March 8. They didn’t know the disease was already there and spreading.

On Sunday, March 8, Cooper had conducted an informational forum at the town’s gleaming new library that drew more than 100 in person and was viewed by 3,000 on-line. At the time, no Connecticut resident was known to be infected, but two New Yorkers who work in Fairfield County hospitals had tested positive in the previous two days.

“The reality of this virus is coming closer,” First Selectman Jim Marpe told the forum audience.

Little did he know.

“We didn’t realize it was going to be here in 2½ days from that Sunday,” Cooper said. “We were being proactive. The community was paying attention, so they knew what to do.”

On March 23, just 18 days after the birthday party, Westport had 62 cases. This was one fifth of 327 confirmed infections in all of Connecticut on that date. They soon would double, then triple.

But with the schools closed and social distancing observed, the spread was slowed, though not stopped. From April 10 through the 20th, Westport cases increased by 10%, from 165 to 197.

Over that same period, the numbers roughly doubled in the region’s cities, to 2,046 in Stamford and 1,356 in Bridgeport, both cities with populations of more than 130,000.

Westport’s tally of 255 on Tuesday was unchanged from Monday. It represents less than 1% of the state’s 30,621 cases. If Westport offers something of a success story in how to mitigate a contagion, its experience also illustrates the challenge and limits of contact tracing.

“Our initial 40 went to hundreds, then went to many hundreds,” said Cooper, who has a staff of nine. “There was no way to contact them all.”

The numbers are daunting

With some exceptions, contact tracing became futile once the cases multiplied in the state, doubling every three to five days. Even now, as the trajectory of new cases bends downward, the numbers are daunting. On Tuesday, the state Department of Public Health reported 648 new cases.

The hope is that the numbers of new cases will be more manageable by May 20, and the new system of tracking and testing will be ready to identify and mitigate any new outbreak.

“It’s definitely going to be a challenge to do this, but I think it’s the right challenge we have to take on at the local level,” said Brown, the director of the Central Connecticut Health District. It covers four suburbs south of Hartford: Berlin, Newington, Rocky Hill and Wethersfield.

The district has a population just under 100,000, meaning he needs about 30 disease detectives. Including administrative help, Browns’s entire staff is 11 people.

The four towns had 46 newly reported positive cases of COVID-19 in the first five days of May, bringing the district’s total to 755 over seven weeks. A daily average of nine new cases doesn’t sound like a lot, but if one of them is a grocery cashier who took a bus to work, they may come into contact with dozens of other people.

By May 20, Brown’s district will be expected to quickly contact anyone newly tested as positive, identify their recent contacts and try to reach them to urge isolation. He most likely will recruit some of the retired nurses who volunteer every year during flu season to help with vaccinations.

Fear of what comes next

Brown said he is nervous about the challenge that will come with the gradual relaxation of stay-at-home orders, given that the novel coronavirus is highly contagious, transmissible when the carrier is asymptomatic, and cannot yet be prevented with a vaccine.

“This is a pathogen where we have to fall back to the basics. That is the isolation. That is the hand washing and things like that,” Brown said. “Those aren’t the best tools in our tool box, but they are the only tools we’ve got right now. And it scares me as a public health professional as we pull back from things we know now are saving people’s lives.”

On May 20, it will get more difficult.