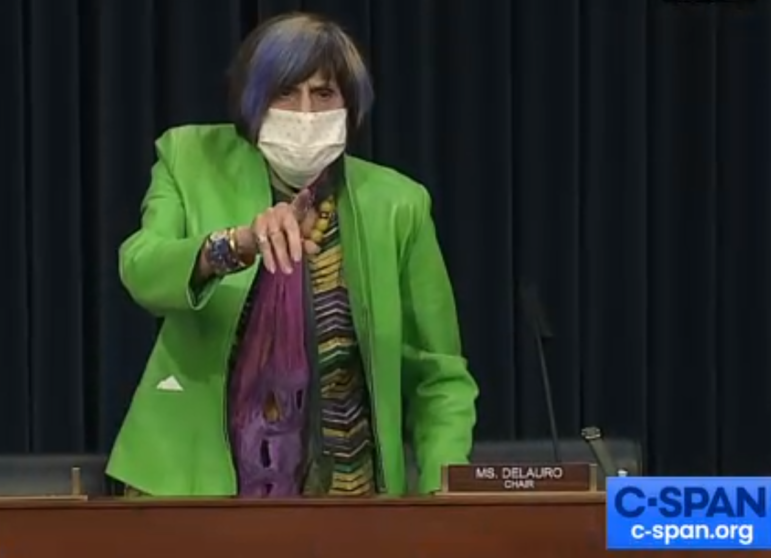 Washington – Rep. Rosa DeLauro wanted answers Wednesday to questions on the federal government’s response to the coronavirus pandemic, but the Democrat was not able to secure the testimony of her would-be star witness, Dr. Anthony Fauci.

The White House barred Fauci from appearing before DeLauro’s appropriations subcommittee hearing Wednesday, but will allow the nation’s top epidemiologist to appear next week before the Senate Health, Education, Labor and Pensions Committee, which, unlike DeLauro’s panel, is run by Republicans.

President Donald Trump on Tuesday indicated politics drove the decision to hold Fauci back,  claiming DeLauro’s  hearing was “a setup.”

“The House is a bunch of Trump haters,” Trump said. “They put every Trump hater on the committee.”

In her opening remarks Wednesday, DeLauro bristled. “Dr. Fauci has appeared before our subcommittee dozens of times,” she said. “He has testified whether it was a Democrat or Republican as chair… Now the White House said no, leaving no doubt it is just frightened of oversight.”

“I am angry that the White House has mismanaged response to the pandemic,” DeLauro also said.

The top Republican on the subcommittee, Rep. Tom Cole of Oklahoma, also criticized the ban.  “I want the record to show I joined the chairman in urging that Dr. Fauci be allowed to testify here,” he said.

In the absence of Fauci’s testimony, former Centers for Disease Control and Prevention Director  Dr. Tom Frieden and Caitlin Rivers, a senior scholar at Johns Hopkins Center for Health Security, were invited to testify instead.

They said states should not reopen, especially those like Connecticut who are hardest hit by the coronavirus, without much more testing and contact tracing – the ability to reach and test those who have had close contact with infected individuals.

“Our war against COVID will be long and difficult,” Frieden warned. “We are just at the beginning of the pandemic.”

Frieden, now President of Resolve to Save Lives, a global health initiative, said the pandemic has ushered in “a new normal” that will require Americans to forever incorporate hand sanitizer, masks and “no touch” doors into their  daily lives. 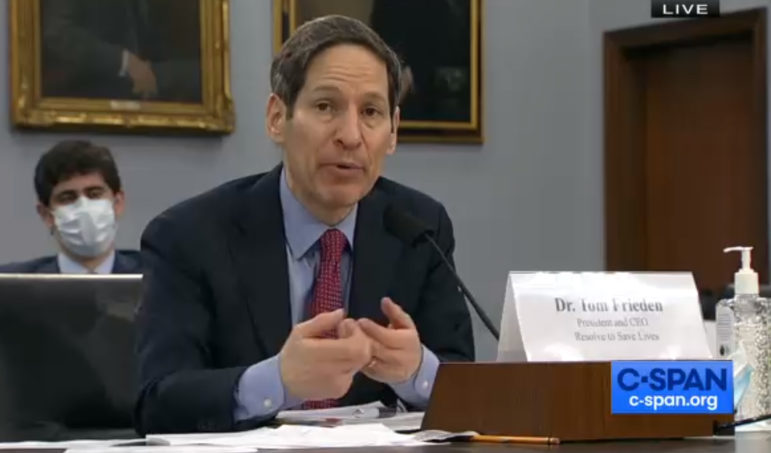 Former CDC Director Tom Frieden warns nation is \’just at the beginning\’ of the coronavirus pandemic.

Much like the nation, Congress is experimenting with new ways to return to business.

DeLauro’s hearing was held in a cavernous room that had been stripped of most tables and chairs, the few attendants wearing facemasks. Everyone was careful to sit or stand at least six feet apart from one another.

With the U.S. House out of session this week, DeLauro said she was disappointed that most committee members could not attend the hearing, as fellow lawmakers faced challenges in traveling back to Washington D.C.  She  urged House leaders to “move into the 20th Century…and allow virtual hearings.”

DeLauro, and several other lawmakers who did attend the unusual hearing pressed witnesses on how the nation could end coronavirus restrictions safely – and when.

Frieden said the issue of reopening the nation should not be compared to an “on and off switch” that ends all protections and restrictions imposed by state and local governments all at once, but to a “dimmer switch,” that allows a gradual easing of  shutdowns and removal of restrictions.

Rivers said no state should consider reopening until there’s a decline in new cases for at least two weeks, a huge increase in testing capacity, enough treatment capacity, and widespread contract tracing ability.

“To my knowledge, no state meets all four criteria,” Rivers said.

DeLauro was frustrated that the witnesses declined to directly answer a question — “should the country be reopening now?” — or say whether the federal government should take more of a lead in battling the pandemic.

“We cannot say ‘on one hand this and the other hand that,’” DeLauro told the witnesses. “We need truth and facts.” 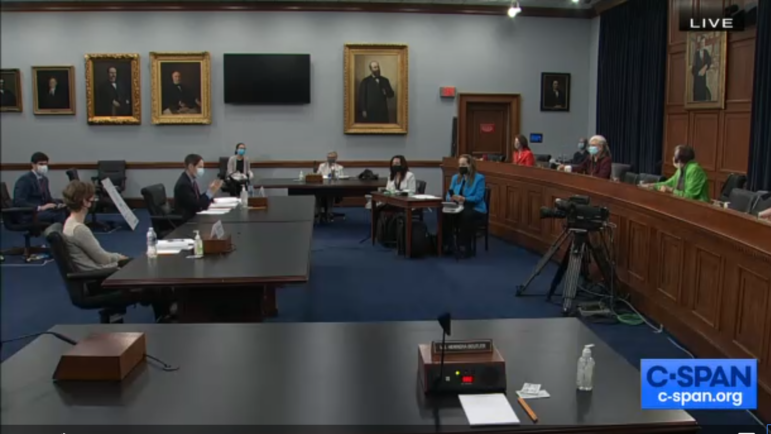 Meanwhile, Rep. Andy Harris, the only Republican in the Maryland congressional delegation and an anesthesiologist, said his constituents are chafing at his state’s stay-at-home restrictions.

He said small businesses in his largely rural district on Maryland’s Eastern Shore “can’t last”’ until the state reaches the levels of testing and contact tracing recommended for reopening.

Harris also said an increase in testing is likely to “turn up more infections” and push back another condition for reopening – a steady decrease in new cases.

Rivers told Harris that opening businesses to early would be counterproductive.

“I think customers won’t want to visit if they aren’t confident,” she said.

“That’s their choice,” Harris shot back.

The GOP lawmakers also said Americans must accept “some element of risk.”

“You are safer, far safer, if you are not born,” Harris said.

There are frequent comparisons between the 1918 Spanish Flu epidemic and today’s coronavirus pandemic, a comparison that DeLauro said hits home.

“My grandfather died of Spanish influenza,” she said. “Leaving a widow, five kids and another on the way.”