DeLauro takes HHS to task over the rollout of remdesivir 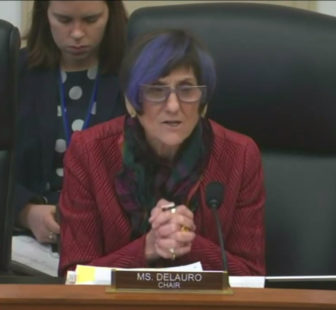 Rep. Rosa DeLauro is pressing the Department of Health and Human Services for the formula they used to distribute scarce vials of remdesivir.

Washington – Rep. Rosa DeLauro has asked the Food and Drug Administration to explain its clumsy rollout of remdesivir, the only drug that has shown any effectiveness in curbing the onslaught of the coronavirus. She wants to know why some states are receiving the drug and others are not.

“HHS distribution of remdesivir seems akin to winning the lottery —a random stroke of luck rather than a medically informed decision,” the lawmakers wrote.

Produced by  Gilead Sciences, Inc., to treat Ebola,  with disappointing results, remdesivir was in the midst of clinical trials to treat COVID-19 when the Food and Drug Administration decided it showed enough promise to be used as an emergency treatment to fight the coronavirus.

Gilead has donated a supply of the drug for those purposes and AmerisourceBergen was initially contracted to distribute the drug. But after reports that the first distribution of the drug ignored many coronavirus “hot spots,” including Connecticut, the Department of Health and Human Services announced it would handle remdesivir’s distribution.

Connecticut was included in the second round of the drug’s distribution this weekend.The state received a limited amount of remdesivir – just 30 cases, each containing 40 vials of the drug – and gave those vials to a number of hospitals.

They included the University of Connecticut’s John Dempsey Hospital, which said it received 32 vials and expects to treat three to five patients with it. Hartford Healthcare said it had received 280 vials for use in all of its hospitals and Trinity Health Of New England  said it received 160 vials.

Remdesivir does not cure COVID-19, but has been found to shorten the average duration of infection, from 14 to 11 days. The FDA set guidelines allowing remdesivir to be given to patients with  blood oxygen levels of 94% or lower, or otherwise requiring supplemental oxygen.

DeLauro said many doctors are waiting for more guidance before treating their patients with the intravenous drug, including the results of clinical trials conducted so far.

“Remdesivir is not a silver bullet or a cure to those who have fallen ill from COVID-19, but many people who are currently sick could have a quicker recovery if prescribed the drug according to our nation’s top health experts,” DeLauro said  “Given the treatment’s current scarcity, HHS needs to step up immediately to ensure further distributions occur fairly, and that the medial professionals who are in the position of prescribing it have the clinical trial data they need to make sound medical decisions. Time is of the essence—people’s lives are on the line.”

In their letter to Azar, DeLauro and Doggettt said that of the 1.5 million vials of remdesivir available today, the United States will receive only 607,000 vials. They asked why.

They asked Azar to divulge the formula HHS used to determine which states would receive remdesivir and how many doses each state would receive. The lawmakers also asked for the  delivery schedule for these doses and for all  the guidance provided the states to help them allocate available doses to their hospitals.

The lawmakers also asked about any agreements the U.S. government has already entered into with Gilead for future supplies of remdesivir and the terms of those agreements, “including amount, price, and timeline.”

HHS did not have an immediate response to the lawmakers’ letter.