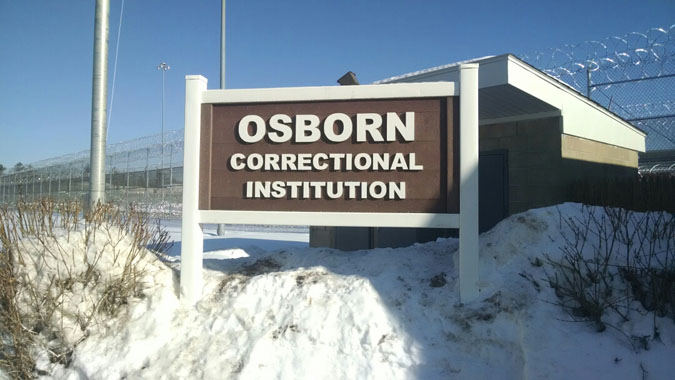 The DOC started testing all inmates, beginning with Osborn, on Wednesday. After testing 617 people at the prison in two days — almost as many who were tested from March 1 to May 14 across the entire correctional system — more than 100 tested positive for the virus. Results are still pending for 278 people.

“We are grateful to see the availability for mass testing become a reality. By testing everybody – staff as well as offenders, we are better able to protect everybody, those who are infected and those who are not.” said Commissioner Rollin Cook.  “The hope is that no one who tests positive becomes symptomatic, but if they do we are prepared to care for them.”

The DOC said “a portion” of inmates who opted out of being tested are being treated as asymptomatic carriers of the virus, “out of an abundance of caution.” They will be isolated for 14 days.

About 1,060 people are currently under lockdown at the Somers prison.

The Connecticut Prisoner Advocacy Network expressed concern for those held at Osborn. In an email, the group said inmates are unable to use their phones and aren’t allowed to shower.

“Given the crisis the world is facing, I’m sure we all understand the importance for loved ones to stay connected during these times and even more important for the inmates to know that their families are safe, and have the mental and emotional support they need to make it through this pandemic,” the group wrote in an email. “It is also critical for us to simply know that they are healthy and safe as well.”

Anyone who tests positive for the virus will be sent to Northern Correctional Institution. A memo Cook sent to all staff on May 12 says the agency is mulling over changing that policy and keeping COVID-positive inmates at Osborn.

“Ultimately, the number of offenders who do test positive for the virus will determine which operation plan is implemented,” Cook said in the memo.

Mass testing for all DOC staff also began Wednesday. More than 160 employees have been tested. The results are still pending.

Roughly 300 of the 369 staffers who tested positive for the virus before mass testing began have returned to work. More than 430 inmates have recovered from COVID-19.