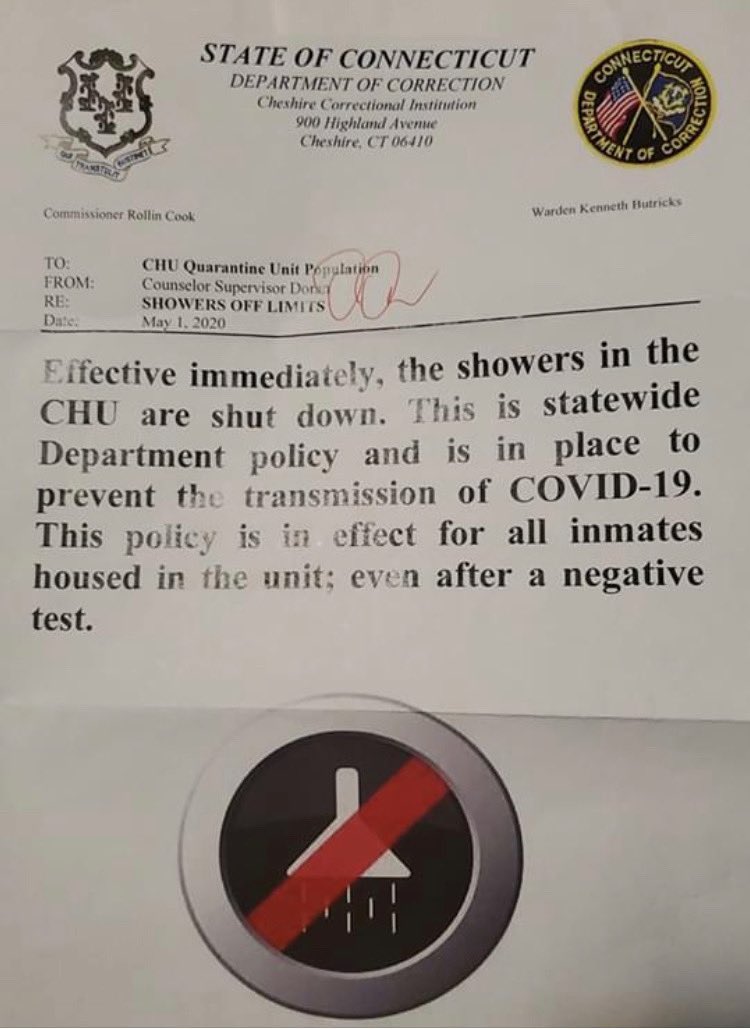 A Department of Correction memo alerting inmates in a prison’s quarantine unit that showering has been suspended.

Inmates held in medical isolation or quarantine units in any of Connecticut’s 14 prisons or jails are temporarily prohibited from using their correctional facility’s showers.

A memo issued on May 1 from a Department of Correction official states that showers in a Cheshire Correctional Institution housing unit are shut down until further notice. The note says, “This is a statewide department policy and is in place to prevent the transmission of COVID-19,” and it applies to all who are housed in that unit, even after they have tested negative for the virus.

Karen Martucci, the department’s director of external affairs, confirmed the policy in an email. She said the Centers for Disease Control and Prevention’s recommendations have guided the department’s policies since the onset of the pandemic.

“CDC guidelines speak to the increased risk for pathogen exposure and infection through aerosols. Knowing that showers, both hot and cold, produce aerosols and droplets, our current policy substitutes showers for in-cell washing with a basin and appropriate hygiene supplies for the quarantine and isolation units only,” said Martucci. “Based on the unique challenges the congregate prison environment presents, including an infrastructure where showers and sleeping quarters are in the same room, we have acted with an abundance of caution when creating internal policy.”

The no-shower policy was already known for Northern Correctional Institution, where many COVID-19-positive inmates have been transferred since early April. An orientation notice says that those who are held in Northern’s COVID units are not allowed to shower or have recreation time outside their cell. The sick are given hygiene products and a towel.

The May 1 memo extends that policy to medical isolation and quarantine units at prisons and jails other than Northern.

Martucci noted that the department has increased the CDC-suggested timeframe for transferring an inmate who tested positive for COVID-19 back to general population housing. Incarcerated people who have contracted the virus are not medically cleared until 14 days from the onset of symptoms, compared to the CDC recommendation of 10 days.

That means the amount of time someone is in quarantine could be extended if a person spends a prolonged period of time in close contact with another inmate who has coronavirus symptoms – a viable possibility in state correctional facilities, given the difficulty of social distancing – so they could go more than two weeks without being able to bathe themselves beyond a cursory wash from within their cells.

“My concern is that the way quarantine works, it can be extended, and as I understand it, can keep being extended,” said Sen. Gary Winfield, D-New Haven, co-chair of the Judiciary Committee. “If they’re taking what amounts to a bird bath, that’s not the same as a full bathing.”

“During the COVID-19 pandemic, the issue of hygiene is of utmost importance,” Winfield added. “If for an extended period of time you cannot have access to full hygiene, it becomes problematic.”

Martucci said the department is continuously revising its treatment and management plans as guidance from disease experts evolves. “All efforts are aimed at protecting the incarcerated population and the employees that care for them.”

As of Tuesday, 526 inmates have tested positive for COVID-19. Six people have died.