Before mass testing, Department of Correction tested about 6 percent of inmates for COVID-19 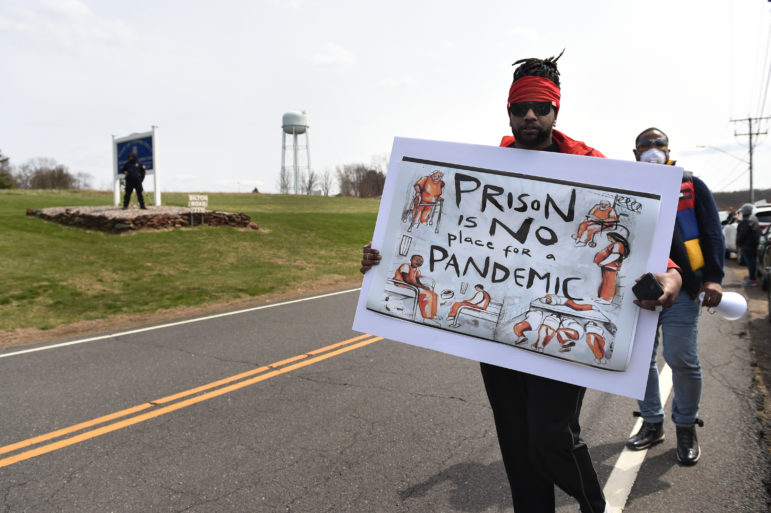 Protestors carry signs during a protest earlier this year in front of Northern Correctional Institution, a maximum security facility in Somers. One inmate at another prison says inmates fear being sent to Northern if they test positive for the virus.

The Department of Correction reported to a state legislator that as of Thursday it had tested 639 inmates for COVID-19 since the beginning of the pandemic. Almost 83 percent tested positive for the virus, it said.

“As you know, due to severe shortage of test kits, DOC was only able to test symptomatic inmates – not a random sample or universal one of inmates either system-wide or at an individual facility,” David McCluskey, DOC legislative liaison, wrote Thursday in an email to Sen. Gary Winfield, D-New Haven, co-chair of the Judiciary Committee.

The number of tested inmates reported to Winfield represents about 6 percent of the system’s total inmate population, which has declined significantly since March 1, the date DOC Commissioner Rollin Cook has identified as “the onset of COVID-19.” There were 12,411 people behind bars on March 1. On May 13, the last day for which data was available, there were 10,563.

The figures do not include the mass testing currently being conducted at Osborn Correctional Institution. Officials say they plan on testing all inmates and front line corrections staff by the end of June.

“The testing of all staff, as well as offenders, is essential for the public health and safety of us all,” Cook said in a memo sent to all staff on May 12. “I know that I can count on all of you to do your part – whether it is getting tested or helping others to get tested — to continue to help this Agency contain the spread of the coronavirus.”

Large-scale testing is likely to reveal a widespread outbreak. Authorities at correctional facilities in Ohio and Pennsylvania found that many more inmates were infected than previously thought after they tested their prison populations en masse.

“The asymptomatic population is critical to getting a hold on this,” Winfield said, describing the virus’ presence in correctional facilities as “an emergency,” though he has not heard it described in that way during the governor’s daily news briefings.

“We’re not hearing, ‘Listen we need more resources. Listen, this is imperative,'” Winfield said. “We need to know you understand the imperative nature of doing this.”

The department could be under-testing symptomatic inmates because the inmates themselves are hiding that they’re sick.

The DOC began transferring COVID-positive inmates to Northern Correctional Institution on April 7. Chad Petitpas, a 40-year-old man in custody at the Brooklyn Correctional Institution, said many of the men in his housing unit are ill but refuse to tell medical staff. They’re afraid they’ll be quarantined, unable to talk to their families or receive mail. They’re wary of being transferred from the medium-security Brooklyn Correctional to Northern, the state’s most secure and isolating prison.

“You’re basically gonna be put in an isolation cell with nothing,” Petitpas said over a phone call from the prison. “No TV, no radio, no mail.”

Many correction staff continue to not wear masks, Petitpas complained, despite directives from  Cook that DOC employees must “wear protective face-masks while on duty whenever social distancing is not possible.”

Petitpas lives in a dormitory-style housing unit. He shares a living space with about 114 other men. Each dorm is split into 19 cubes — a room with no roof or front wall — with three bunks in each cube.

“When you’re on your bunk, you’re probably about three feet away from the people in the bunk above or below you, and the bunks adjacent to you,” he said in a sworn statement filed in the ACLU of Connecticut’s federal lawsuit. “No one at the prison has told us to ‘socially distance’ or keep six to eight feet away from each other. I have seen those recommendations on TV, but I know that those safety guidelines are not for us. That is because ‘socially distancing’ is impossible here.”

Petitpas said he doesn’t feel sick, but he estimates about a third of the men he’s housed with do. One guy fainted in the shower last weekend. Others are coughing and popping Advil, trying to get rid of headaches they’ve had for a week, he said. One man is “so sick he’s purple.”

That inmate is coughing a lot, but he refuses to don a mask. “He knows he’s sicker than he’s ever been in his life, and he doesn’t [care] about the people around him,” Petitpas said.

Even if he wanted to, prison isn’t a place to tell on your peers, Petitpas said. “Nobody wants to be a rat.”

Around the time Petitpas was speaking on the phone about conditions inside the prison, a correctional employee began walking around the dorm, waking people up to tell them, inaccurately, “Chad says you’re sick. Are you sick?”

An officer’s identification of a potential informant by name “… has to discourage the vulnerable populations from wanting to come forward and report someone they are concerned about,” Petitpas said.

In a statement, a DOC spokesperson denied that there were a large number of infected inmates in a particular housing unit.

“The allegations made about Brooklyn Correctional Center turned out to be inaccurate,” said Karen Martucci, the DOC’s director of external affairs. “After receiving public concern that there were sick offenders in a particular housing unit, wellness checks were conducted with each Individual offender by the health services unit which did not identify any COVID-19 symptoms amongst the population.”

As he talked into the phone, Petitpas said he could see several men laying in their beds, their blankets pulled up to their eyes. “There’s a reason people are sitting in their bunks at 12 in the afternoon,” Petitpas said. “They’re sick as dogs.”