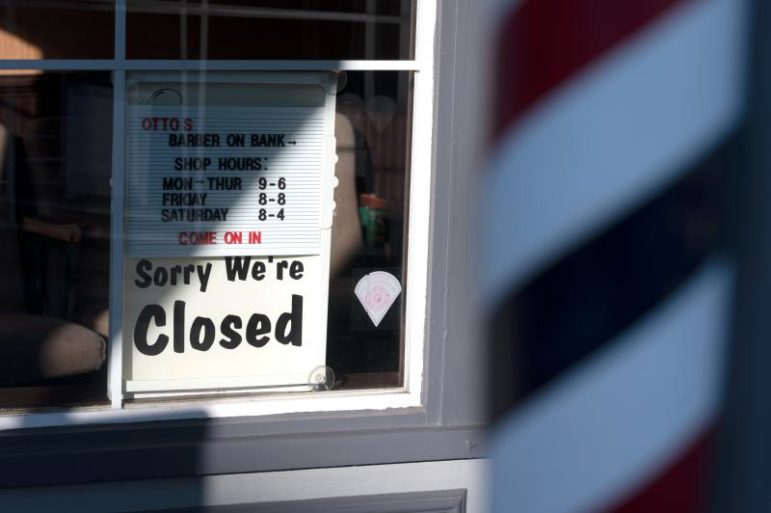 A closed sign in the window of a barbershop in New London.

You are going to have wait another ten days or so for a haircut in Connecticut.

After weeks of lobbying by some hair stylists who say reopening would be premature during the COVID-19 pandemic, Gov. Ned Lamont said Monday in a joint statement with Gov. Gina Raimondo of Rhode Island that both states are going wait a little longer.

“We’ve been hearing a lot of feedback from many owners and employees, and at this time I think the best approach is that we hit pause on the reopening of hair salons and barbershops, take a step back, and allow some more time as preparations continue to be made,” Lamont said.

The closing order applied to hair salons and barber shops was to ease on Wednesday, but Lamont and Raimondo say early June is now the target.

“I know how hard this crisis has been on close-contact businesses like hair salons and barbershops, and we’re working around the clock to get you back to work quickly and safely,” Raimondo said. “We look forward to continuing to coordinate with our regional partners as we work toward reopening these businesses in early June.”

A private Facebook group, CT Stylists for Late Stage Openings, was created on May 5 as an organizing and communication tool. It had 3,672 members as of Monday. Many had urged the administration to delay the opening, saying there were too many questions about whether they could resume business without endangering clients or themselves.

At his daily briefing, Lamont apologized to those who want to open — or at least had prepared by lining up appointments.

“I apologize because I know that some of you were all set and ready to go on May 20,” Lamont said. “Give us a little more time for all your peers to get up and operating. Make sure your employees feel confident and comfortable going back if appropriate.”

Some stylists had already told their clients on Facebook they would not be ready to reopen this week. Greg Cordeira, who has a shop in West Hartford, said he reconsidered his original decision to reopen on Wednesday and was going to wait until June 1. (That now also is the governor’s target.)

“The response has been very favorable. ‘We trust your instincts.’ It’s been real positive support from my people,” he said.

Beth Records, a stylist in Guilford, said many in the industry were dubious about the state’s decision to allow hair salons to open, but not nail salons.

“What  is the metric, the criteria that makes it allowable for a hair salon and not a nail salon?” she said. “Are we opening for consumer demand and not in the interest of public health?”

Lamont conceded last week that consumer demand was an element of the decision.

Cordeira said he was happy to see the delay.

“It gives me more time to clean,” he said.

Cordeira said he already purchased gowns and masks and removed a waiting area, magazines and a coffee maker.

“Some people will stop in and sit for a while,” he said. “It no longer will be the community meeting place.”