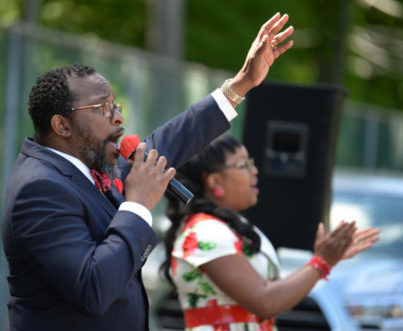 As police continued to battle protesters across the nation Sunday, Connecticut’s black pastors preached non-violence, and even as they decried the deaths of George Floyd and other African Americans at the hands of white law enforcement, pleaded with parishioners to stay calm.

“This is not the first time we have to pray and ask God for strength to endure another wrongdoing” said the Rev. Ronald Holmes, senior pastor of Gethsemane Missionary Baptist Church in Bloomfield.

Gov. Ned Lamont, meanwhile, issued a video on Twitter that showed him wearing an black tee-shirt emblazoned with “I can’t breathe,” some of Floyd’s last words that have become a protest slogan nationwide.

Lamont said he was “particularly shocked” that no one tried to stop Floyd’s murder, “that nobody yelled ‘stop, enough.’” He also praised Bridgeport Police Chief Armando Perez for his efforts to prevent an outbreak of violence or rioting in that city on Saturday night.

The governor also quoted Perez, who was born in Cuba, for saying: “I would have been out there demonstrating as well, but I was busy keeping the peace.”

Angry protesters in Bridgeport, like demonstrators many cities, denounced Floyd’s killing — and, in Bridgeport’s case, that of 15-year old Jayson Negron who was shot and killed by officer James Boulay three years ago. The shooting was ruled a justifiable use of deadly force.

Floyd is just the latest black male to die in police custody. Accused of trying to pass off a counterfeit $20 bill, he was arrested by four Minneapolis police officerz. One of them, Derek Chauvin, knelt on Floyd’s neck for more than eight minutes and has been charged with third degree murder. Protesters and critics say  the charge isn’t harsh enough.

Floyd’s death unleashed a wave of protests nationwide. Sunday, there were rallies and protests in several Connecticut towns, including New Haven and Waterbury, where protesters temporarily closed sections of Interstates 95 and 84. 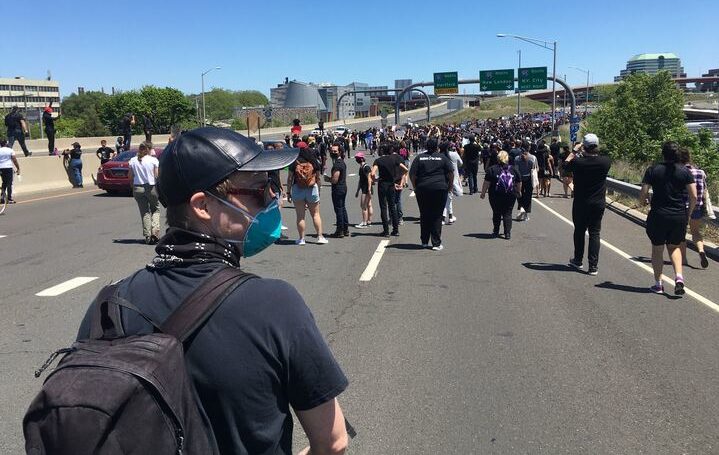 Protesters on I-95 in New Haven stopped traffic for about two hours.

In New Haven, activists filled the southbound side of the interstate near Long Wharf, stopping traffic in both directions for about two hours.

On the northbound side of the highway, motorist Fran McDonald climbed out of his stopped car to watch the demonstration. He said he was travelling from New York back home to Massachusetts, but was not angry about the delay in his trip.

“Everything I’ve seen here has been incredibly powerful and peaceful,” McDonald said, “and I’m hoping there’s a big takeaway for everybody that’s involved — not only on the marching side, but for the rest of us who are mildly inconvenienced by a mild delay, compared to what we have to fix in this country.”

While the protests have been largely peaceful in Connecticut, in some cities, including New York, Los Angeles, Philadelphia, Atlanta, Miami and, of course, Minneapolis, protesters have looted stores, set fire to buildings and police cars, and thrown firecrackers, bottles and other projectiles at police.

In tweets, President Donald Trump has called protesters “THUGS” adding, “when the looting starts, the shooting starts,” a phrase with racist origins used by a former Miami police chief in the late 1960s in during a wave of civil rights protests.

Sunday, with a political spin, he urged use of the national guard: “Get tough Democrat Mayors and Governors,” Trump tweeted. “These people are ANARCHISTS. Call in our National Guard NOW. The World is watching and laughing at you and Sleepy Joe. Is this what America wants? NO!!!” 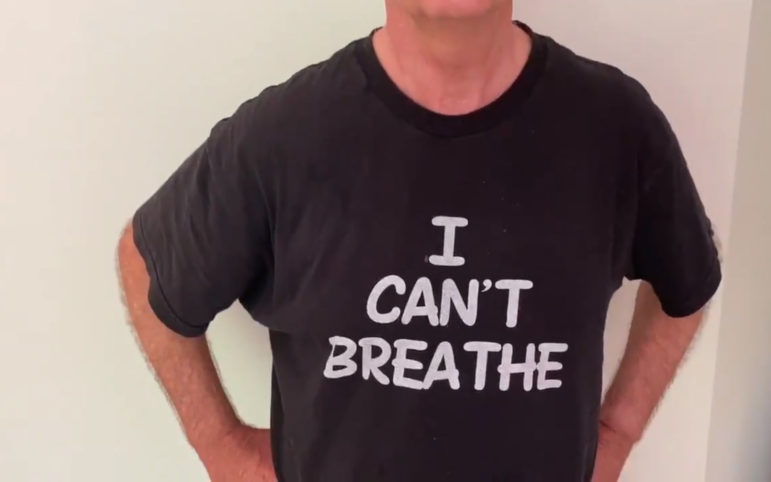 At the end of Gov. Ned Lamont’s short video comments Sunday, the camera pans down to reveal his “I can’t breathe” tee-shirt.

For the pastor,  Sunday was going to have special significance since it was the first time in three months that he would actually see his parishioners during a drive-in service at his church. Like many religious leaders in the state, Holmes had been forced to move his services online because of the pandemic.

The day was also special to the pastor, because it was Pentecost Sunday, a commemoration of the day Christians say the Holy Spirit descended upon the apostles of Jesus Christ, an event Holmes called “the birth of the church.”

But Floyd’s death set the tone of many sermons on Sunday, and Holmes’s was no different. The preacher stressed the importance of forgiveness to the parishioners who listened to him from their cars.

But, while he decried the rioting and looting that marked many protests, Holmes told the Mirror “there is a time and place for everything,” including the anger demonstrated by the protesters.

“The Boston Tea Party was not a peaceful protest,” he observed.

‘A vestige of slavery’

The Rev. John L. Selders, Jr., the organizing pastor of Amistad United Church of Christ in Hartford, is one of the leaders of Moral Monday CT, a group that organized a “virtual rally”  that included activists from Black Lives Matter and Ferguson, Mo., where 18-year-old Michael Brown was fatally shot by a white police officer in the summer of 2014.  Selders  grew up in Kinloch, Mo., a town near Ferguson, and said Brown’s death “touched me in a personal way.” 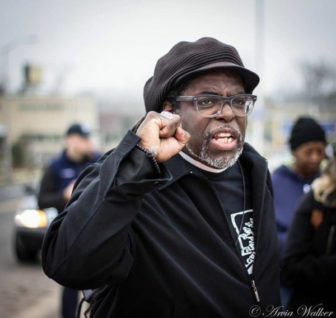 The Rev. John Selders, who helped organize a demonstration in Hartford, says police brutality is a “vestige of slavery.”

Friday, Selders helped organize a non-virtual, traditional protest in Hartford that attracted at least 2,000 people. Although the demonstration was peaceful, Selders said “I don’t know that Connecticut is any different from any other place” that as suffered rioting.

Selders also said he attended the Bridgeport’s demonstration on Saturday “and in many instances, it was touch-and- go.”

As of Sunday morning, about  5,000 National Guard soldiers and airmen had been activated to respond to civil disturbances in 15 states and the District of Columbia, with another 2,000 prepared to activate if needed.  Although there were no plans to activate Connecticut’s guardsmen, Connecticut National Guard spokesman David Pylik said “we’re continuing to monitor the situation and keep an eye on things.”

To Selders, the deaths of black men by white law enforcement officers is a “vestige of slavery” that is fueled by white supremacy.

The outbreak of protests are also a product of disparities in income, health care, education and opportunity, civil rights leaders say.

In Minneapolis, for instance, a typical black family earns less than half as much as a typical white family and experience other racial disparities in home ownership and education.

Many of the Connecticut protesters wore masks and attempted to maintain some social distance. State officials Sunday reported another dip in COVID-19 hospitalizations, but the number of deaths from the disease continues to creep up toward 4,000, with 3,944 official deaths.

The worldwide coronavirus pandemic has aggravated and illuminated many of the country’s racial disparities, and a few governors, including Maryland’s Larry Hogan, said they were concerned the outbreak of demonstrations would lead to a spike in COVID-19 cases, a disease that has already infected blacks and Latinos at much higher rates than non-Hispanic whites.

Atlanta Mayor Keisha Lance Bottoms said on CNN on Sunday that she, too, was “extremely concerned” about the spread of the coronavirus during the protests.

“It’s a pandemic, and people of color are getting hit harder,” she said. “We’re going to see the other side of this in a couple of weeks.”

And Scott Gottlieb, a former Food and Drug Administration commissioner and a member of the Reopen Connecticut Advisory Group, said on CBS’s  Face the Nation “there’s going to be a lot of issues coming out of what’s happened in the last week, but one of them is going to be that chains of transmission will have become lit from these gatherings.”