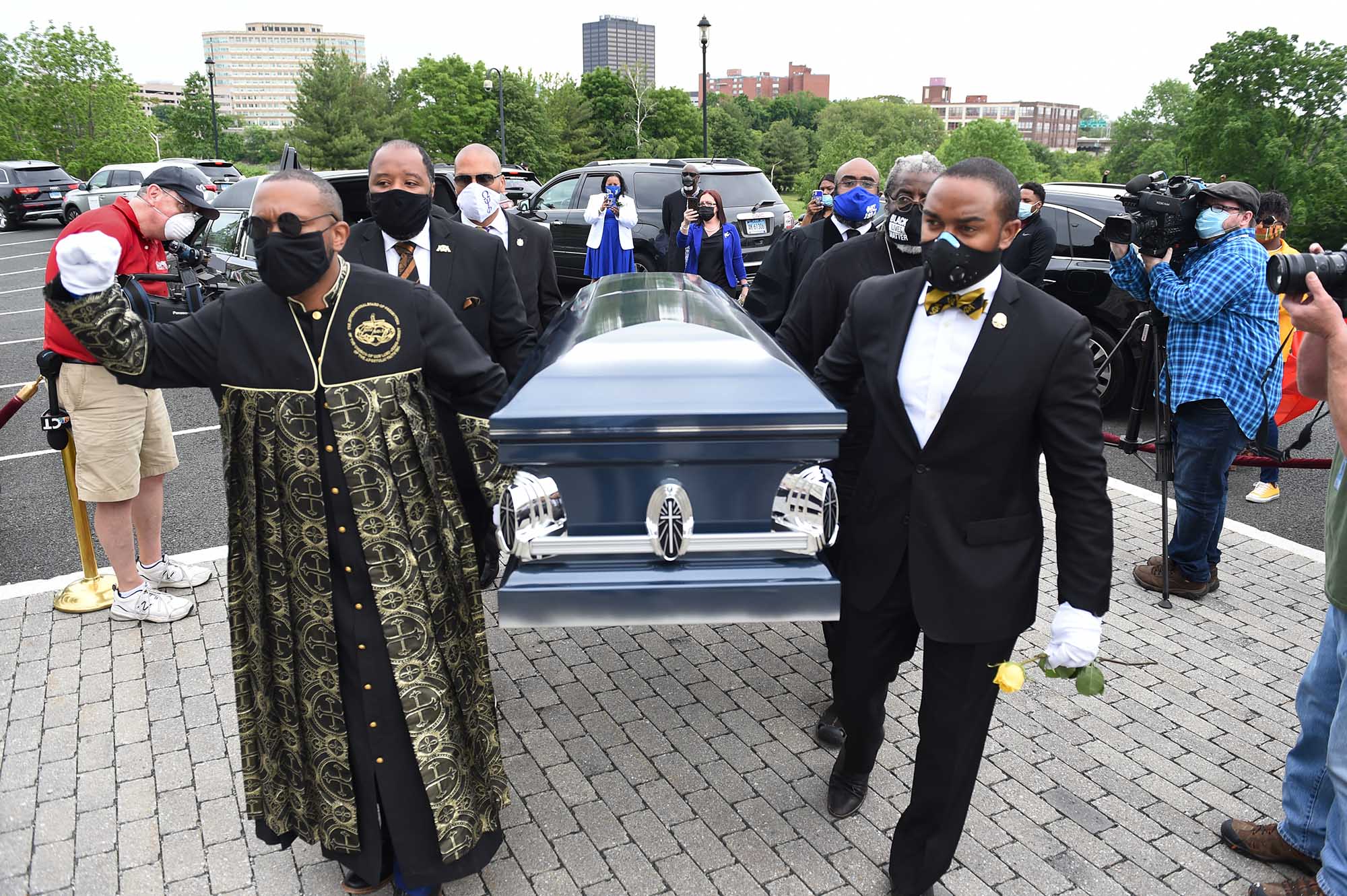 Pall bearers carry a casket up the steps at the state Capitol in Hartford during a mock funeral for George Floyd who was killed by Minneapolis police on Memorial Day.

Six pall bearers, all black men wearing white gloves and cloth masks, met the hearse. One, a pastor in black and gold clerical robes, raised a clenched right fist as he helped  carry the steel-gray casket Wednesday to a bier outside the Connecticut Capitol in Hartford.

His death at the knee of a white police officer has been marked by protest and pepper spray, outside the White House and across much of the U.S. And here a line of police officers stood waiting by the north steps of the State Capitol.

But it was an expression of respect, not intimidation. They were chiefs and ranking officers of the Capitol police and departments in Hartford and its suburbs, all invited by a minister’s wife, Melinda Johnson.

Johnson also is the director of community engagement at the YWCA Hartford Region, an institution that has redefined its mission in recent years as empowering women and eliminating racism. She was ready to engage.

Her boss, Adrienne Cochrane, smiled and told the mourners that Johnson called her at 6:45 a.m. Saturday and asked, “What we gonna do?”

Four days later, a seemingly endless funeral cortege departed from Hopewell Baptist Church in Windsor, following a hearse donated by Howard K. Hill into Hartford on North Main Street, then right on Tower and left on Barbour — a tour of places that Hill says are untouched since the assassination of Martin Luther King Jr.

Hartford Mayor Luke Bronin and Lt. Gov. Susan Bysiewicz were in the procession. House Republican Leader Themis Klarides watched for a while. Gov. Ned Lamont paid his respects later, giving rise to a challenge by Melinda Johnson’s husband, Pastor A.J. Johnson of the Urban Hope Refuge Church, to do better — much better.

The black clergyman, the pall bearer who raised his fist, took a breath.

The pastor’s wife leaned forward and spoke into her husband’s ear.

Melinda Johnson would say later there was plenty of anger and frustration, a desire to be heard in the halls of power. But above all, Johnson said, she wanted a moment to come together, something lost in the pandemic. She wanted a place to grieve.

“We also are in anguish,” she said.

One by one, mourners representing the “Divine Nine,” the nine historically black Greek letter fraternities and sororities, were called forward. They placed flowers, yellow and red roses, then African violets on the coffin. Names of other victims of police violence were read.

A.J. Johnson asked them to think of those unknown to the public, “all those people before iPhones.”

Cochrane, who fought tears at times, thanked the racially diverse group for coming, but warned that difficult conversations lay ahead.

“Our job is not to make you comfortable,” she said.

There were only hints of where to go, what to do. But she and others said a call to action is coming, one that will be directed at the governor, the General Assembly and Connecticut as a whole.

“If there is no call to action, it’s just words,” said Cochrane, the chief executive of the YWCA. “People said why a funeral procession? Why this? It’s the symbolism. So, it’s George Floyd today, but it represents every last black man and woman who has died senselessly and unjustly. It’s the symbolism.”

America is watching and listening, she said, and it’s an opportunity that must be grasped. 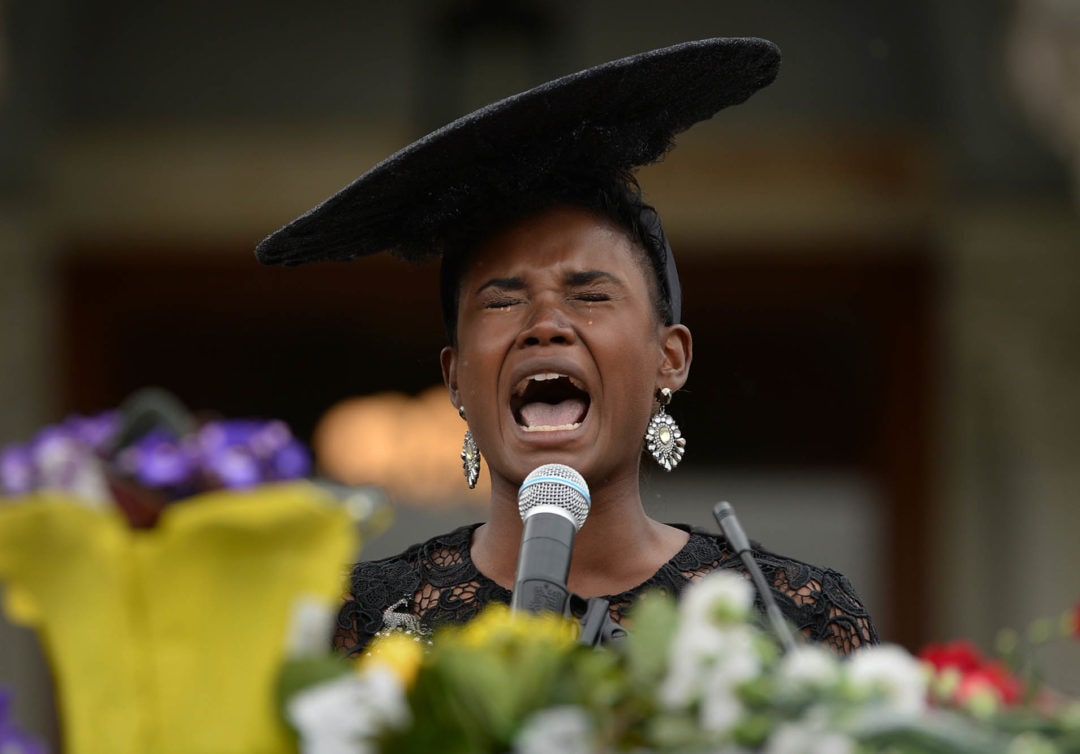 Melinda Johnson speaks with intense emotion before a casket topped with flowers at a mock funeral at the state Capitol in Hartford for George Floyd. Johnson is director for Community Engagement and Advocacy at the YWCA and was the event organizer.

Tears streaming down her face, Melinda Johnson said no one can know when or if an opportunity to make a difference will come.

“We wait for someone to call our name on a stage where we can make a contribution that matters, where we can say something, do something that matters,” she said. “George Floyd took his very last breath and said, ‘Mama, I can’t breathe.’ He didn’t know that it would take him laying in a box dead before a nation called his name.”

The only legislator to speak was state Sen. Douglas McCrory, D-Hartford, an educator not known for oratory on the Senate floor. He stepped to a lectern before the coffin,  pulled down his mask and began to talk.

I know it’s popular for elected officials and anyone else to be out here today, saying how they care and how they’re concerned. That’s a moment. And I ain’t got no time for a moment. We need a movement.”

“I tell you what we are, black folk, we’re tired. We’re numb. We’re traumatized and we don’t know what to do next,” McCrory said. “I can’t tell you how many brothers that I spoke to who are not political, who are just everyday brothers, that reached out to me and asked me, ‘What we gonna do?’ ”

McCrory acknowledged the law enforcement officers, the white mourners interspersed among the black and brown. He said he appreciated their presence. He asked them to prepare for uncomfortable conversations, “not kumbaya.”

“It’s time to put words to action. We’ve been talking too much. It’s time for action,” McCrory said. But he said that action must be focused, directed at the centers of power.

He urged peace — action, but peace. 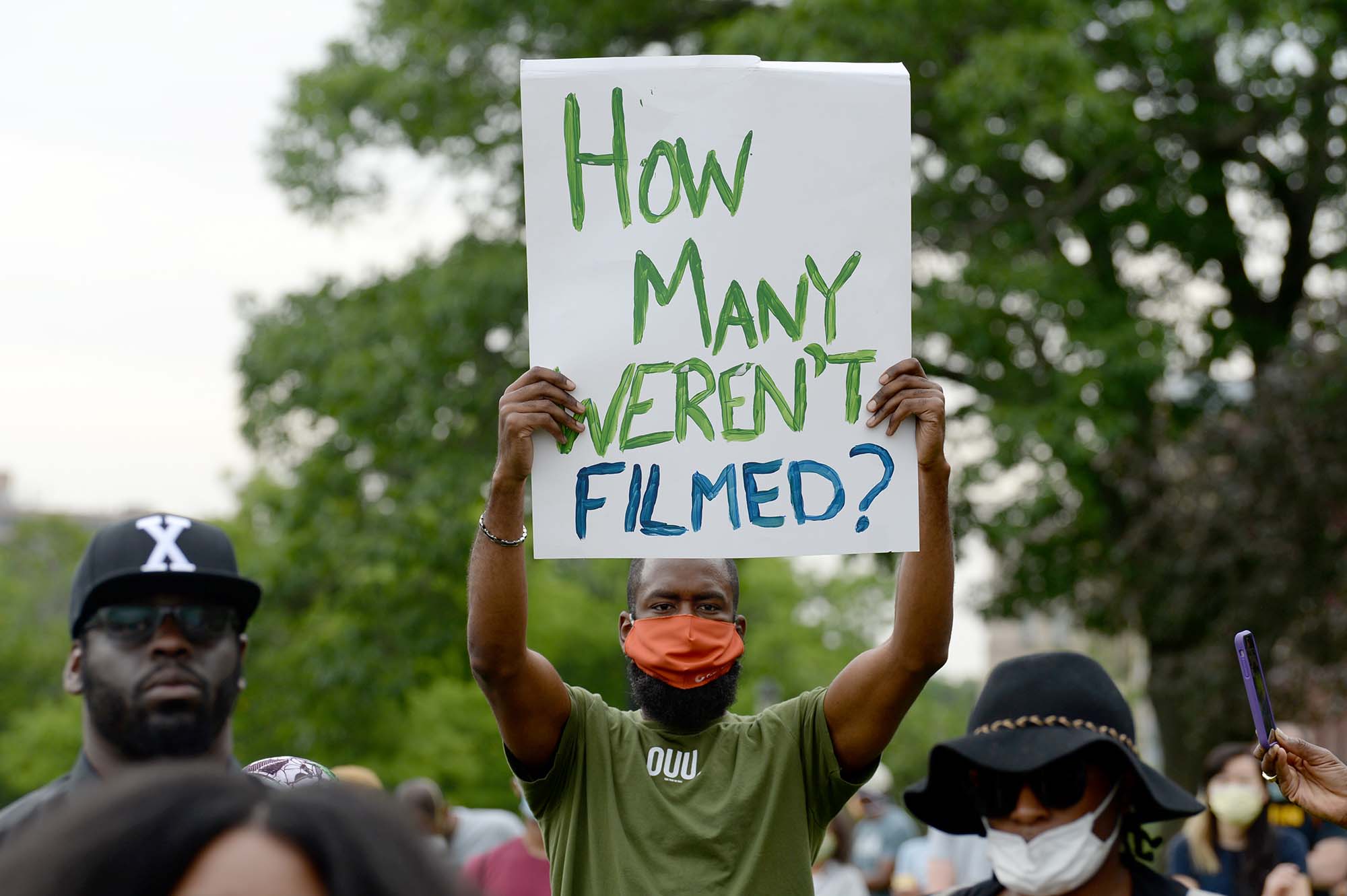 The memorial was for George Floyd, but also those killed before iPhones, as one minister said.

McCrory said America was at a moment, much as it was in the days after King’s assassination. He wondered if there was an opening to attack the racism that he sees so deeply burrowed into American life.

“The odd thing about it, it’s so much ingrained in American culture that when we protest against racism, people think we are protesting against America,” he said. “And we’re not. We’re not.”

McCrory said everyone must decide if the moment will pass or be a catalyst.

“There is a difference between a moment and a movement,” McCrory said. “And I know it’s popular for elected officials and anyone else to be out here today, saying how they care and how they’re concerned. That’s a moment. And I ain’t got no time for a moment. We need a movement.” 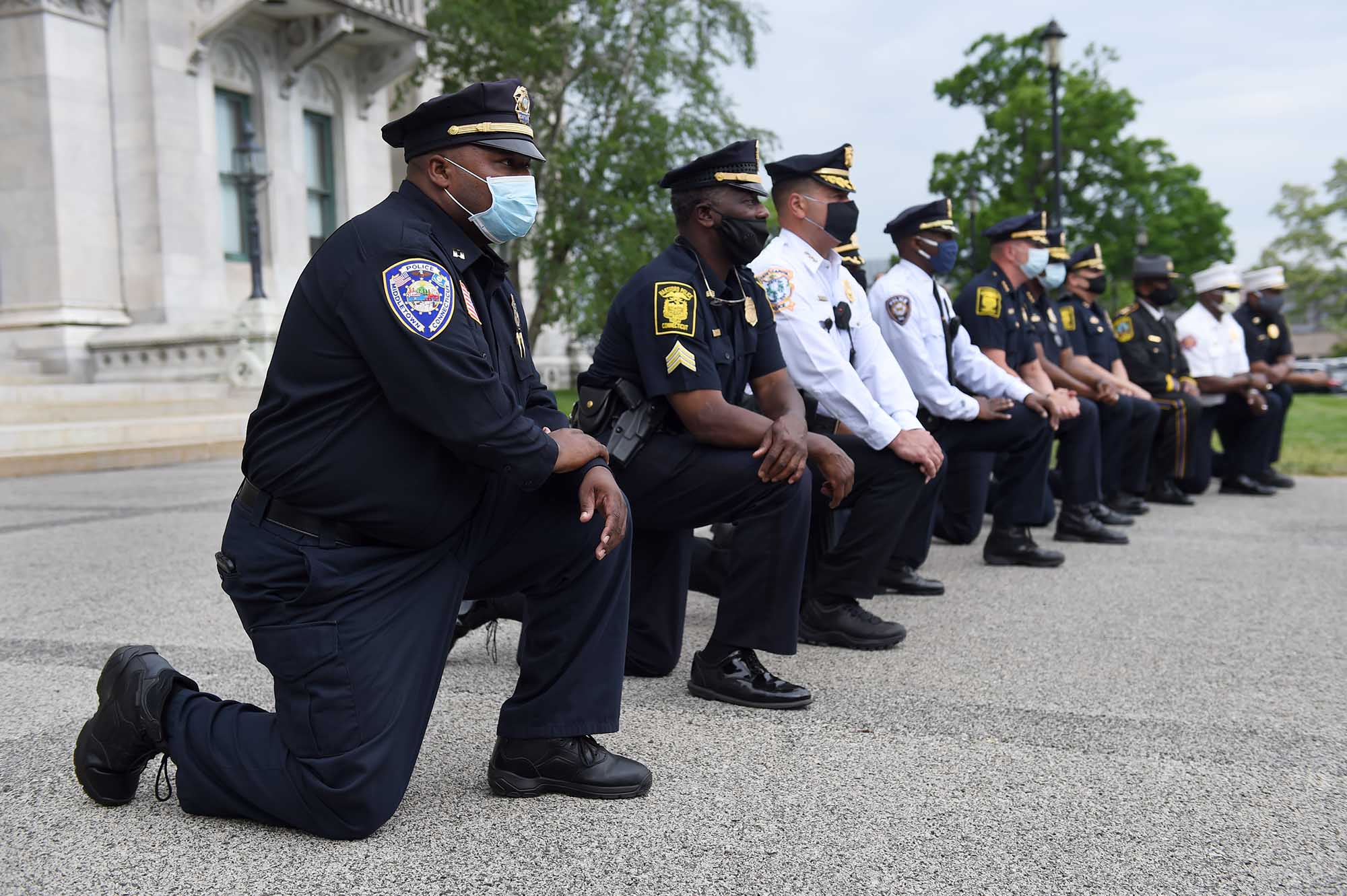 Police chiefs from across the state take a knee to show solidarity with the mourners.