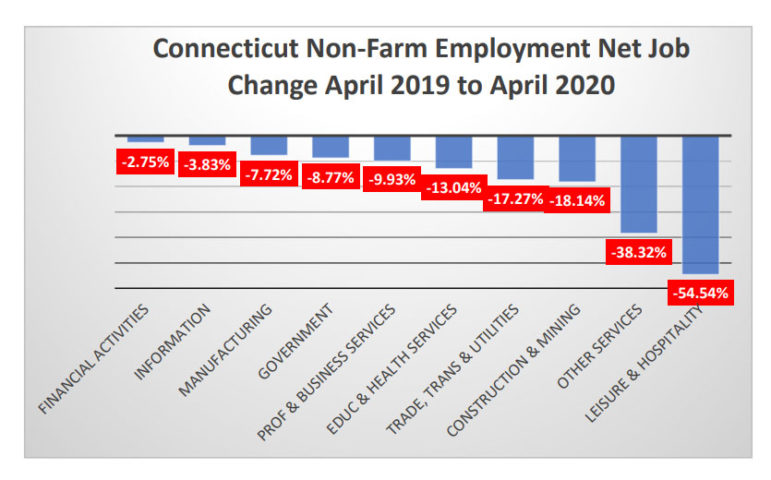 Washington – If Connecticut does not receive more stimulus money from the federal government, nearly 60,000 jobs in the state could be lost, hampering an economic recovery,  an  analysis by the Economic Policy Institute says.

States, including Connecticut, are projected to lose hundreds of billions of dollars in tax revenues because businesses shut down and workers lost their paychecks. State and local governments have also suffered unexpected expenses in responding to the coronavirus pandemic.

EPI, a non-partisan Washington D.C.-based think tank, said that a failure by policymakers to address the shortfalls at the federal level could cause the United States to end 2021 with 5.3 million fewer jobs — 59,200 of those in Connecticut.

“The coming months will see intense downward pressure on state and local spending,” the EPI report said. “Reductions in this spending will in turn significantly slow recovery from the current economic crisis.”

The EPI report said this is “not an abstract concern.” It said the slow recovery in state and local spending following the Great Recession of 2008 delayed a recovery in U.S. employment “a full four years.” Connecticut’s recovery was even slower than the national average.

And the coronavirus’s impact on the national and state economy is much more more severe than than that of the 2008 recession.

Some of the lost jobs will be recovered as the nation shakes off the coronavirus threat and the economy inches back towards normalcy, but many jobs will be lost forever, the EPI said, especially if the federal government does not help states and local governments fill budget shortfalls.

“If Congress passes some level of aid that is insufficient —less than $1 trillion— they will needlessly guarantee a significant job gap by the end of 2021,” the EPI report said.

Ned Lamont has joined other governors in  asking for more federal help. Cities and county governments are also lobbying Washington D.C. for help.

Earlier this month, Connecticut Comptroller Kevin Lembo estimated the pandemic would result in a $619.6 million deficit in the state’s 2020 budget.

“Additional federal resources are necessary to supplant state and municipal government revenue losses and to lend support to the thousands of Connecticut residents who are out of a job through no fault of their own,” Lembo said in a letter to Lamont. “We are one nation facing one crisis together. We need our federal government to step up.”

“The longer the federal government waits, the more difficult it will be for the state and municipalities to fully recover,” he said. 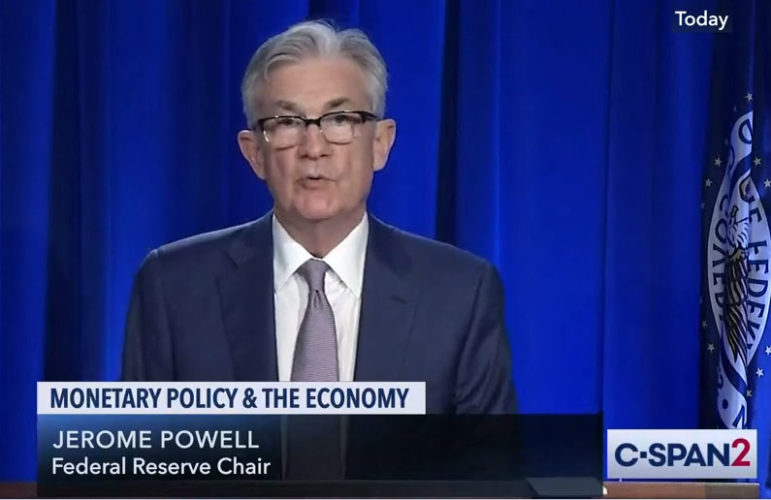 The Trump administration and congressional Republicans are largely rejecting the governor’s calls for help and Democratic efforts to provide states with more stimulus money. House Democrats approved nearly $1 trillion in pandemic aid to state and local governments in HEROES Act last month, but the GOP-controlled Senate has declined to take up that legislation.

The massive CARES Act, enacted at the end of March,  provided Connecticut with $1.4 billion in aid, but mandates the money be used to pay for expenses directly tied to the pandemic, not for shortfalls in revenues. The nation’s governors have clamored for more federal help and for the flexibility to use that money to fill holes in their budgets.

Federal Reserve Chairman Jerome Powell said on Wednesday that millions of  U.S. jobs may be gone for good and more aid from Congress is needed to stem some of those losses.

Treasury Secretary Steven Mnuchin, testifying on Capitol Hill, said another stimulus bill may be needed. But Mnuchin limited his recommendations to lawmakers to direct aid to individuals – perhaps in the form of a new stimulus check or bonus for those who return to the labor force —  and help to businesses who’ve been hardest hit by the pandemic, not state or local governments.

“Each dollar in state and local spending cuts triggers a multiplier effect as governments end contracts with local businesses and public-sector employees see income drops and, in turn, pull back on their consumption spending,” the study said.

It also said that, if Congress approves only $500 billion in relief, then the shortfall will be smaller, but will still exceed 2.6 million jobs by the end of 2021, with 29,100  of those jobs lost in Connecticut. If Congress passes only $300 billion, then the shortfall will be 3.7 million jobs, with 41,400 jobs lost in Connecticut.

“In short, $300 billion in aid to state and local governments would not even move the economy’s health to the level it sat at during recent recessions—and this is 18 months from now,” the report said.