Congress opens its own probe of the nursing home industry 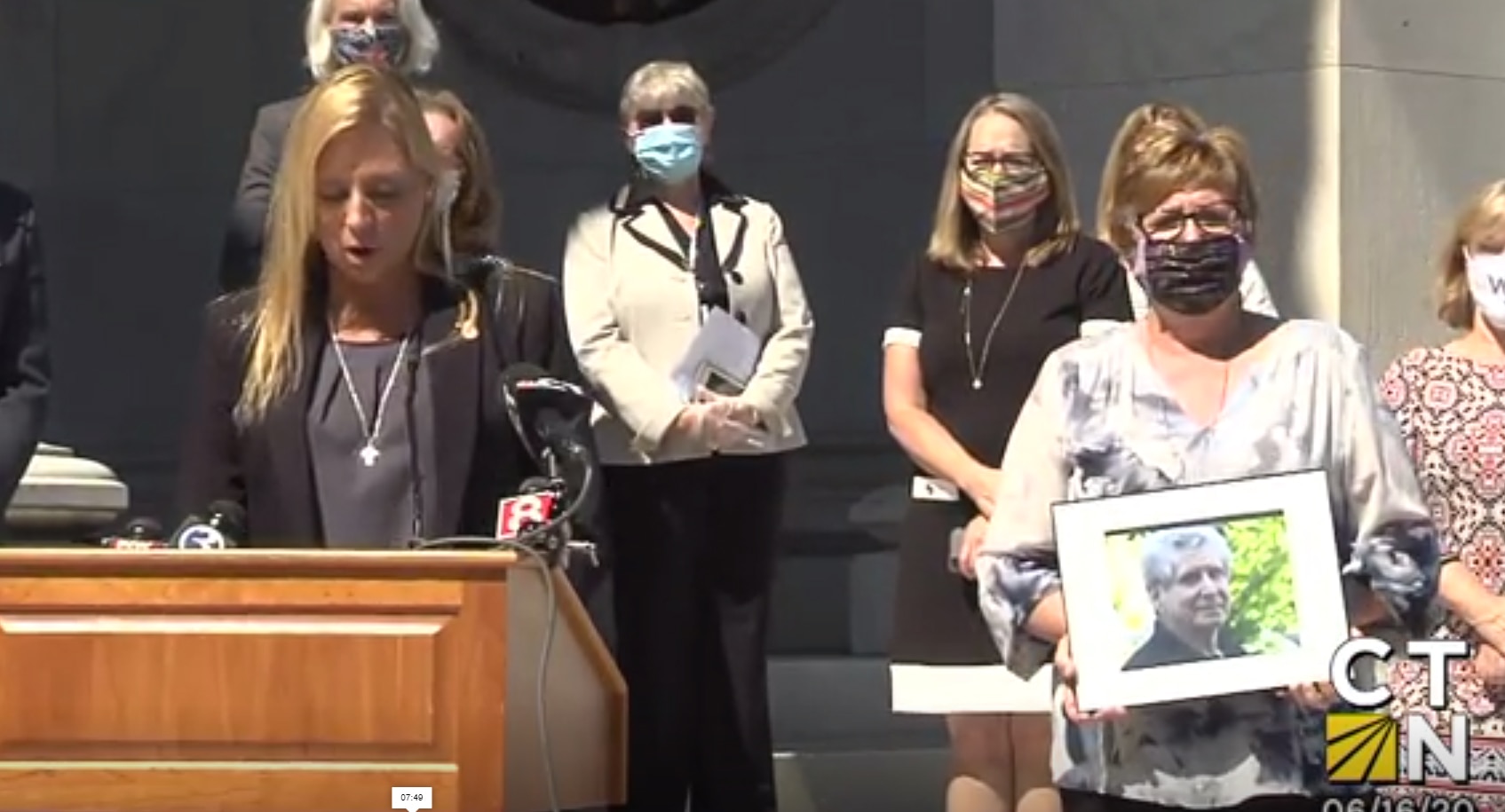 State Rep. Michelle Cook addresses the crowd while a colleague holds a photo of her late father-in-law who died of COVID-19.

State lawmakers frustrated by the mounting COVID-19 deaths in Connecticut’s nursing homes on Tuesday issued a series of pointed questions they want to see addressed as part of an investigation ordered by the governor’s office.

“What went wrong? What steps were missed?” asked Rep. Michelle Cook, whose father-in-law died after contracting the disease. “How have we lost over 2,500 lives in our nursing homes due to COVID?”

Federal lawmakers have similar questions, and are opening an inquiry of their own.

Gov. Ned Lamont last week said the state would hire a third-party firm to review the response to the pandemic by nursing homes. The analysis will look at the actions taken by nursing home executives, facility managers and workers, along with state officials. Connecticut’s Department of Public Health licenses the facilities and has been tasked with overseeing inspections before and during the pandemic. It is also one of the agencies in charge of distributing personal protective gear and testing materials to nursing homes and other long-term care facilities.

A request for proposals was issued on Friday. The organization chosen will be required to submit an interim report and recommendations to the governor and legislative leaders no later than Aug. 15. Final documents are due on Sept. 30.

As of last Wednesday, 2,648 nursing home residents had died from COVID-19 or were presumed to have died from the virus. Nursing home fatalities represent 64% of the state’s total coronavirus deaths. Connecticut has recorded 8,669 cases of the disease among those residents.

Legislators said Tuesday that while the review is expected to take a broad look at the nursing home industry, there are several specific questions they want to see addressed. They include:

The request for proposals outlines some of these issues and includes others. The state has asked the outside firm to examine the availability of testing materials and protective equipment; staffing challenges; staff expertise and skill level; communication and coordination; inspection, certification and regulatory framework; data availability and reporting; and ability to respond to outbreaks, among other issues. 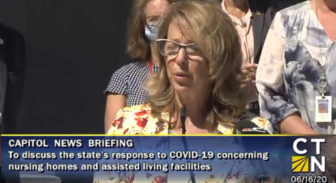 “We appreciate that the report is coming to legislative leaders … so we can look at any legislative action that needs to be taken,” said Rep. Dorinda Borer, a West Haven Democrat. “We also appreciate that the independent review not only looks at the preparedness and response of the nursing home industry to a pandemic, but it also looks at the preparedness and response by the state agencies. That provides for a complete, honest assessment.”

Borer is a co-chair of the bipartisan Women’s Caucus, which prepared the questions released Tuesday.

Cook, a Torrington Democrat, said her 90-year-old father-in-law, William J. Cook Jr., known as “pops,” died after testing positive for COVID-19. “This is why I asked for a statewide investigation,”she said Tuesday. At the time, his nursing home had told the family that there were no residents with coronavirus inside the facility. She did not disclose which nursing home he lived in.

Leaders of the state’s two major nursing home associations – collectively representing more than 170 of Connecticut’s 213 facilities – reiterated their support for the review and asked that it focus on the availability of protective gear, funding for nursing homes, and regulatory oversight and inspections by state health officials.

“The review must be inclusive of the response and actions of the federal government, the state government, and the skilled nursing facility sector at each juncture of the pandemic’s timeline,” said Matt Barrett and Mag Morelli, the groups’ leaders. “For instance, the extent of the asymptomatic nature of the virus was unknown in the early stages of the pandemic – a critical characteristic that hampered prevention and containment strategies.”

Lamont has ordered the review to be completed by late summer to prepare for a possible second wave of COVID-19 this fall.

The review will look into the response by Genesis HealthCare, SavaSeniorCare, Life Care Centers of America, Ensign Group, and Consulate Health Care.Genesis has 18 homes in Connecticut. SavaSeniorCare has two.

Clyburn, who is chairman of the newly created House Select Subcommittee on the Coronavirus Crisis, is seeking information from these companies on a wide range of issues – from the scale of the outbreak in their facilities to shortages in staff and protective equipment.

Each of the companies has dealt with COVID-19 outbreaks at multiple facilities. Genesis has recorded more than 1,500 cases across its 187 homes nationwide, according to the coronavirus crisis subcommittee. It operates Kimberly Hall North in Windsor, which has experienced some 44 deaths. The panel also said that about half of the homes owned by these companies have not been inspected for their preparedness to contain the spread of the virus.

Lori Mayer, spokesperson for Genesis, said the company “supports efforts to better understand the virus, and how we as a nation and as a provider can improve care of our nation’s seniors. Throughout this pandemic, Genesis has been very transparent and forthcoming, providing information to patients, residents, families and the media, as well as state and federal governments.”

Clyburn is also seeking information from the Centers for Medicaid & Medicare Services about whether the agency properly managed the outbreak in nursing homes, and whether it made sure the facilities had enough COVID-19 tests and other materials.

Rep. Steve Scalise, R-La., the top Republican on the coronavirus panel, said he wants to look into the roles that states played in the crisis, especially those that did not follow federal guidelines for properly isolating infected residents.

“It’s a major scandal,” Scalise said. “We’ve got to get to the bottom of it.”

A union for many of the state’s nursing home workers, meanwhile, issued demands it said the state should meet to prevent a similar catastrophic event from harming the people essential to protecting the most elderly and frail. 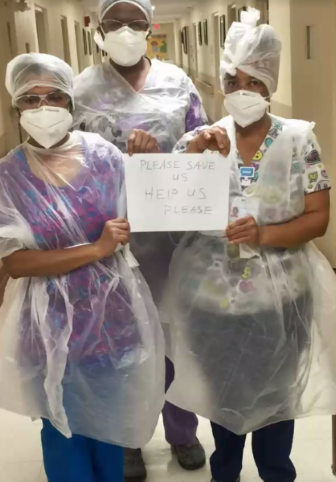 The group, which represents about 6,000 nursing home workers in the state, also asked that employees of those facilities and those working in other areas of long-term care are treated as experts in their field.

Rob Baril, the union president, said that 14 members of 1199 have died of COVID-19, including 11 long-term care workers. Hundreds have reported testing positive, and some have passed the disease to their loved ones.

“We all know the basic understanding that we cannot protect our patients if we are at risk of catching the virus ourselves and spreading it to some of the other residents,” Baril said.

Gloria Duquette, who works at Kimberly Hall South in Windsor and at St. Mary’s in West Hartford, said she passed the virus to her husband.

“He lost money because he had to be out of work,” she said. “He never would have gotten sick if it weren’t for me bringing it home to him. But I have to work to survive.”

Baril criticized facility owners and the state for their handling of worker protections.

“They knew what they were going into,” he added, referring to the employees. “They understood the risks that they were taking. What they did not agree to do was to be treated as if their lives did not matter.”