Should summer debate on racial inequality stop at police accountability? 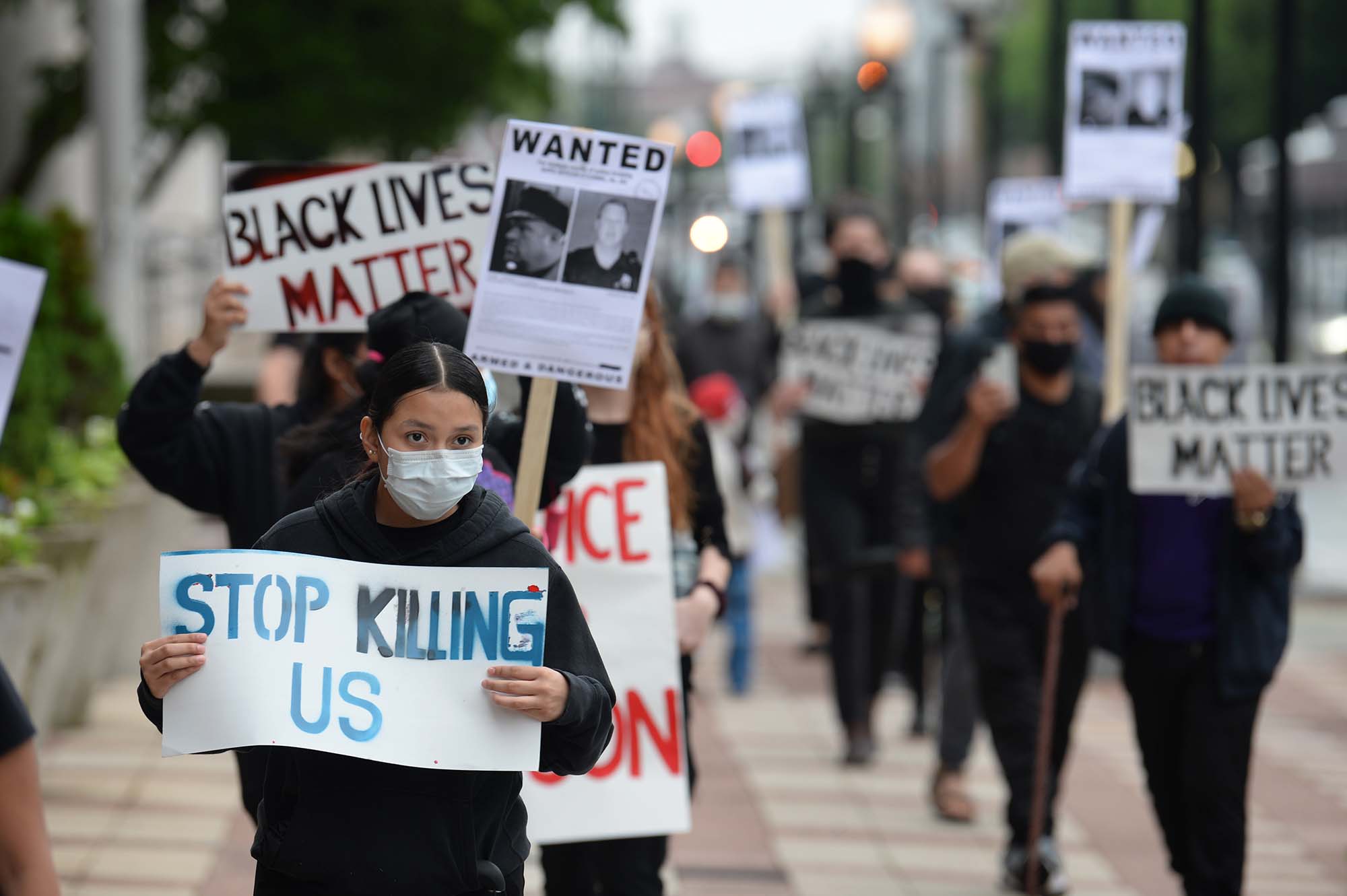 A group of protestors from the immigrant and black communities arrive at city hall in New Haven on June 11 after marching from the Fair Haven section to show their solidarity in fighting  racial injustice. There have been protests nearly every day in Connecticut since George Floyd’s death, which spurred public outrage about police mistreatment of minorities.

While Connecticut’s commercial reopening progresses, state lawmakers still haven’t settled on a date or agenda for a special legislative session this summer. The sticking point isn’t centered on the usual arguments about highway tolls or taxation, however. It’s about racial inequality.

Simply put, should the July special session be limited to police accountability reforms that are relatively easy to implement without major expense?

Or should longstanding disparities in health care, education, housing, and economic opportunity — recently exposed and exacerbated by the coronavirus pandemic — also be on the table, even if their solutions are far more difficult and costly?

Democratic lawmakers, who hold majorities in both the House and Senate, still haven’t resolved these questions.

“If you had a life-threatening illness, would you deal with it immediately, or would you put it off?” asked Rep. Robyn Porter, D-New Haven, a member of the Black and Puerto Rican Caucus. “Some things are urgent and require urgent care.”

National outrage against racism and police violence since the killing of George Floyd in Minneapolis has galvanized legislators in Connecticut and elsewhere to act.

If you had a life-threatening illness, would you deal with it immediately, or would you put it off? Some things are urgent and require urgent care.” — Rep. Robyn Porter, D-New Haven

But Porter, who favors a broader agenda for the special session targeted by leaders for mid-July, said the problems of racial inequality extend far beyond police violence. And the pandemic has exposed Connecticut’s racial gaps in a manner rarely seen, and one that deserves immediate attention, she added.

COVID-19-related deaths and infection rates are disproportionately higher among minorities, as is unemployment.

Connecticut municipalities are projecting $470 million in pandemic-related revenue losses and added costs, and most of the state’s cash-strapped urban centers are the least prepared fiscally to absorb this economic shock. 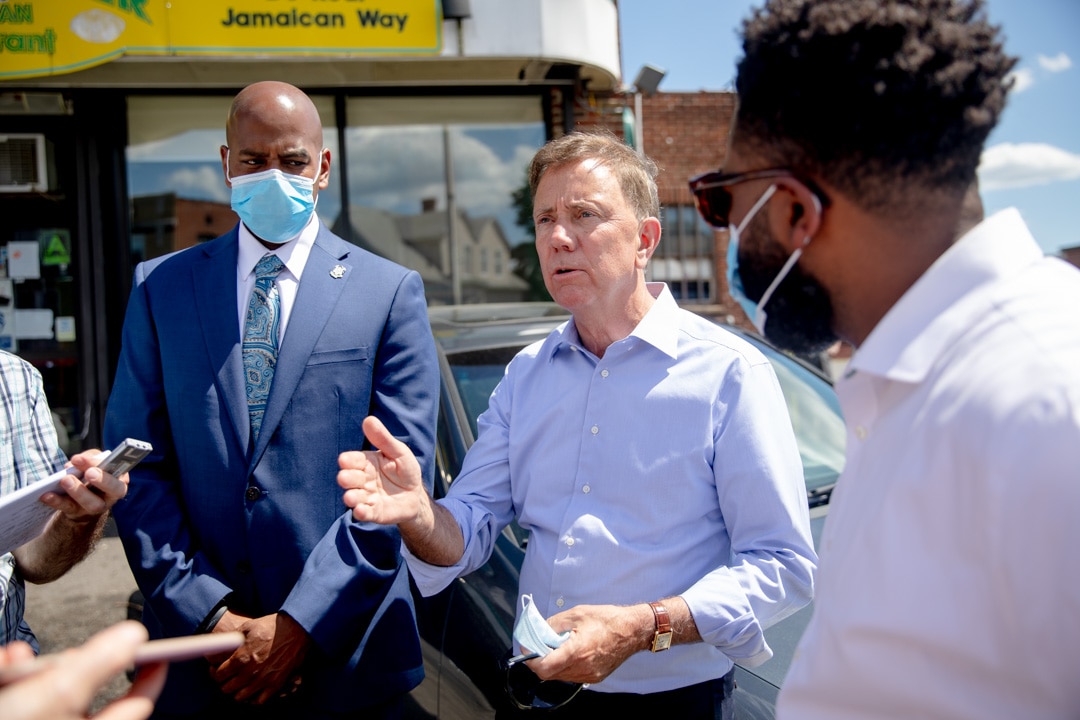 Legislative leaders and Gov. Ned Lamont still have a few more weeks to discuss the scope of their response. Leaders, who once hoped for a late June special session, now concede it won’t happen until after July 4 and possibly not until the week starting July 13.

Part of the reason for that delay involves preparations to bring 187 state lawmakers and hundreds of support staff back to the Capitol complex safely. For example, House leaders from both parties have agreed on a plan to allow lawmakers to follow debates from their individual workrooms in the Legislative Office Building. But not all the details have been ironed out.

There’s also the issue of money.

The pandemic left Lamont and legislators with a staggering budgetary challenge.

Connecticut’s emergency reserve will drop from $2.5 billion to $2.2 billion when this fiscal year wraps.

It’s whent he next one starts July 1, however, that the real pain begins.

The administration projects a staggering $2.7 billion gap, equal to more than 13% of the annual budget. Even if the rainy day fund is exhausted to close that hole, another $500 million remains to be solved with unpleasant choices like tax hikes, spending cuts, and borrowing.

And things get worse after that.

Analysts project the pandemic-induced recession will erode state revenues by more than $2 billion annually through 2023.

The Lamont administration has been warning legislators against making that fiscal nightmare even worse. In other words, don’t propose anything without a plan to pay for it.

“I think there’s a general consensus about what we want to accomplish,” Lamont said Tuesday, adding he expects the agenda to revolve solely around police accountability measures and revising election rules to make absentee ballots more readily available to coronavirus-wary voters this November. That last initiative also does not involve major costs for the state budget. 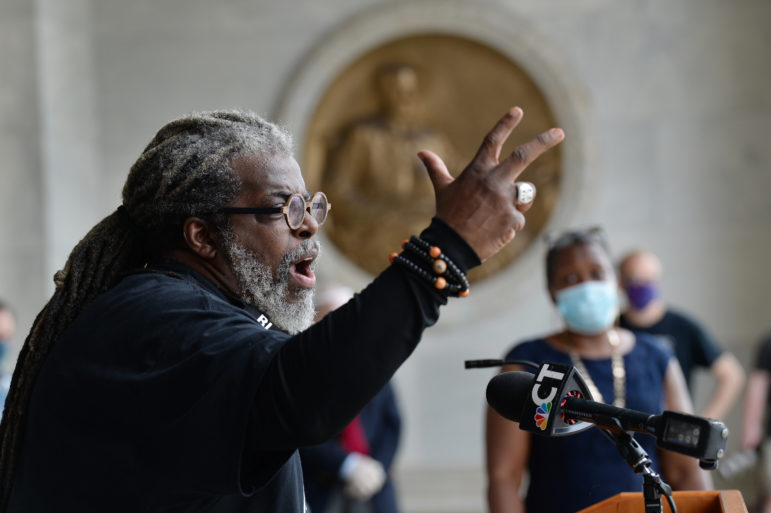 Bishop John Selders, co-founder of Moral Monday CT, seen here speaking to a large gathering of protestors at the state Capitol earlier this month, is one of a group of faith leaders in Connecticut who are fasting every day from sunrise to sundown until Gov. Lamont calls the legislature back into session to pass police reform.

The top Republican in the House, Minority Leader Themis Klarides of Derby, said “we’re addressing this in a bipartisan manner and we hope we come up with a bipartisan bill.”

The administration also isn’t alone in tracking the deficit.

“I think we’re all very clear in this state, regardless of party, that we’re in a very serious financial dilemma because of COVID,” Klarides said, adding the GOP is willing to revisit the budget — provided the exercise is about reducing deficits, not about adding to them or raising taxes.

“The first place to go should always be, how can we make government more lean?” she added. “The last thing is to take more money out of their pockets.”

House Majority Leader Matt Ritter, D-Hartford, expressed confidence Tuesday that Democrats would find common ground on a summer agenda, predicting that proposals that aren’t addressed now will be revisited in January when the regular 2021 session convenes.

“The exclusion of any item from an early July special session has nothing to do with the merits of the argument,” he said. “It simply is a matter of timing.”

Legislators hope to keep the July session to a few days to mitigate any health risk.

But Sen. Saud Anwar, D-South Windsor, another advocate for broader reforms, said the demand to close racial inequalities is strong now, and Connecticut should not squander the moment.

“Just having a legislative session around police is almost like using a Band-Aid for a bigger problem,” Anwar said, adding that accountability reforms are a worthwhile starting point.

But inequalities in “health care, housing, and economic opportunities — these are all interlinked,” he added. “If we lose this opportunity, are we going to go back to a time of apathy? In the midst of disaster, our realities have changed. We have to invest and rebuild.”