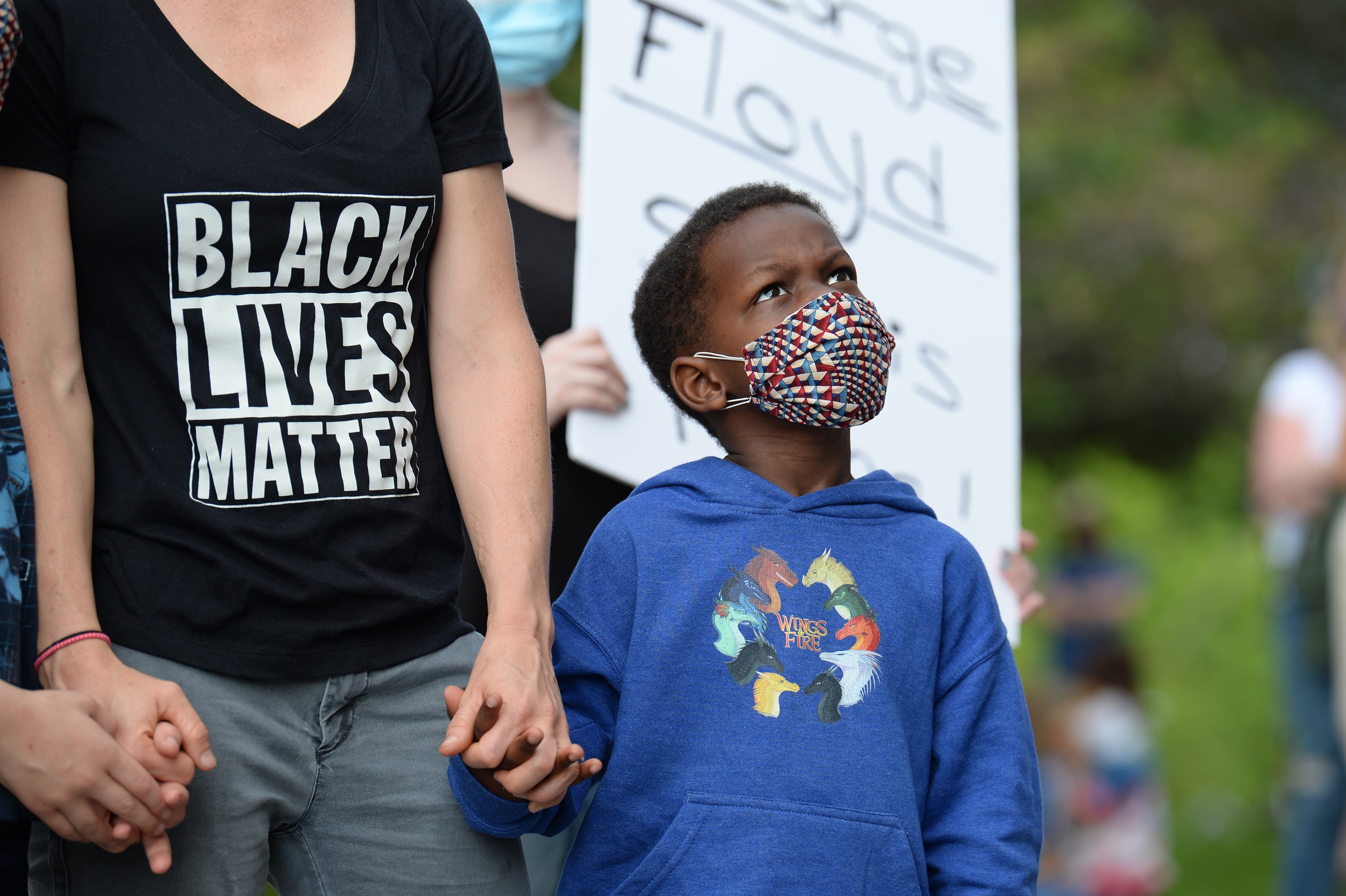 Daniel Sullivan, 4, hold his mother Hanna Sullivan’s hand while attending a rally at the state Capitol in May to protest the killing of George Floyd at the hands of police in Minneapolis on Memorial Day.

A new report from the Connecticut Juvenile Justice Alliance calls on state and city leaders to eliminate racial inequities in housing and unemployment and fund mental health support services. Such an investment, the report says, would address root causes of crime and ensure children living in under-resourced neighborhoods grow up to live healthy lives free from the confines of a prison cell.

The proposals aren’t necessarily new, but what stands out is who made them: young people whose lives have intersected with the juvenile or adult criminal justice systems.

The young people’s voices provided critical context needed to understand how current policies impact people’s lives, said Simone Davis, one of the alliance’s Justice Advisors. “Most politicians have no idea what that looks like.”

The alliance’s Justice Advisors led the study. For roughly two years, the advisors — young people between the ages of 18 and 25 who have been in the justice system or have justice-involved family members — led “vision sessions” with 150 youth and community members. They talked with young people and their families about the resources their communities need, the ways the juvenile justice system has helped or hurt them, the factors that propelled them or their peers into the justice system, and how people should be treated to ensure those who break the law are rehabilitated and those who are victimized are healed.

The report’s 10 recommendations echo the demands made by activists following the recent police killings of George Floyd and Breonna Taylor and go beyond criminal justice reforms. They seek to make life in Connecticut more equitable for those who live in marginalized communities under the theory that providing necessary resources will prevent young people from running afoul of the law, the report argues.

“The real question is why would you not put dollars into trying to avoid an issue rather than trying to solve it after it happens?” asked Iliana Pujols, the alliance’s director of community relations and the primary author of the report.

The most surprising aspect of the community conversations for Pujols was how much they reminded her of growing up in New Haven and how out of the ordinary they seemed to people who didn’t grow up in cities like Bridgeport, Hartford and Waterbury.

“I feel like these are things that happen on a Tuesday, Wednesday for me,” Pujols said. “This is stuff I’ve grown up around regularly, so it’s normal to me. Realizing it’s not really normalized to everyone else was shocking.”

The report is the basis for the Juvenile Justice Alliance’s “Invest in Me CT” campaign, an initiative dedicated to building communities where all young people and families can access the resources they need to succeed. Their calls to action are based on seven inequities commonly experienced by youth of color living in marginalized communities. These root causes lead to young people committing crimes and becoming involved in the justice system, the report says. These systemic issues include: economic and housing insecurity, a lack of hope, equal opportunity and trust in the system, a need for more credible messengers and positive role models, and trauma within communities.

One demand is familiar: remove all children from prison-like environments in the juvenile and adult justice systems. The Juvenile Justice Policy and Oversight Committee has been moving toward this for years. Reforms have shrunk the number of children incarcerated in adult prisons, and officials are trying offer secure treatment through community-based providers for children in the juvenile justice system, though their progress has been delayed.

Of particular concern is reducing persistent racial disparities in the justice system. State data shows justice reforms are helping white children more than they are benefitting children of color. The number of minors arrested each year has fallen, but the declines are greatest for white children. Incarceration begins with an arrest, the report notes, so it is important to reduce the contacts children of color have with the front end of the criminal justice system.

When justice advisors talked with young people about how to handle youth who have committed serious offenses, they suggested sending them to smaller facilities that offer individualized programs, stressing rehabilitation, not punishment. They recommended staffing the facilities with people who have similar life experiences, and creating a system based on positive reinforcement that allows them to gain privileges while teaching them how to hold themselves accountable.

“A lot of kids told us, ‘Nobody has ever asked me what I need to not come back,” Pujols said, noting that such a system would be more restorative than a place like Manson Youth Institution, which is currently under federal investigation. “The only positive thing I’ve heard [about Manson] is, ‘It’s so bad in there I’ll do anything not to come back.’”

Pujols said individualized programs with an emphasis on restorative justice would better serve children when they’re older. Many don’t consider how incarceration will affect them in the long term, she said — how it will make it harder for them to get an apartment or a job, how it will affect their adult lives.

Other suggestions in the report include funding community programs like after-school initiatives, holding police officers accountable for misconduct and training them to better assess community needs and creating a plan to address racial inequities in housing and employment.

The juvenile justice alliance’s study adds emotional depth to the many updates that state officials give on Connecticut’s justice reform efforts, Davis said.

“Seeing the data and the charts take away from some of that empathy that politicians might have for youth experiencing this.”