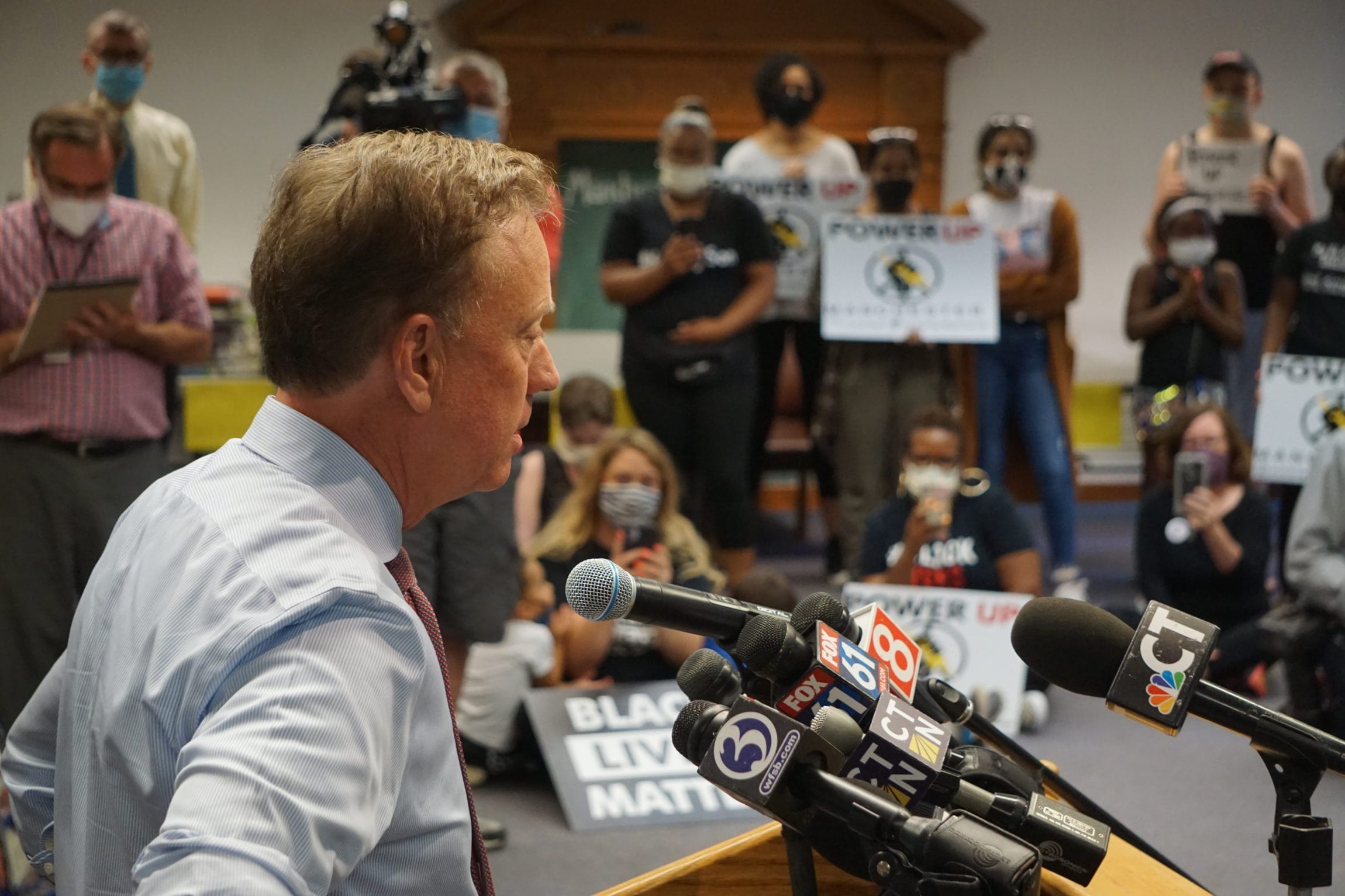 Gov. Ned Lamont: “There is such a small margin for error in COVID and in racism.”

Manchester —The mayor went first. The governor, lieutenant governor and the others waited their turn to condemn racism, America’s new ritual in the days and weeks since George Floyd breathed his last in the custody of police in Minneapolis.

But they were drawn here Wednesday not by police brutality in a far-off place, but by what local police say was an act of intimidation and bigotry directed by two white men against three young teens out for a late-night bike ride.

“We’re here to denounce the racial slurs, acts and hate crimes that have been happening not only in our community here but across the state,” began Jay Moran, a university athletic director who serves as Manchester’s part-time mayor.

Gov. Ned Lamont, whose second year in office has been consumed by fighting the COVID-19 pandemic, described racism in the same terms as the novel coronavirus: It is a contagion.

“There is such a small margin for error in COVID and in racism,” Lamont said. “And if we let that door swing ajar, it’s incredible how fast that infection can spread.”

His fight against COVID is going well, at least for the moment. Connecticut has the third highest per-capita rate of COVID-related fatalities after New Jersey and New York, but it currently has the third lowest infection rate after Alaska and Vermont.

On Wednesday, his administration reported that only 58 of the 11,448  tests returned in the past 24 hours were positive, an infection rate of just one half of 1% — the lowest to date. There were 2 more fatalities, bringing the death total to 4,324.

While there is nothing novel about the racism virus, Lamont conceded that it may be harder to contain. As did several lawmakers, Lamont assured the audience that a substantial police accountability bill will come to a vote in special session later this month.

Lamont and Lt. Gov. Susan Bysiewicz bemoaned what they say is the failure of President Donald J. Trump to stand up to racism, and to stand with Black Lives Matter.

The Depression-era library where the officials gathered is a quaint red-brick structure sheltered by towering shade trees on Main Street at the edge of Center Park. It is named for Mary Cheney, a philanthropist remembered on a plaque as “A Friend of the distressed and a comforting listener.”

Unlike many Connecticut suburbs, this one has long has been open to multi-family housing, much of it affordable. A consequence is a population of about 58,000 that’s become racially and economically diverse over the past 20 years, a source of civic pride and tension.

“We have a long way to go, but we’ve been more welcoming than most communities,” Moran said after the press conference. “I think the diversity is a treasure.” 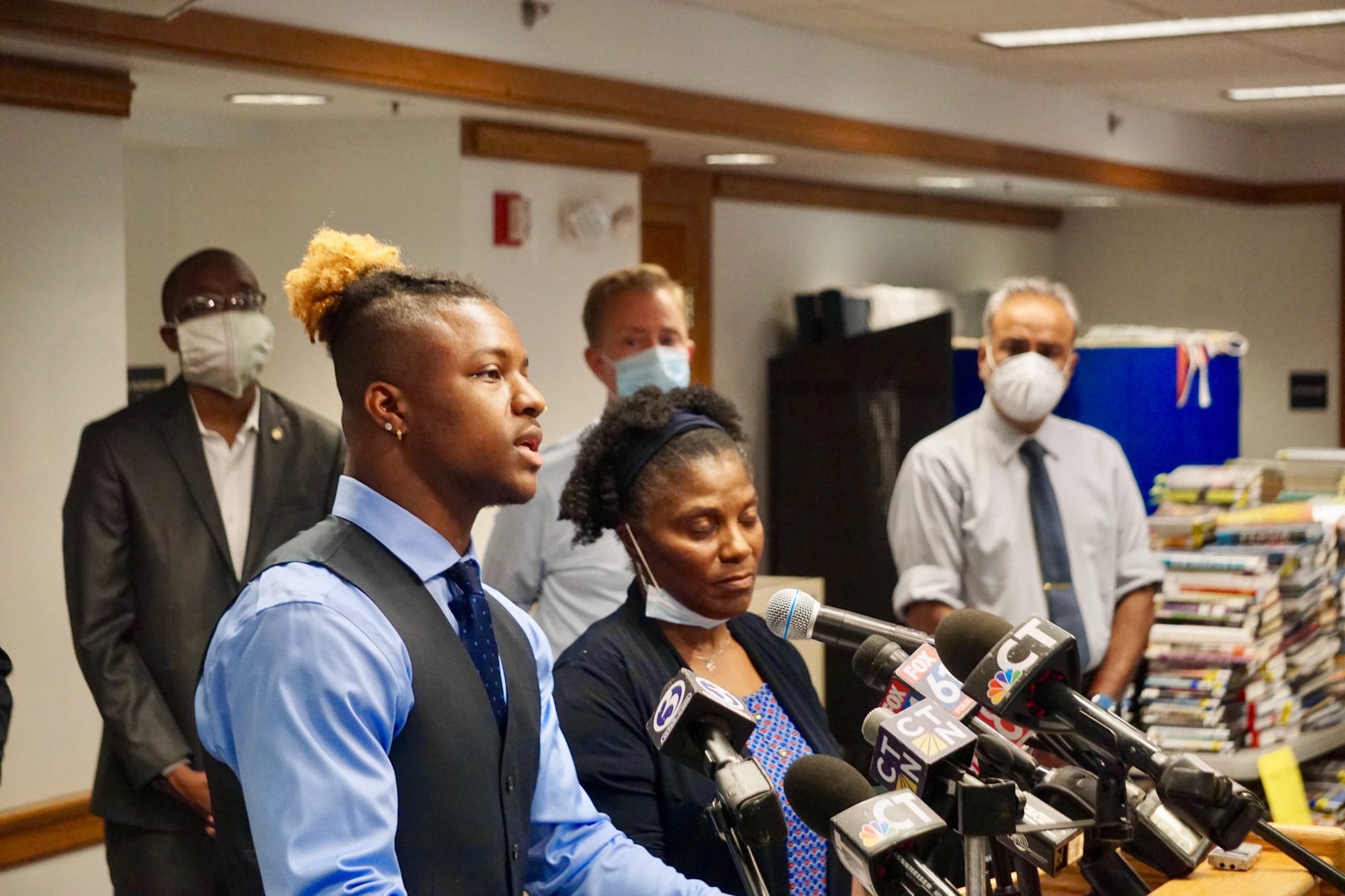 Pamela Floyd-Cranford, a local elected official, stepped to the microphone with her nephew, Rashad Conway. He said it was difficult to be a young black man in America — or in Manchester

But, for whatever reason, this east-of-the-river Hartford suburb has long struggled with race issues.

Legal aid lawyers joined by the U.S. Justice Department sued the community in 1979, alleging that a referendum ending the town’s participation in the federal Community Development Block Grant program was motivated by a desire to avoid fair-housing requirements.

U.S. District Court Judge M. Joseph Blumenfeld, widely seen as a liberal jurist, ruled in favor of Manchester after a six-week trial, concluding that the presence of some highly vocal and visible racists during the referendum campaign did not change one overwhelming fact — the community’s housing policies were hardly restrictive.

“Based on this evidence, this court is not prepared to charge the thousands of voters who favored a moratorium on participation with the racist motives of these few,” Blumenfeld wrote in a decision delivered on Oct. 12, 1981.

But the town also was rocked in the early ’80s by a firebomb attack on a Black family’s home. Manchester police arrested two young white men.

“When numbers began to increase, that’s when you saw more tension, that’s when we saw more over-policing in certain communities of Manchester,” said Pamela Floyd-Cranford, a Black member of the town’s council, known locally as the Board of Directors.

In April, local police and members of a regional special tactics team shot and killed 27-year-old Jose Soto, who barricaded himself in his mother’s house when police tried to arrest him for a parole violation.

He threatened to shoot as he left the house, but no weapon was found. His family said he had suffered from mental illness.

Moran and others recently wrote to the chief state’s attorney’s office, saying they had no confidence in the prosecutor now assigned to review the police shooting. 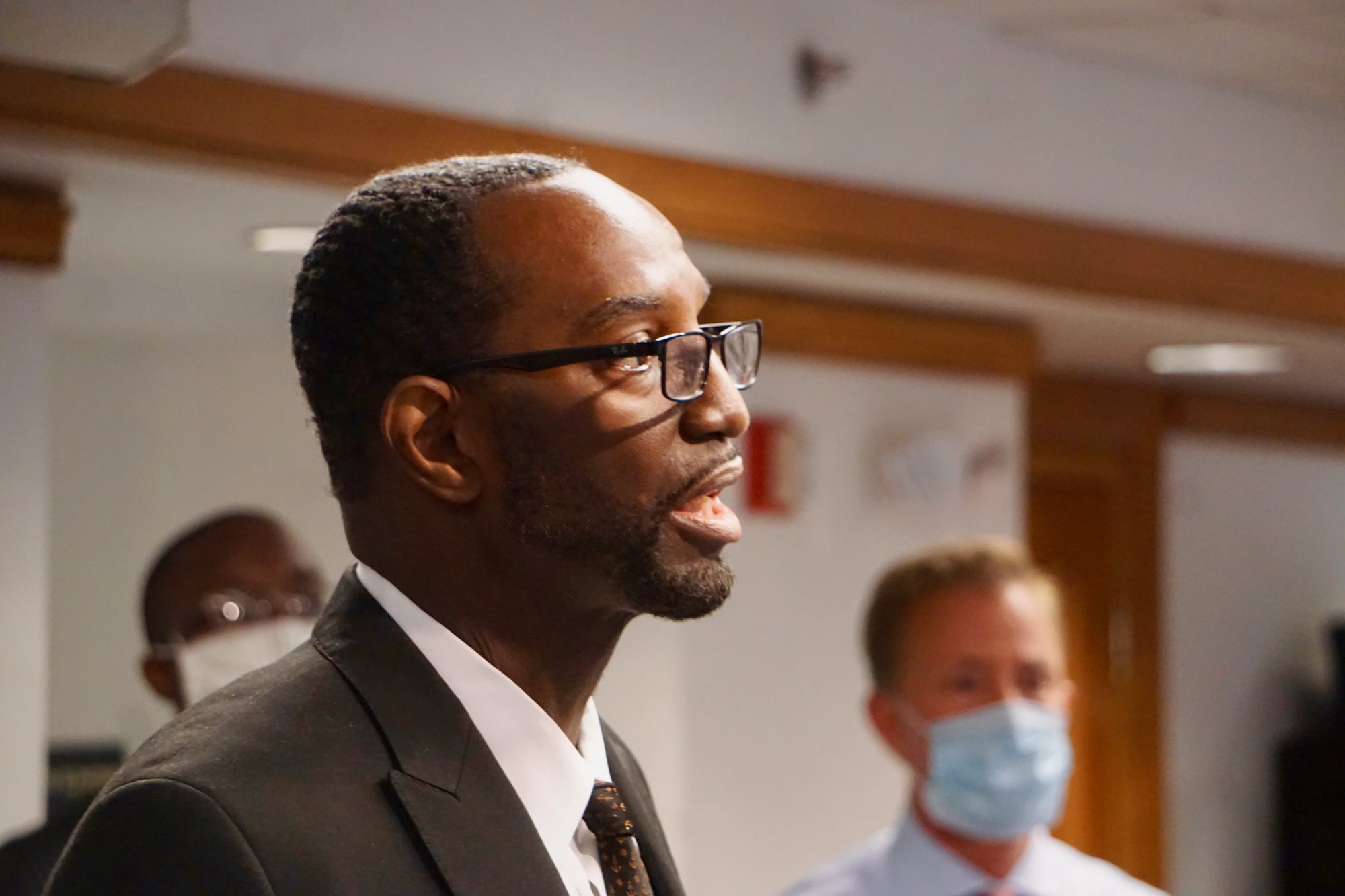 Darryl Thames, chair of the Manchester Board of Education.

Darryl Thames, the chairman of the Board of Education, said the outrage over Floyd’s death and other incidents of brutality or racism have created a moment that elected officials cannot squander.

Sen. Saud Anwar, D-South Windsor, the co-chair of the legislature’s Housing Committee, said he and others expect to make public a housing desegregation proposal next week, though there is no guarantee it will come up in special session.

Thames said every elected official should feel the pressure to act.

“Now is time for change. Now is the time to be steadfast, the time to be bold, the time to demand changes from those in places of power,” Thames said. “This is that time. We have to hold our elected officials accountable, like myself, to do what is right for this community and for this greater community in the state of Connecticut — in fact, for the entire world.”