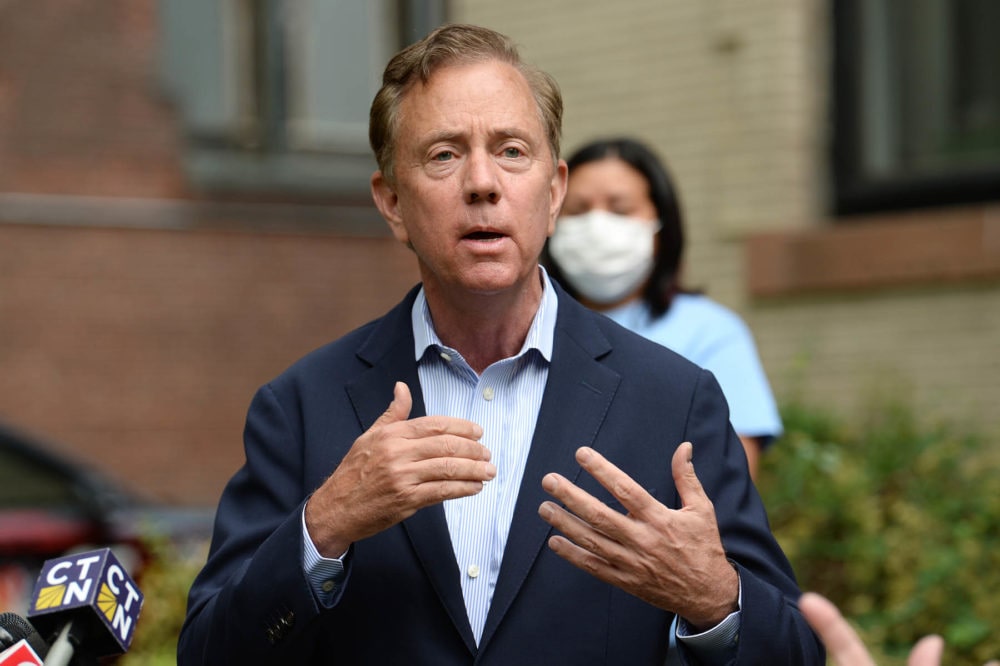 Gov. Ned Lamont shut the door Thursday on a full-scale reopening of Connecticut bars in mid-July, though he said a formal announcement won’t come until next week.

“I’m sorry to disappoint you, but I think the bars are going to have to take a pause right now,” Lamont told reporters during a daily briefing  at Hammonasset Beach State Park in Madison. “I’m just looking around at the rest of the country.”

The governor, whose already ordered visitors from 16 other states to self-quarantine for two weeks upon arriving in Connecticut, noted that Texas Florida and California — three states with rapidly escalating COVID-19 infection rates — have closed bars in many areas. “I’m learning from that,” he said.

For the past two weeks, Connecticut restaurants and bars licensed to serve food have been allowed to serve customers indoors, including alcoholic beverages, with several restrictions.

Indoor capacity must be limited to 50%, with parties spaced at least six feet apart and guests wearing masks when not eating and drinking.

Parties can be seated at bar counter provided they are:

Scott Dolch, executive director of the Connecticut Restaurant Association, said many small bars serve little or no food, and were counting on being able to serve patrons just seeking alcohol drinks in mid-July.

There also have been discussions between the association and the Lamont administration about removing the plastic shielding requirement, though no decision had been reached.

Dolch said he remains hopeful that talks between the association and the governor’s staff will continue.

“Let’s go back and revisit where we are currently and where we’re trying to get,” Dolch said, adding that Connecticut bar owners understand they must be diligent in enforcing any public health standards tied to a broader reopening. “It’s not only about metrics. It’s also about following the rules.”

We’re open because of each and every one of you doing the right thing.”— Gov. Ned Lamont

The governor hinted on June 29 that he was considering scaling back Phase 3 of Connecticut’s economic reopening from the pandemic, and specifically reassessing bars.

Besides reopening bars and amusement parks in mid-July, the administration’s plan currently calls for limits on indoor gatherings to grow in about two weeks from 25 people to 50. The limit on outdoor gatherings would jump from 100 to 250.

Lamont continued to stress that Connecticut, and several of its neighboring states in the Northeast, have made great progress in stemming coronavirus spread through social distancing and other public health measures.

“We’re open because of each and every one of you doing the right thing,” Lamont said, referring to the more than 140 state beaches, parks and forests that are open for the Fourth of July weekend.

For seven consecutive days, fewer than 1% of Connecticut residents tested for the virus have been found to be positive, he said.

“Don’t take that for granted because you’ve seen what’s going on around the rest of the country,” Lamont added. “You see how that can change fast. But also you can see the benefits of paying attention.”

The administration released data Thursday evening that shows an additional 74 people tested positive for COVID-19 in the past 24 hours, for a total of 46,646 cases since the pandemic began. Two more people have died, bringing the total number of deaths to 4,326, while only one person was hospitalized in the same time period.

New statistics regarding the pandemic’s impact on nursing homes released Thursday evening by the Lamont administration showed one nursing home worker died from COVID-19 during the last reporting period, which ran from June 24 through June 30. That involved an unidentified staffer at Salmon Brook Rehabilitation & Nursing Center in Glastonbury. An administrator for the facility could not be reached for comment late Thursday.

The report also showed 42 staffers spread among more than 210 Connecticut nursing homes were confirmed positive with COVID-19 between June 24 and 30, down from 64 during the previous reporting period.

While Connecticut’s numbers remain low, surging caseloads in large states in the southern and western U.S. have dominated headlines over the past week. But on Monday Lamont also acknowledged the spread is creeping closer to Connecticut, with rising infections in Ohio and other Rust Belt states.

But new data from the Johns Hopkins University Coronavirus Resource Center shows several key states have begun to trend in the wrong direction.

The rolling, three-day average for new infections in Ohio was 381 on June 13, and had more than doubled to 886 by June 27. In Pennsylvania, new infections jumped from 452 to 574 over the same period. In Michigan — which connects quickly to upper New York State via Canada — infections rose from 202 new daily to 319 during those two weeks.

Also Thursday, Lamont and other administration officials warned people not to relax social distancing and other public health safeguards when celebrating the long holiday weekend.

Department of Energy and Environmental Protection Commissioner Katie Dykes said most state beaches, parks and forests are expected to reach capacity this weekend.

Potential visitors are urged to check the state’s website before going, she said, adding a new webpage has been created to provide updates when beaches and parks have reached capacity and can’t accept more visitors.

Those who are able to attend must wear masks, maintain a six-foot distance from others when walking, and keep 15 feet apart from other parties when setting up a towel or blanket at beaches, Dykes said.

Swimming is not available at most inland parks, in large part because the ponds or lakes involved with those sites often feature beach areas that are too small to allow sufficient distancing between guests, she added.

Those attending municipal fireworks shows also are expected to remaining 15 feet apart from other parties in attendance, she said.

In other state news Thursday, the League of Women Voters, the Connecticut chapter of the NAACP and others filed a lawsuit against the state to make mail-in balloting available to all state voters during the coronavirus pandemic.

“The Black Community has been hit the hardest in the state by COVID-19 by devastating our people’s health and finances, and now it seems we will be hit the hardest politically in the state of Connecticut if there are not protections put in place for voting rights in November,” said Scot X. Esdaile, president of the Connecticut NAACP State Conference. “We need to do everything possible to prevent a huge political catastrophe in November, and that means making sure people are able to vote in a safe manner.”

“COVID-19 remains a threat and it is critical that our fall elections are carried out in a way that assures voters and election workers can participate safely,” said Carol Reimers, president of the League of Women Voters of Connecticut.

Other entities represented in the lawsuit include the American Civil Liberties Union, the ACLU of Connecticut and an unnamed individual voter in Connecticut whose work places her at greater risk of harm from COVID-19, according to a statement from the plaintiffs.

Many states allow voters to cast an absentee ballot, but Connecticut requires voters to provide a reason for doing so.

Secretary of the State Denise Merrill expanded access to absentee ballots for the August primaries in accordance with an executive order from Lamont but has not done so to date for the general election in November.

Merrill has said her office cannot unilaterally change voting laws in Connecticut and has called for the General Assembly to provide greater absentee ballot flexibility for the November election.

“No Connecticut voter should be forced to choose between protecting their health and casting their ballot,” Merrill said. “As I have said for months, the legislature should come in to special session immediately to allow Connecticut voters to cast their votes by absentee ballot in November.”

Merrill added that “All legal arguments aside, I am focused on ensuring that all Connecticut voters are able to vote safely by the method of their choice.”

Many voters rely on nonpartisan elections information provided by the league, Reimers said, adding that “we need to be able to distribute to voters accurate information well in advance of elections, including information about absentee voting by mail.”