Connecticut one of 17 states to sue to protect foreign students 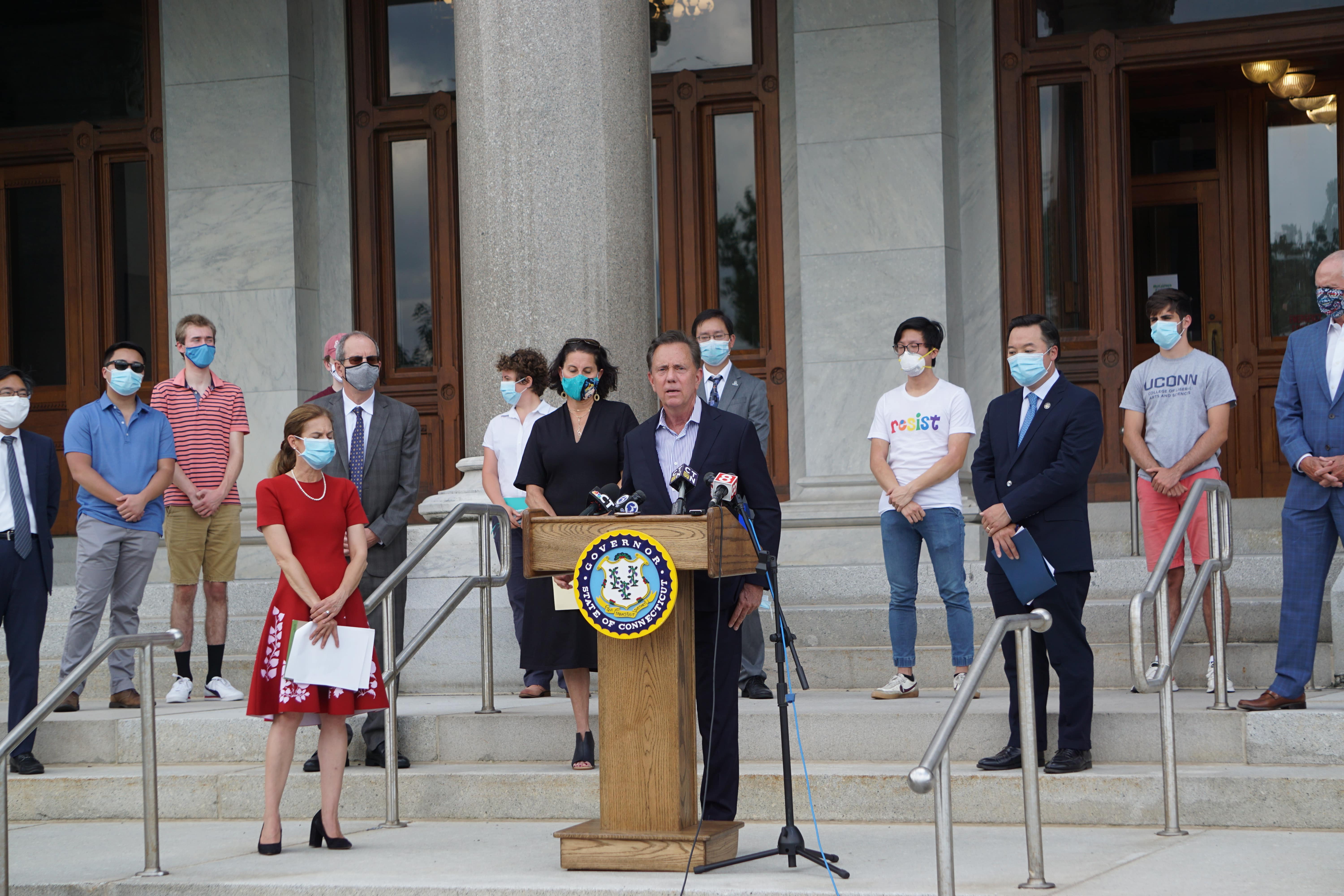 The Trump administration’s abrupt decision to bar foreign students from the U.S. if their courses are taught online as a COVID-19 precaution this fall was called “senseless and cruel” in a lawsuit filed Monday by a coalition of states that includes Connecticut.

The lawsuit comes as President Donald J. Trump is pressuring primary and secondary schools to open their classes, despite a spike in cases nationally that is complicating efforts by Connecticut and other states with low infection rates to maintain their aggressive testing.

Quest Diagnostics, the commercial laboratory that performs a majority of COVID-19 tests in Connecticut, is experiencing delays in producing results across the U.S., and the state’s epidemiologist, Matthew Cartter, said he is anticipating an eventual shortage of testing materials that could limit testing here.

“It is clear there are strains on the supply chain for test kits and test reagents that are going to affect the entire country,” Cartter said.

The testing delays have been relatively minimal in Connecticut so far, due a contract that requires Quest to keeps the state’s samples in a priority tier of tests, said Josh Geballe, the state’s chief operating officer.

Unclear Monday was whether any delay in results, couple with the prospect of fewer tests, eventually would compromise the accuracy of what has been a key measure of how the state is faring against COVID: The rolling seven-day average of positive tests.

Connecticut, which has ceased publishing test results over weekends, posted numbers Monday for the past three days: 223 laboratory-confirmed infections among 31,101 new tests, a positive rate of seven-tenths of one percent.

The Centers for Disease Control and Prevention has set anything under 5% as acceptable. Nationally, nearly 9% of all tests in the week ending July 4 found infections, with double that rate in some places.

Connecticut reported 23 additional COVID-related deaths, but 17 of the fatalities occurred over a period of weeks and only now were recorded. Hospitalizations for COVID remained low, falling by 3 to 74.

Infection rates and hospitalizations have been the metrics on which Lamont has relied in judging the easing of COVID-related restrictions. The major decision now before the governor is one he shares with local school districts: Setting the conditions for reopening schools that he ordered closed in March.

Fran Rabinowitz, the executive director of the Connecticut Association of Public School Superintendents, said the state will need to make a decision in early August about whether it is safe for schools to reopen for all students so parents and school systems can adapt.

Rabinowitz, a former school superintendent, and Cartter participated in a virtual press briefing Monday with Lamont. The state has released an outline for reopening the schools, but the details are being finalized in consultation with the superintendents.

“We’re hoping to bring back all of the children, because we know, as everyone knows, there is nothing more effective than having the children in their classes with their teachers,” Rabinowitz said. “So, we’re watching the science very carefully.”

She cautioned that if infection rates tick upward, they may need to shift to a “hybrid,” a mix of online and classroom instruction. To limit exposure under a hybrid, students will go to schools in shifts.

Connecticut among the states to sue Trump over foreign students

As the state focuses on primary education, colleges and universities are fighting with the Trump administration over whether it is safe to resume in-person education —and the impact on foreign students if universities continue a reliance on on-line learning.

Seventeen states — all with Democratic attorneys general — and the District of Columbia sued Trump in U.S. District Court in Boston on Monday, asking a federal judge to block a decision by Immigration and Custom Enforcement that could result in the mass deportation of foreign students. The suit mirrors one filed by Harvard and MIT and will be the subject of a hearing Tuesday.

Immigration and Custom Enforcement had waived the requirement that foreign students take in-person courses as a condition of their visas last spring, but it reversed course on July 6 and gave schools nine days to advise the government if they intended to offer only remote courses this fall.

Students and officials from UConn, Yale, Wesleyan and the Connecticut State Colleges and University system said the order could affect thousands of students, interrupt research, deprive the schools of significant tuition income and dampen the state economy.

“It is nothing less than an attack on Connecticut, our institutions of higher education and on students and on teachers and on staff and administrators,” said Attorney General William Tong.

Lt. Gov. Susan Bysiewicz said the administration’s stated goals is protecting U.S. jobs, but it will only add to economic pain caused by the COVID-19 pandemic in Connecticut and throughout the U.S.

Ten thousand foreign students study in Connecticut, and Bysiewicz cited a study by the Center for the New American Economy that concluded in 2015 they supported about 4,000 jobs and contributed $397 million to the economy.

About 15% of students at Wesleyan and 13% at UConn are foreign, enriching the academic experience and providing a significant source of income at a time when the number of college-age students is shrinking

“We have international students who are directly involved in medical research. They are directly working on cures and treatment for COVID-19,” Chun said.

Lamont, who endorsed Connecticut’s participation in the litigation against Trump, said about 18% of Connecticut businesses are run by foreign-born executives, and the state long has been the beneficiary of foreign students who study in the state and then remain to create jobs. 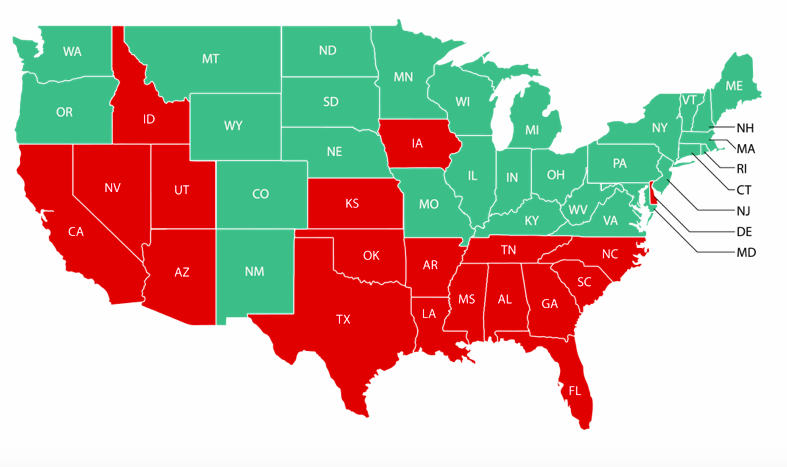 The states marked in red are COVID hotspots, and their residents are discourage from visiting here.

A new way of looking at COVID

The state’s percentage of new cases has nowhere to go but up, as epidemiologists do not expect the coronavirus to disappear anytime soon. Cartter said epidemiologists no longer view the novel coronavirus as behaving like influenza, causing a disease that comes in waves.

“It turned out the influenza model was not the right one. It was the only one we had, however, to judge by,” Cartter said. “It may well be we have some ongoing transmission all through the year.”

The question is whether the state can continue to keep new infections low by requiring social distancing and masks.

“This is not the time to relax at all,” he said.

Cartter said the surge of cases in many areas outside the northeast mostly likely are not “distinct waves.”

Without offering specifics, Lamont said Monday that Connecticut will join New York and New Jersey is devising a “certification” process for visitors coming from 19 states that are now considered COVID hotspots under a tri-state travel advisory.

Those are states with a new daily positive test rate higher than 10 per 100,000 residents or a 10% or higher positivity rate over a 7-day rolling average.

Connecticut advises a 14-day self-quarantine for visitors from any of those states.