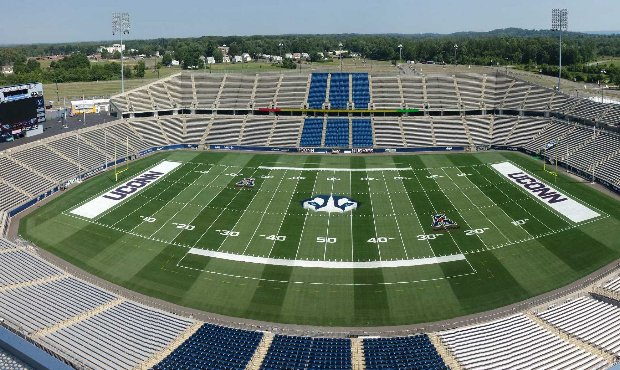 Among the many items funded at Tuesday's meeting was $725,000 for maintenance projects at UConn's Rentschler Field in East Hartford.

But while Gov. Ned Lamont hailed the funding as a vital infusion into Connecticut’s construction economy, a House Republican leader again charged the state with overspending despite eroding revenues and dangerously high unemployment.

“This is a really good time to be doing upgrades and rebuilding” Lamont, who chairs the 10-member bond commission, said, adding “it’s not something you can pull back upon” just because of the coronavirus pandemic.

About 80% of the financing approved Tuesday — about $420 million out of $550 million — is focused on education and transportation projects, two major priorities, the Democratic governor said. And with the pandemic curtailing highway and rail travel, transportation projects are progressing with particular efficiency at this time, Lamont added.

State Rep. Christopher Davis: Some items “perhaps are not necessary.”

Rep. Christopher Davis of Ellington, one of just two Republicans on the bond commission, countered that the state’s borrowing program is more at risk than administration officials want to acknowledge.

Connecticut spends billions of dollars annually on capital projects by selling bonds on Wall Street. When tax receipts and other revenues shrink, so does the amount of borrowing on new capital projects the legislature can authorize.

Though required by law to approve a new revenue schedule annually before July 1, the legislature didn’t do so this year, ending business in mid-March because of the coronavirus. Since then, analysts warned, revenues for this new fiscal year are likely to be down about $2 billion.

Were legislators to adopt a revenue schedule based on an April 30 forecast from state analysts, they and Lamont would need to suspend about $2.2 billion in planned projects.

The Democrat-controlled legislature is due back to the Capitol later this week for a special session to address election and police accountability issues, but they don’t plan to approve a new revenue schedule — and thereby tighten the borrowing limit — at this time.

But Davis questioned whether even the April 30 forecast is still reliable.

More than 700,000 unemployment claims have been filed with the state Department of Labor since mid-March, and many of those came after April 30.

Also since that time, projections for the national economic output have worsened.

Lamont insisted that when legislators set a new revenue schedule, his administration is prepared to help identify new projects that could be deferred. Also, the State Bond Commission doesn’t authorize new projects, but rather it allocates borrowed dollars to projects established by the legislature.

Lamont’s deputy budget director, Kosta Diamantis, noted that the current administration has allocated borrowed dollars to capital projects equal to just 60% of the amount spent between 2011 and 2018 during Gov. Dannel P. Malloy’s administration.

Still, Davis questioned whether Lamont is being as lean with Connecticut’s credit card as he could be.

Though most of the funding was focused on major programs, the bond commission agenda also includes about $15 million in smaller projects — park upgrades, new sidewalk and streetscapes, senior center repairs, museum and cultural center improvements — in urban communities represented by the legislature’s Democratic majority.

“Some of the items on this agenda … perhaps are not necessary at this time when we’re facing fiscal peril,” said Davis, who cast the long dissenting vote against many of these items.