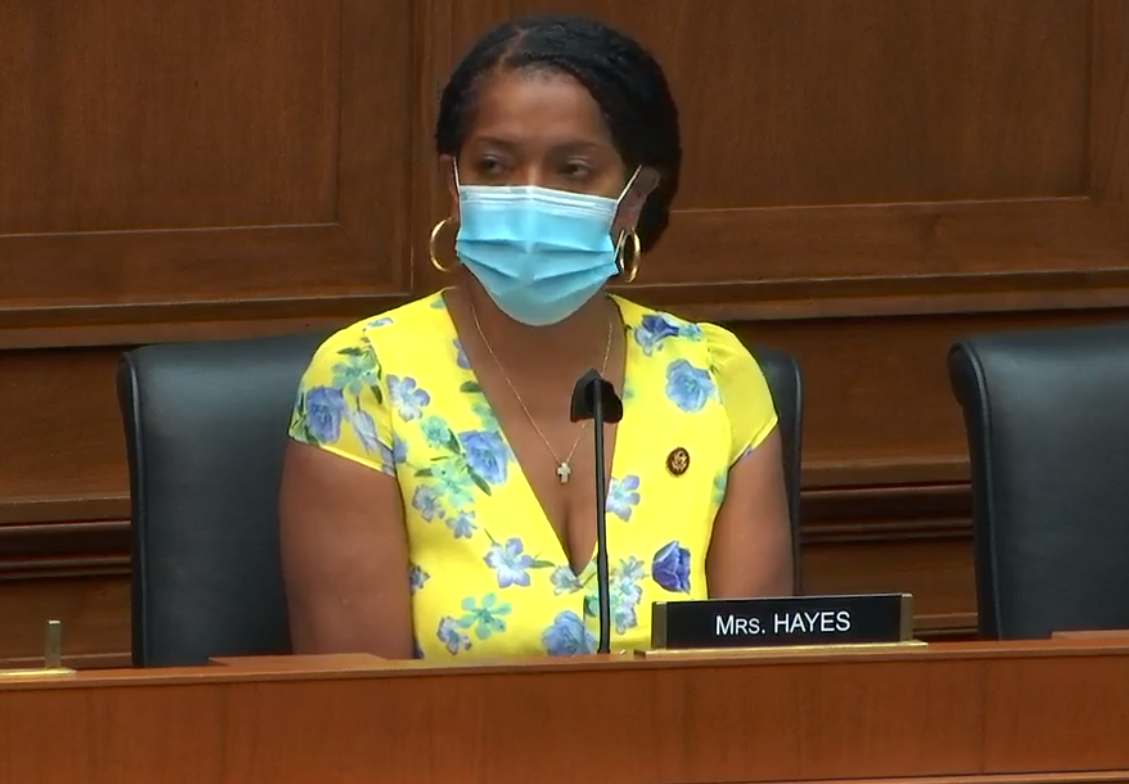 Rep. Jahana Hayes is pressing for a coronavirus testing plan — and more federal money to schools — before classes start in the fall.

Washington – Congress on Thursday tried to tackle how the nation could safely re-open schools this fall, or even if they should re-open, with clear partisan differences on how children should be educated during the coronavirus pandemic.

Democrats on the House Education and Labor Committee  that held the hearing on school reopening, including  Rep. Jahana Hayes, D-5th District and Joe Courtney, D-2nd District, pushed back on Republican proposals to maximize in-person teaching. Although he’s a Democrat, Gov. Ned Lamont has indicated that’s his preference, too.

“Nobody has said that we can do that safely,” Hayes said of in-person education.

Many of the nation’s largest school districts have announced they’ll be entirely virtual in the fall or use a hybrid model that has children in classrooms only a couple of days a week.

A poll released this week by the Associated Press and the NORC Center for Public Affairs found most Americans think mask requirements and other safety measures are necessary to restart in-person instruction, and roughly 3 in 10 said teaching kids in classrooms shouldn’t happen at all.

President Donald Trump, however has claimed to have wide support for a full reopening, saying  Democrats oppose it for political reasons.

Republicans at Thursday’s hearing argued that children need to be back in the classroom to receive the best education and to benefit from free and reduced-priced meals offered to low -income students.  “And if children don’t return to school, parents can’t return to work,” said Rep. Rick Allen, R-Ga.

The hearing was also a forum on the importance of more federal aid to financially strapped school districts struggling to come up with safe ways to teach K-12 students during a pandemic that is growing in strength.

On Thursday, Senate Republicans proposed providing another $70 billion in new funding for elementary and secondary schools. Half would be distributed on a per-capita basis, while the rest will be awarded to schools that reopen this fall.

Democrats say at least $200 billion more is needed in the next stimulus bill that’s under discussion in Congress right now.  And Hayes has said at least $300 billion is needed to help schools reopen safely.

Some witnesses were supportive of in-person instruction.

“Being away from peers, teachers and school services has lasting effects for children,” testified Dr. Sean O’Leary, the vice chair of the committee on infectious diseases at the American Academy of Pediatrics.

“Our association understands that the reopening of our nation’s preK-12 schools during the COVID-19 pandemic is vital to ensure the continuity of education. However it should not outweigh the safety and the mental and physical health of our students, educators, staff and families,” said Leslie Boggs, president of the national PTA.

Hayes said she is concerned that none of the schools in her northwest Connecticut district included testing in their plans for the next term and asked O’Leary to weigh in.

He replied that testing in schools is  a “very complicated issue” and that testing children who don’t have COVID-19 symptoms “doesn’t appear to be a good approach” because a child could test negative one day and contract the virus at a later date.

“I understand we can’t do a universal testing plan,” Hayes said. But the lawmaker, a former national Teacher of the Year and high school history teacher, said there should be a “good plan for testing” before schools reopen.

Last month, Lamont and  Connecticut Commissioner of Education Miguel Cardona released a plan calling on school districts to prepare for in-class instruction five days a week. It did not include a testing requirement.

The governor has indicated he might back way from his push for in-person education if coronavirus  infections, currently very low in the state, trend upward. 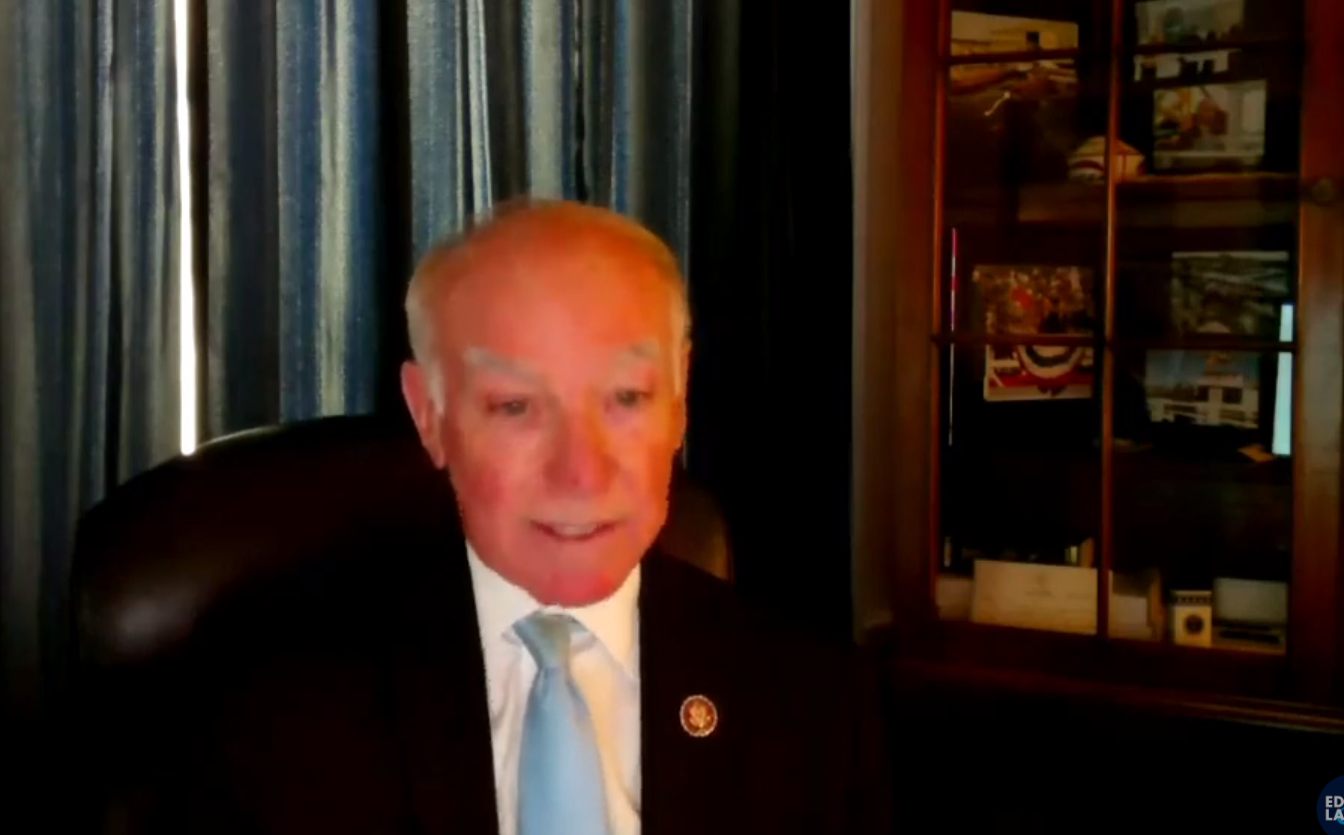 Joining the hearing remotely, Rep. Joe Courtney was among the Democrats who say they are concerned about the safety of in-person instruction.

Courtney said reopening plans should take in broader considerations than local infection rates.  “You have deal with the overall of what’s going on with a country or a region,” he said.

Courtney cited Israel as an example of what could happen if schools reopen too soon.

With infection rates down, Israel reopened schools in May. Now Israeli public-health officials are blaming that decision for helping fuel a large new wave of coronavirus infections that has prompted authorities to shut down sections of the nation’s economy  again.

“We all want schools to reopen, but let’s get a baseline of science,” Courtney said.

Democrats also decried what they said is a lack of federal guidance on school reopening.

The White House blocked officials from the Centers for Disease Control and Prevention from testifying at Thursday’s hearing. The CDC says it won’t release any more guidance for reopening schools until later this month.