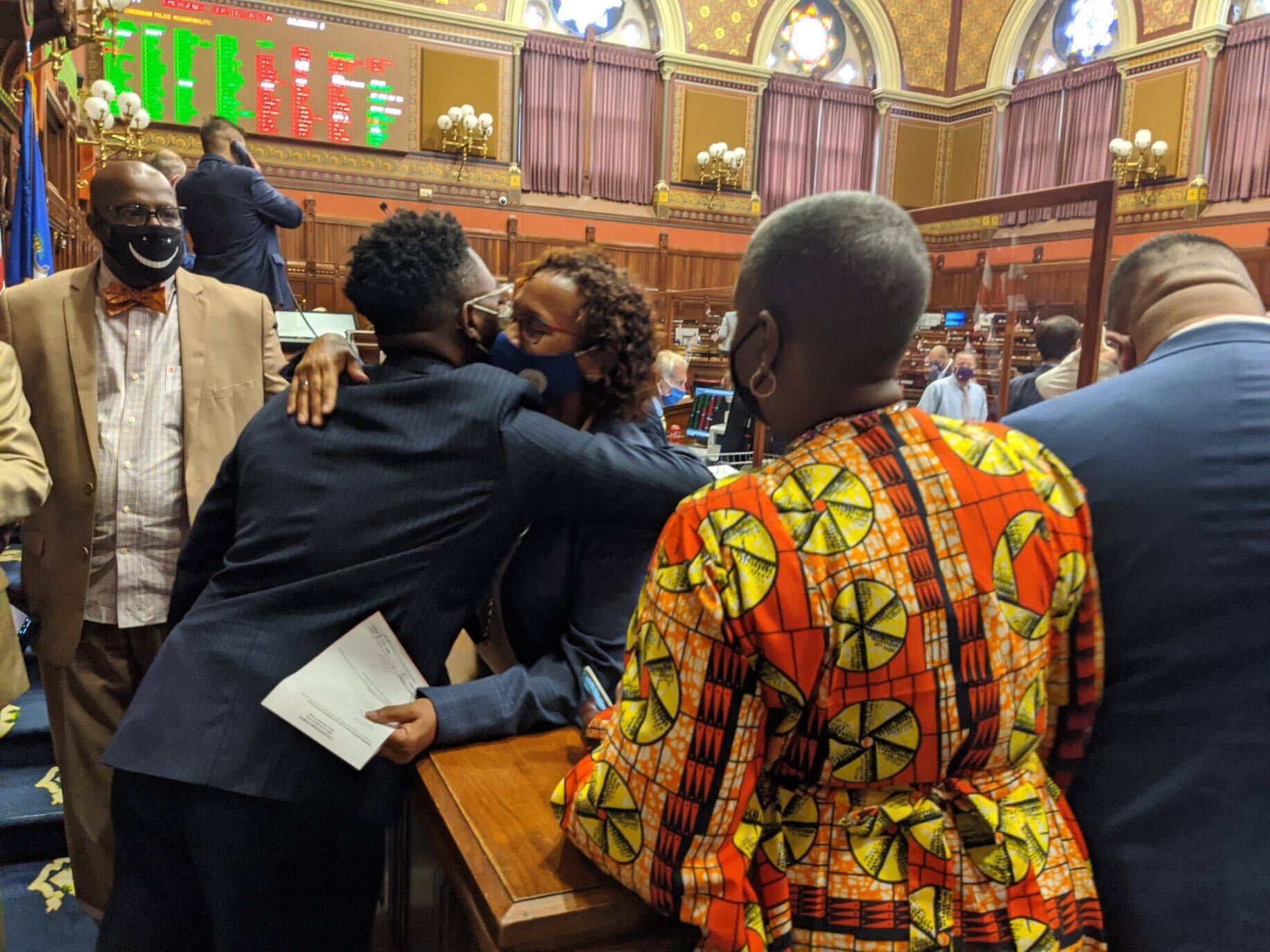 Surrounded by other members of the Black and Puerto Rican Caucus, Reps. Brandon McGee and Toni Walker embrace after it was clear the police reform bill would pass.

The state House of Representatives voted in special session Friday morning to pass an ambitious proposal to reframe the training, oversight and accountability of a police profession under intense scrutiny in Connecticut and across the U.S. since a police officer killed George Floyd two months ago in Minneapolis.

After beginning an overnight debate at 1:19 a.m., the House staggered towards the finish line at 9 a.m. with the Democratic majority managing to maintain a fragile consensus. The measure passed on nearly a party-line vote of 86-58, with Republicans opposed to a provision limiting the qualified immunity now enjoyed by police.

The Black and Puerto Rican Caucus successfully defended the provision, telling colleagues that it was an essential element of making police accountable.

“There is no justice when there is no accountability,” said Rep. Pat Wilson Pheanious, D-Ashford, the former state commissioner of social services.

The House immediately adjourned its special session after passage, leaving the Senate with a take-it-or-leave-it proposition when it convenes Tuesday. The House adjournment means any Senate revisions would kill the bill.

With Republican opposition hardening and some Democratic support teetering, the measure’s backers worked Thursday and Friday to reclaim a narrative that had shifted away from the need to protect communities of color from police bias to Republican assertions that the bill would endanger police officers and expose them to frivolous litigation.

“The bill before us is not anti-cop,” said Rep. Steve Stafstrom, D-Bridgeport, who explained the bill to the House as the co-chair of the Judiciary Committee. “We understand that change is hard, but oftentimes, change is also necessary.”

A Republican amendment that would have stripped the bill of language limiting the qualified immunity against litigation failed on a rare tie vote, 72-72. The loss complicated chances for passage, since striking the language would have guaranteed passage by a lopsided vote.

“Unfortunately, this became an issue of picking sides,” said House Minority Leader Themis Klarides, R-Derby. “This became an issue of, you were either pro-police, or pro-minority, or pro-fairness or pro-whatever we want to call it. Not only can that not be the case, it must not be the case. We cannot fix problems in this state of this magnitude without doing it together.”

Black lawmakers were shut out of the first three hours of the debate as Rep. Rosa Rebimbas, R-Naugatuck, the ranking Republican on Judiciary, quizzed Stafstrom in grinding detail about legislation drafted after extensive discussions by Stafstrom, Rebimbas and their Senate counterparts.

Rebimbas challenged Stafstrom on a key provision that would standardize training for police, requiring all courses to adhere to the standards set by POST, the Police Officer Standards and Training Council. POST would have the the power to revoke a police officer’s certification, effectively barring them from the profession. 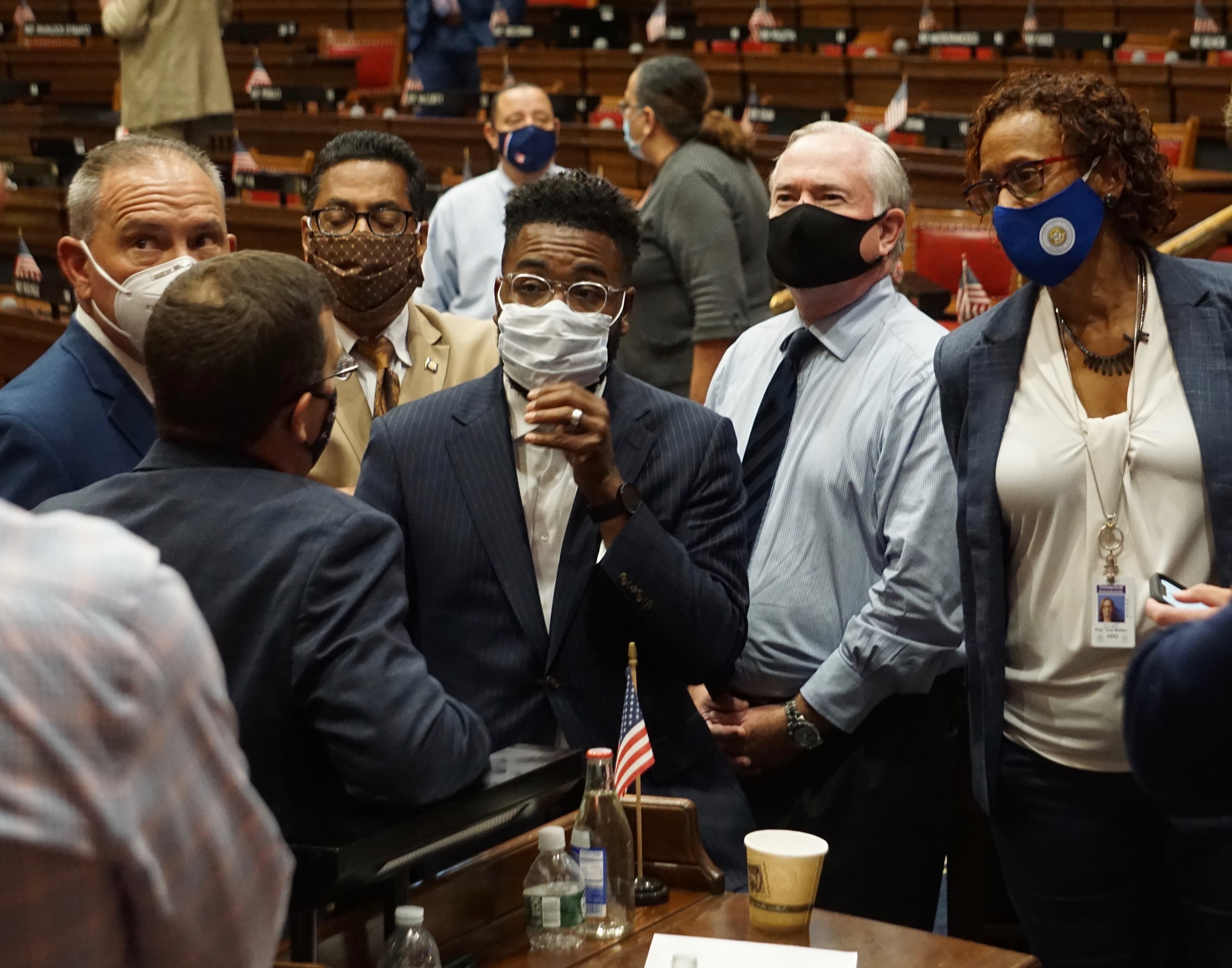 Rep. Brandon McGee, center, the leader of the Black and Puerto Rican Caucus, scans the voting tally board. At left is House Speaker Joe Aresimowicz.

Rebimbas, the only Republican to speak in the first five hours of the debate, said the bill was empowering POST without legislators first determining if the POST standards were superior.

“We don’t know this information, but yet we’re making a major shift decision to tell them, ‘You now need to be certified through POST.’ Can’t tell you whether or not the training is better, different, because we don’t know,” Rebimbas said.

The GOP strategy shifted after 4 a.m., when Rebimbas proposed the amendment to strip the 46-section bill of two sections that would have changed the qualified immunity enjoyed by police officers. It opened the door to comments by members of the legislature’s Black and Puerto Rican Caucus. They insisted that good cops had nothing to fear.

Rep. Anthony Nolan, D-New London, a police officer in New London, said fellow officers have pressured him to vote with them, not the Black and Puerto Rican Caucus. 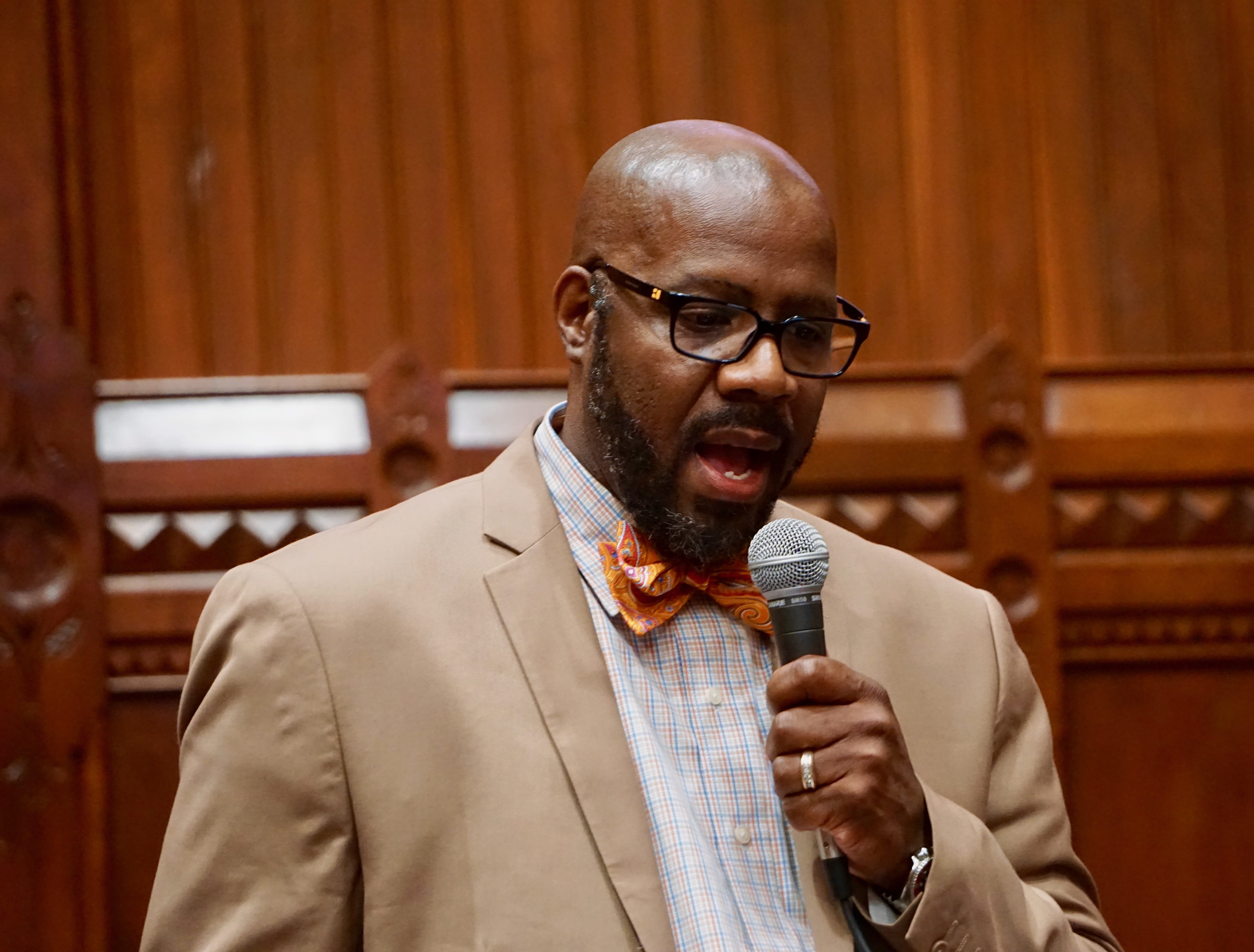 Rep. Anthony Nolan is a New London police officer who says police must be held accountable.

“Enough is enough,” said Rep. Joshua Hall, D-Hartford, a former Hartford school teacher who now is a vice president with the union, AFT-Connecticut.

Members of the caucus urged their white colleagues to view the issue through their eyes and their lives.

“Think about us,” said Rep. Antonio Felipe, D-Bridgeport. “These are our stories.”

Four Democrats voted with 54 Republicans in opposition: Emil Altobello of Meriden, Jill Barry of Glastonbury, Joe De La Cruz of New London and Michelle Cook of Torrington. Rep. Jesse MacLachlan of Westbrook was the only Republican to vote in favor. He did not speak during a debate held in a largely empty House chamber.

The session was conducted under special rules that promoted social distancing as a COVID-19 safeguard. Legislators could cast votes from their offices in the Legislative Office Building.

Cook was emotional addressing the House. She told colleagues she still considered herself a supporter of Black Lives Matter, but she could not support the change in qualified immunity. Cook said the bill was ripe for a compromise – and seemed resentful that it never came.

House Majority Leader Matt Ritter, D-Hartford, had urged his caucus to reject the GOP amendment, saying the bill set a standard for limiting immunity in state law similar to the existing standard in federal cases – misconduct would have to be “malicious, wanton or willful.”

The bill would make sweeping reforms aimed at holding police accountable for misconduct, answerable to a new inspector general and local civilian review boards. It sets new standards for the use of force and limited the ability of police to search vehicles during the motor vehicle stops.

According to research  by the Connecticut Racial Profiling Prohibition Project, Black and Hispanic drivers are much more likely than whites to be pressed for permission to consent to a search, and inspections of vehicles yields contraband less than 20% of the time. Police are more likely to find illegal items through a searched based on probable cause.

When determining whether an officer acted reasonably, officials would consider whether the person killed had a deadly weapon, and whether the officer either heightened or attempted to deescalate the situation. Officers who witness their peers acting in an ‘unreasonable’ manner will be required to intervene or will be subject to the same punishment.

Chokeholds would be banned except when necessary to protect someone from the imminent threat of death.

The inspector general would have the ability to issue subpoenas so they can obtain documents and compel testimony from otherwise uncooperative municipalities or police departments.

The Police Officer Standards and Training Council could can revoke an officer’s certification if they behave in a way that undermines the public’s confidence in law enforcement, or use unjustifiable or excessive physical force. The council can also suspend an officer for up to 45 days.

State police would be required to be certified through the council. Currently, POST certifies municipal police, not state troopers.

POST would also expand its instruction to include implicit bias training, to teach officers to recognize and mitigate unconscious biases against certain populations they are sworn to serve, and work with other state agencies to come up with a statewide policy for how police officers should manage crowds, a nod to the mass demonstrations throughout the state and country in the wake of the deaths of George Floyd and Breonna Taylor. Such a policy would also identify the documentation police must provide after a confrontation with a civilian in a crowd management incident.

The bill would require the use of body and dash cameras for all municipal and state cops. It is expected to cost at least $8 million in the first year to buy the equipment and data storage services.

Earlier this week New Britain State’s Attorney Brian Preleski suggested lawmakers mandate body and dash cameras for officers after he completed his report on the police killing of a Waterbury man in January. That officer had not been wearing a body camera, complicating Preleski’s investigation.