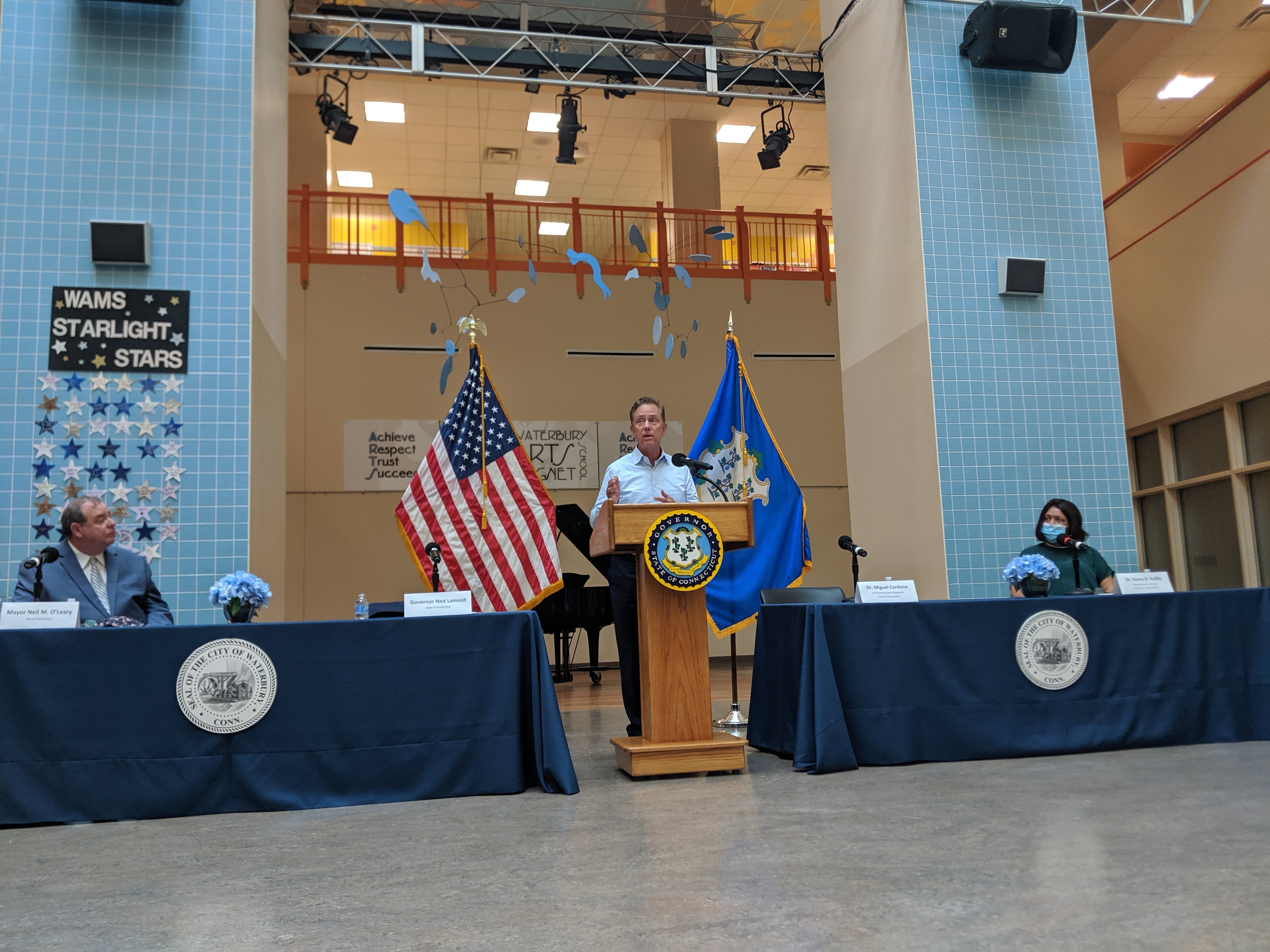 Gov. Lamont vows not to let technology stand in the way of students being able to participate in remote learning. He makes the announcement at a high school in Waterbury while the mayor and superintendent of the district watch.

As the pandemic threatens to force schools online again this fall, the state plans to spend $43 million in an effort to provide every student who needs one with a laptop and internet connection.

Gov. Ned Lamont hopes that purchasing 50,000 laptops and paying internet bills for 60,000 students for a year will close the state’s so-called digital divide, which prevented thousands of students from participating in remote learning last spring when schools closed.

Lamont – standing in a high school in Waterbury, a district where one-in-five students need a laptop and one-in-16 need an internet connection – said closing the divide is a civil rights issue.

“To me, this is the Brown vs. Board of Education of our generation, that separate but equal back in the 1950s is the digital divide of the 21st Century,” said Lamont.

Statewide, nearly 50,000 students – about one out of every 11 students – lacked a computer or another device as of mid-May, a survey conducted by the State Department of Education found. And nearly 29,0000 students didn’t have internet access, it was too slow, or their smart phone or computer wasn’t compatible with the learning platform being used by their school.

In general, districts with a majority of white students reported few issues with internet and device access.

“We have to make sure they don’t get left behind,” said Lamont of students who struggled to log on to remote learning when schools shut down in the Spring. “We’re going to find a way to have technology to help bridge the gap.”

Low-income families are significantly less likely to have broadband access – 56% for those earning less than $30,000 compared to 92% for those making more than $75,000 – the non-partisan Pew Research Center reports.

Closing this digital divide is critical since Connecticut has among the largest achievement gaps in the nation between students from low-income families and their classmates.

The $22 million the state plans to spend on purchasing laptops, $15 million paying for internet and $4.5 million on setting up 200 public hotspots for people to log on to the internet for free in places like town greens and Main Streets comes from the federal CARES Act that Congress adopted in March.

Nick Simmons, the Democratic governor’s director of special projects who is overseeing this initiative, said that the administration expects this investment to nearly close the digital divide for students.

“Our estimate is it is pretty close,” he said.

But closing the technology gap was just one of the numerous additional costs that school districts are facing as they gear up to reopen schools for both in-person instruction and online.

In a recent survey conducted by the state Department of Education, superintendents said opening schools during the pandemic is going to cost them an estimated $420 million more, of which $69 million was slated for technology upgrades.

Asked if more help is on the way for districts struggling with the added costs, Lamont said the administration plans to help provide schools with the personal protective equipment.

“We are going to provide anything they need,” he said.