In Connecticut briefing, Fauci urges a return to classroom 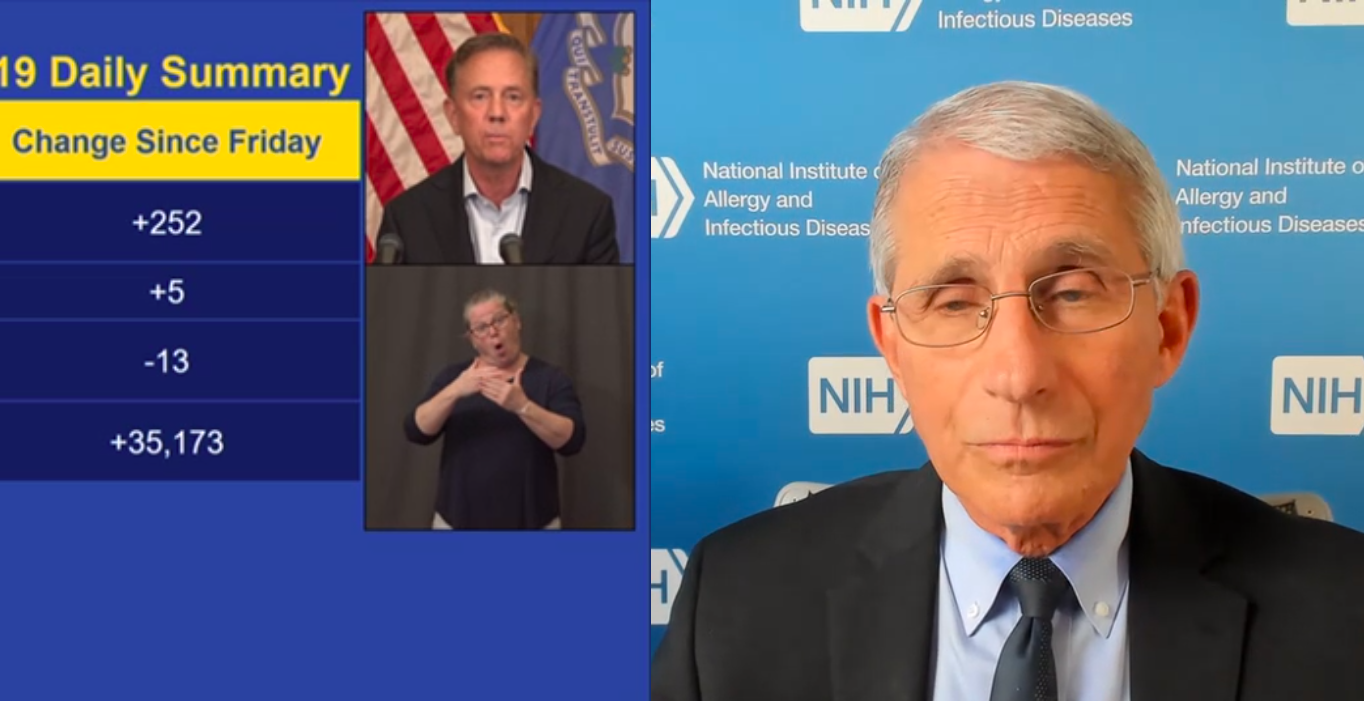 Dr. Anthony S. Fauci, the nation’s top infectious disease expert, strongly urged a return to classroom instruction wherever COVID-19 infections are under control, but he declined to say Monday whether Gov. Ned Lamont was correct in leaving school openings to the discretion of local superintendents.

”That’s really a question that I can’t answer,” Fauci said. “It would be presumptuous of me to come into the state of Connecticut and talk about what the governor and what the officials should do. I know I’ve worked now with the governor for several months, and I think he’s perfectly capable of making that decision.”

Fauci appeared with Lamont via video conferencing on a day when the governor released the metrics to guide schools on resuming classroom education, one of the most complex and emotionally fraught decisions confronting public officials and parents since the rapid spread of the novel coronavirus.

The timing was a coincidence. Fauci, the director of National Institute of Allergy and Infectious Diseases, originally was to join Lamont last week.

While consistent on favoring a return to classroom instructions should the virus allow, Lamont  has given mixed messages in recent weeks on whether the decision should rest with the State Board of Education or local school boards. Last week, he tried to split the difference — setting a standard, but not mandating a course.

That has put school superintendents on the hook. They are navigating between unionized teachers dubious of the safety of classroom instruction and parents, many desperate for their children to resume their education and others questioning whether school can be safe, even in a state with a low infection rate.

The debate could be succinctly summarized in three messages quickly sent to the governor on Twitter when he tweeted that Fauci would be joining him in a briefing.

”Please, be open to whatever he has to say about opening schools,” one person said. “Let him know he has the freedom to speak in our state, unlike so many others. We need his wisdom and expertise.  Families need to fully understand the risks involved.”

That was followed by a plea to indefinitely postpone a return to the classroom.

“Please rethink opening universities & schools for in person learning. Schools across the country that are doing it are seeing spikes with staff & children. It is not going to be safe. Protect them.”

And another pleaded to open them.

“Open the schools, Ned. I cannot teach my kids and work. One thing is going to be put on the back burner and it’s not going to be my kids.”

Connecticut has outlined three options: Classroom instruction, distant learning or a mix of the two. 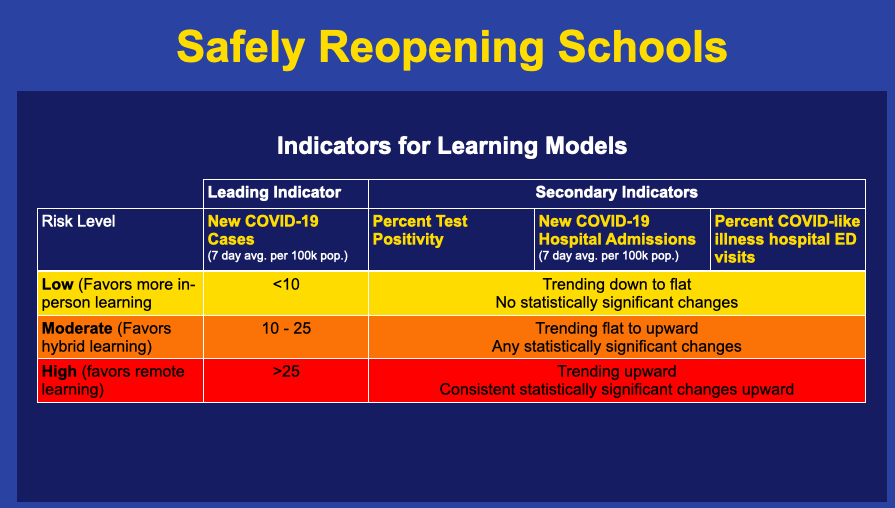 The state’s primary indicator for a safe return to school is a rolling seven-day average of new COVID cases staying below 10 per 100,000, which will be monitored weekly on a county basis. The state average is currently 2 per 100,000, with no county above 3.

But school systems already are looking beyond the metrics. Greenwich, for example, said it saw no way for its high school students to maintain social distancing.

Wethersfield has informed parents it will opt for a hybrid plan, allowing small classes and regular cleaning. Students will be divided into two cohorts, with one cohort attending school on Monday and Tuesday and the other on Thursday and Friday. On Wednesday, the schools will be cleaned. On-line learning will supplement the classroom instruction.

Others are making similar decisions.

Fauci, whose daughter is school teacher in New Orleans, said Connecticut currently has “the upper hand” in fighting the virus, broadly hinting that a return to school with strict rules on masks and social distancing is advisable.

“My approach is always, and I’ll say it whether I’m in Connecticut or in any other place, is that the default position should be to try, as best as you possibly can, to open up the schools for in-person learning,” Fauci said. “It’s important for the children because of the psychological benefit and in some places, even for the nutrition of children who rely on the breakfast and lunches in school for proper nutrition.”

Fauci said negative consequences of keeping schools closed ripple widely, but there is no precise way to balance the public-health risk of reopening schools against the educational and economic losses of keeping them closed.

“It’s a tough thing to balance, because it becomes a judgment call,” Fauci said. 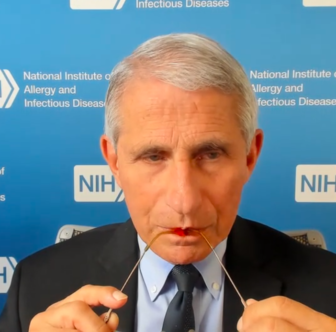 Dr. Anthony S. Fauci, waiting for the start of a video briefing with Gov. Ned Lamont.

He echoed remarks made recently by Dr. Scott Gottlieb, the former Food and Drug Administration commissioner who has been advising Lamont. Gottlieb said students would benefit from classroom instruction even for a month or two, even if COVID metrics dictate a return to distant learning.

Fauci warned no plan was likely to remain unchanged for the school year.

”You need to be very flexible, with the primary motivating force being the safety and welfare of the children and the teachers,” Fauci said.

Lamont told reporters earlier Monday that he wanted Fauci to join him in a briefing, because he is a trusted voice, even if the White House has worked assiduously to undermine his message of continued caution and vigilance.

“We had a couple of informal conversations over the last couple of months. You know me, I tend to pick up the phone…and introduce myself and try to get the best insights I can,” Lamont said. “And along the way I invited him, just because he can explain the science of these pandemics in a way that people understand and in a way people trust.”

The governor declined to address President Donald J. Trump’s criticism Monday of Dr. Deborah Birx, the coordinator of the White House coronavirus task force. Trump took issue with Birx saying over the weekend that the pandemic was “extraordinarily widespread” in the U.S., calling her performance in the interview “pathetic.”

“I don’t have to get into that, but I trust Dr. Fauci,” Lamont said. “He has the experience, he has the judgment, he has the independence. I think we’ve known that. He’s stood up and done what’s always right from the very beginning.”

Lamont, whose administration no longer updates COVID data over the weekend, released statistics for the past three days: Only 252 of the 35,173 tests over the period yielded new cases, a positivity rate of seven-tenths of one percent. There were five deaths, and hospitalization fell below 60.

The most troubling metric, Lamont said earlier Monday, was a spike in cases among teens that he attributed in part to parties.

“I’m aggravated by these parties I keep hearing about, one up here in northeast Connecticut,” Lamont told reporters after an event at UConn in Storrs. “We’ve had more infections of young people the last five days than they’ve had in the last three months, and it’s outrageous. And you’re putting your family and your community at risk.” 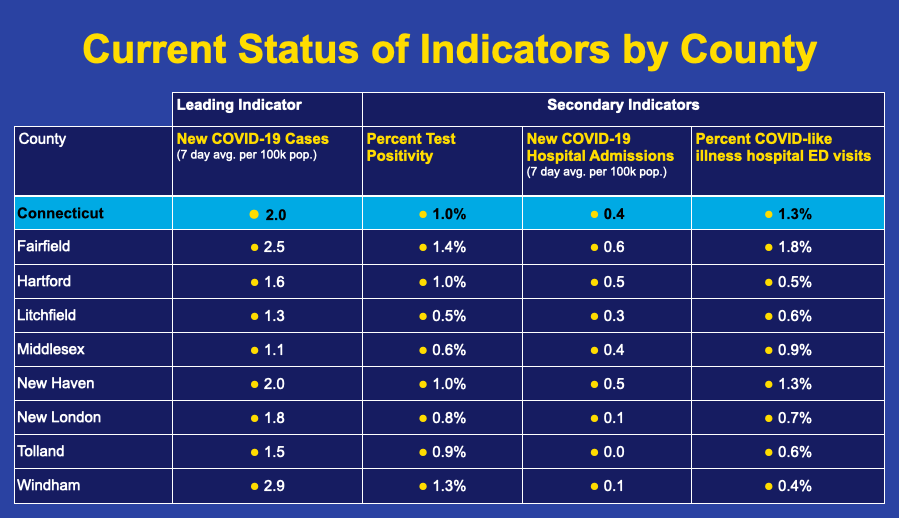