A Washington spectacular, and a Waterbury tent party, for Trump 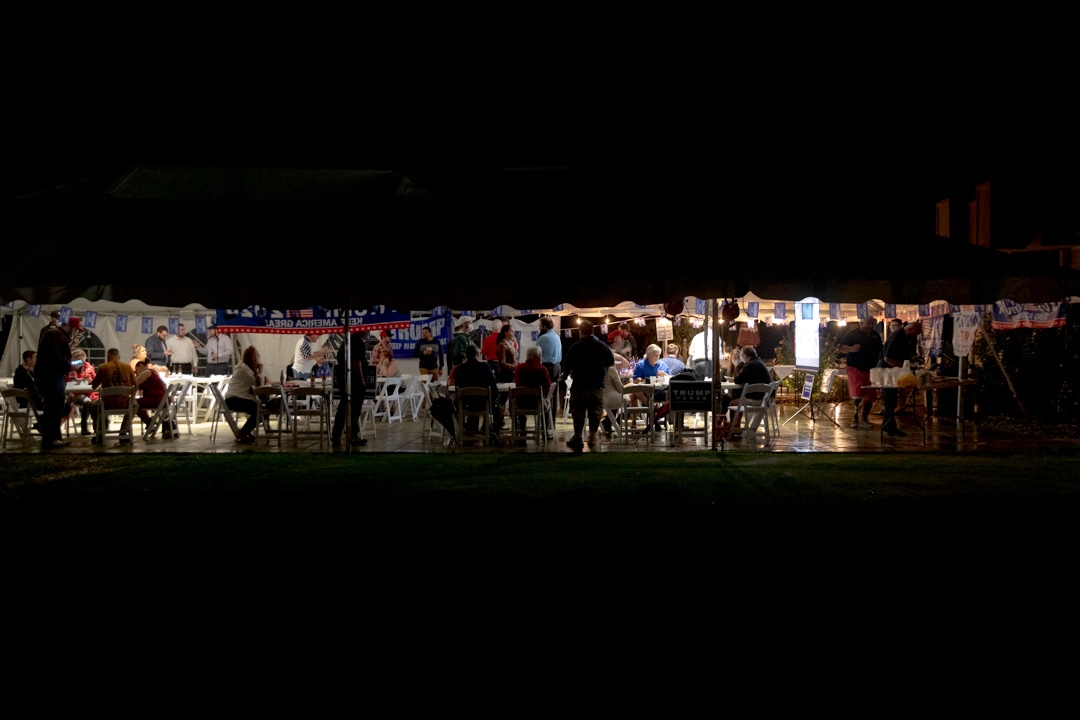 There was no balloon drop, no confetti. A party in a tent in Waterbury was the best option for most GOP delegates on the night President Donald J. Trump accepted the nomination.

Waterbury — It was a night to break precedent. Donald J.Trump accepted the Republican nomination for president Thursday on the south lawn of the White House, and Connecticut delegates watched from a tent on the edge of a hilltop golf course.

As was the case in Washington, masks and social distancing seemed optional in Waterbury under the white canopy erected near a putting green outside Verdi, the restaurant and banquet hall run by Rep. Tony D’Amelio of Waterbury, an early supporter of Trump.

The $25-a-ticket watch party was hosted by Jeffrey Santopietro, the state coordinator of the Trump campaign. To his surprise, it became the only semi-official state GOP observance of the Republican National Convention. He wasn’t sure what to expect.

“It was just a fun idea,” said Santopietro, who attended the 2016 convention in Cleveland with his brother, Joe, the former mayor.

Storms roared through Connecticut before the watch party, with a suspected tornado taking down trees. A few dozen people showed up, including two candidates for Congress and at least three members of the General Assembly, including D’Amelio. It wasn’t crowded.

Trump is a complicated figure in Connecticut Republican circles, where most elected officials started in the camp of other contenders in 2016. Rob Sampson, a state senator from Wolcott, stopped by to have a beer and mingle. He was a Ted Cruz man in ’16. 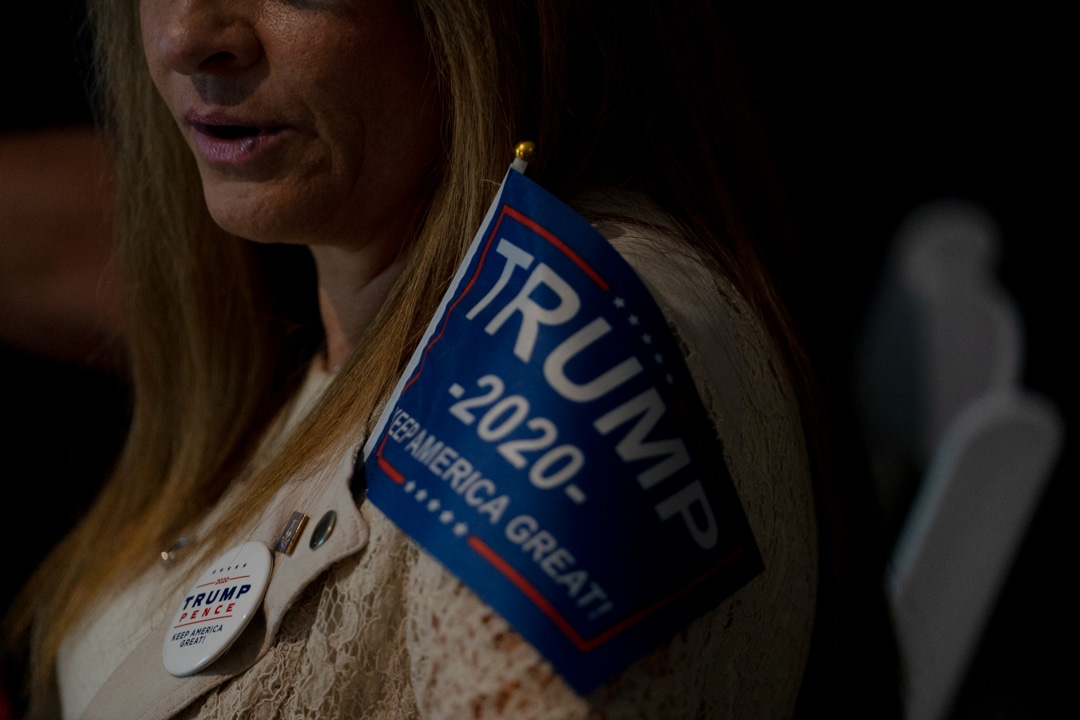 Annalisa Stravato, of Wilton, talks to a reporter.

“To me, it’s a binary choice between someone who loves this country, believes in American patriotism, wants America to be first in the world and someone who is moving in the wrong direction, in my opinion,” Sampson said.

That direction is to the left.

Sampson, who wore a mask, was speaking long before the president walked on stage with the White House as a backdrop, but he and others under the canopy in Waterbury sounded some of the same themes they would hear later from the president.

“Everything we’ve achieved is now in danger,” Trump said. “This election will decide whether we will defend the American way of life or allow a radical movement to completely dismantle and destroy it.”

Sampson said Biden was the new spokesman for Democratic socialism.

“As  much as we might want to characterize Joe Biden as somebody who is a moderate, I don’t think he is a moderate any more,” Sampson said.

Manny Santos, who lost as the 2018 nominee for Congress in the 5th District — the fate of every other GOP congressional candidate in the state since 2006 — said a Trump-led ticket is a help in 2020.

“Most people understand what’s at stake. At the heart of most America, we’re either center or center right,” Santos said. “What’s been happening, all these riots going on, all this destruction across our cities, it’s proven to many Americans that Democrats are in fact out of control. We don’t hear enough in the media from the Democrat leaders condemning all these actions.”

The suburbs outside Waterbury are friendly to such messages, but Sampson said he worries about the rest of the party, particularly in Fairfield County.

“I don’t know what they are going to do in this race, and I hope that doesn’t affect our legislative candidates,” said Sampson, a conservative in a safe Republican district. “There’s little chance Trump is ever going to win Connecticut, but if that filters down to affecting our legislative races, that’s a concern.” 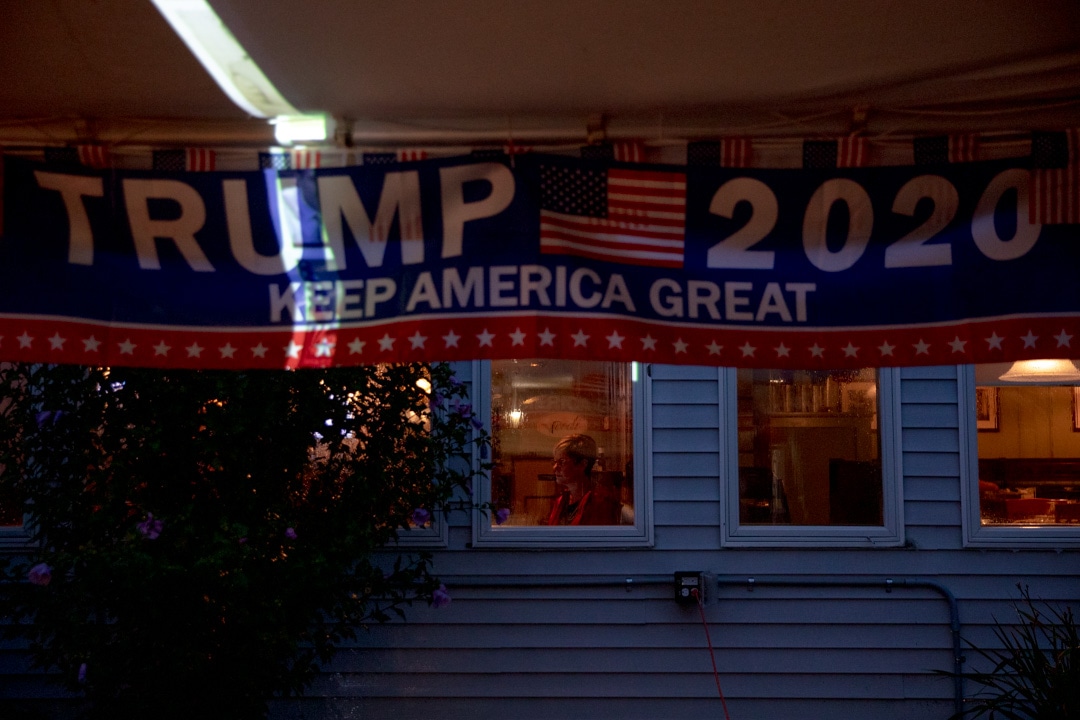 Supporters of President Trump gathered to watch his acceptance speech on Thursday from a tent set up up outside Verdi, the restaurant and banquet hall run by Rep. Tony D’Amelio of Waterbury, an early supporter of Trump.

Annalisa Stravato, a Trump delegate in 2016 who was looking forward to her second national convention this year, is clear-eyed about Trump’s appeal in her corner of Connecticut. She is from Wilton, one of the reliably Republican towns in lower Fairfield County that no longer are reliably Republican.

Mitt Romney easily carried Wilton over Barack Obama in 2012. Four years later, Trump got crushed, winning just 36% of the vote. In the most recent GOP primary, 28% of Republicans broke with the president, voting for “uncommitted” or a gadfly candidate.

“I knew what I was getting when I voted for him,” Stravato said.

David X. Sullivan, the 2020 nominee in the 5th, said he sees the convention and Trump as a plus for his own candidacy.

“I think as far as a non-conventional convention, I think it’s been an outstanding three nights,” said Sullivan, who wore a mask. “Going through the 41 towns [of the district] I can tell you people are very energized and excited.”

David Sullivan, left, of New Fairfield, and Bill Evans, of Wolcott. Evans is working as an advisor for Sullivan’s congressional campaign.

Margaret Streicker, the transplanted New York real-estate entrepreneur who is the Republican nominee for Congress in the 3rd District, acknowledged that the president can create awkward moments for GOP down-ballot candidates.

“I recognize that the president is a divisive figure in some circles and I also recognize that at this point in our current history, we need decisive leadership,” she said. “My focus is on jobs. It’s on the economy. It’s getting us back to work.”

Rep. Lezlye Zupkus, R-Prospect, arrived wearing a red, white and blue jacket and a baseball cap with an embroidered message that pronounced her a “Trump Girl.”

Her message to Republicans less enamored of the president is simple.

“I say I am for somebody who loves America and and fights for our rights,” said Zupkus, a delegate. Aside from supporting Trump, she said she had two other reasons for becoming a delegate in 2020:  “Because I’ve never been to one. And I was asked.”

Chris Minutolo, of Naugatuck, listens to a fellow Trump supporter.

This convention would have been the sixth for Ben Proto, and the season feels odd with the Democratic and Republican versions constrained by COVID.

“The convention itself is all about the energy in the room. And that energy really builds around what’s happening and what we see,” Proto said. “We all kind of make fun of the balloon drop and the confetti, but there’s something about it that really lifts the political spirit — on both sides.”

There was no balloon drop on the south lawn. Republicans settled for fireworks launched from the Mall, soaring high above the White House. On the lawn watched J.R. Romano, the Connecticut Republican chairman. He said the view was awesome.

Democrats criticized Trump’s use of the White House as unprecedented and inappropriate. Trump appeared to enjoy that.