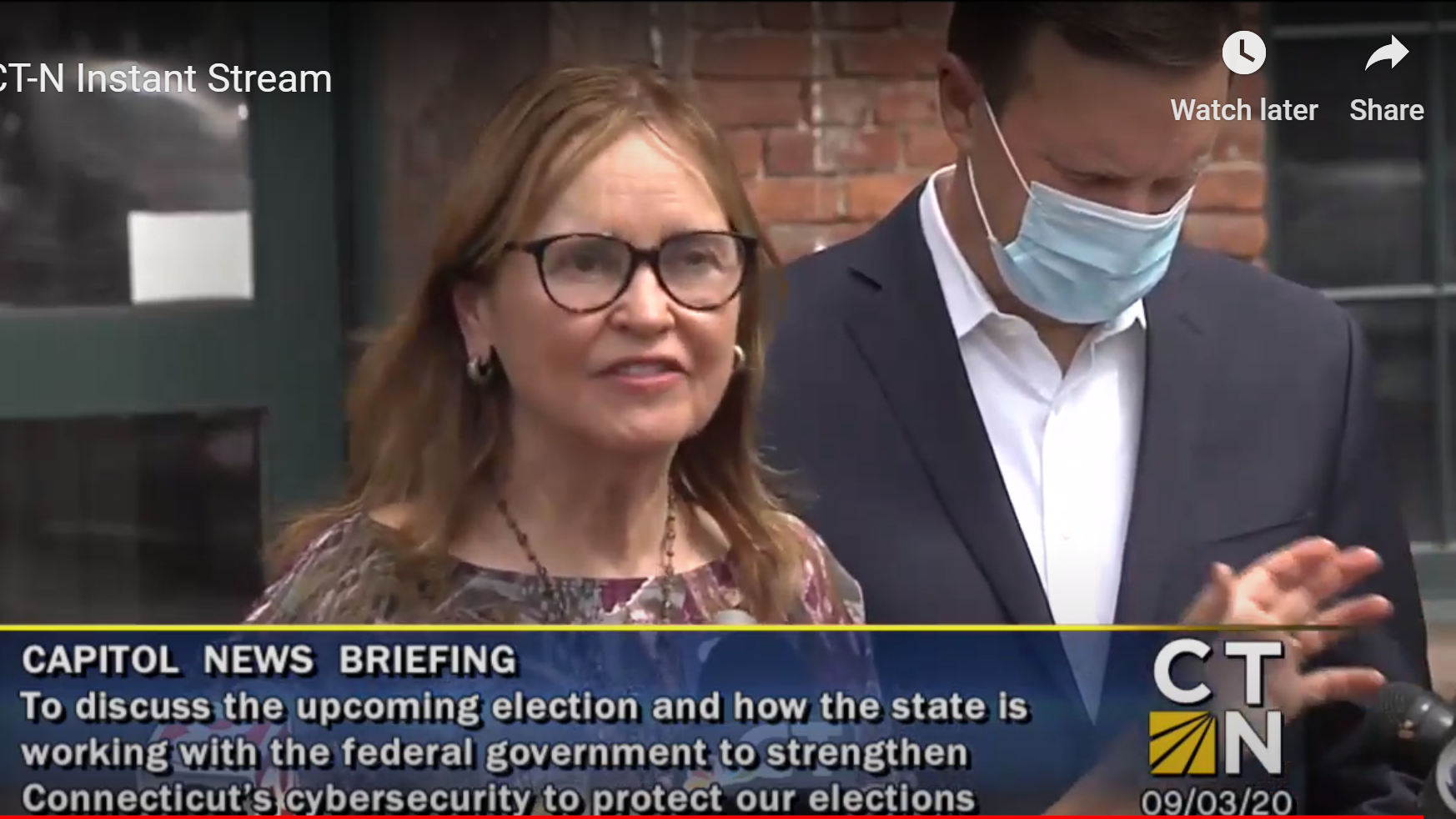 As part of her effort to combat foreign interference in November’s general elections, Connecticut Secretary of the State Denise Merrill on Thursday said she has hired someone to thwart social media disinformation campaigns.

The state was among those targeted by foreign actors in 2016 — something Merrill said she only discovered through testimony at a congressional hearing on foreign interference.

But those efforts failed, as well as other attempts to seek information about Connecticut’s voting system since then, Merrill said at a press conference with Sen. Chris Murphy in Hartford.

Merrill said it’s highly unlikely Connecticut’s voting information can be hacked, although it receives millions of “pings” seeking, unsuccessfully, to retrieve information.  A major reason the system can’t be breached is that it is not centralized, but run by each of Connecticut’s 169 towns, she said. “We’re fairly confident that the towns have secure systems.”

However, Merrill said she is concerned about disinformation campaigns aimed at confusing voters and suppressing the vote.

“Literally, hundreds of millions of dollars are being spent on these efforts,” she said.

The state will receive $5.4 million in federal funds to enhance the safety of in-person voting in polling places, expand vote at home mail-in voting, and protect the security and integrity of the election and the counting of ballots.  Merrill said she is using some of the money, which comes from one of the stimulus bills approved by Congress this year, to hire an expert in disinformation campaigns to protect Connecticut voters from foreign attempts to influence their votes.

“We are hoping we will be able to head this off at the pass,” she said.

Gabe Rosenberg, spokesman for the secretary of state’s office, said the office has hired an  election information security analyst on a contract basis through the election “to identify mis- and disinformation related to Connecticut elections, reporting and correcting it in real-time, and identifying any other information threats in the planning stage.”

Murphy said the Russians are the most active when it comes to voter disinformation campaigns.

Promoted by Russian media, stories are circulating of the posting on the “dark web” of voter information from Connecticut and a handful of other states. According to the stories, for each American voter in the database, the following information is available: full name, date of birth, sex, date of registration, home address, zip code, email address, voter ID number, and polling station number.

Merrill said the only information identified in these circulating stories is public information already available. But she said she is concerned that misleading stories like these — stories falsely insinuating there has been a security breach — could keep Connecticut residents from casting a ballot.

“I just want to assure voters we are on top of this,” she said.

During a trip to North Carolina on Wednesday, President Donald Trump suggested that those who vote by mail “then go and vote” in person as well. Intentionally voting twice is illegal.

On Thursday Trump said he meant that people who vote by mail should follow up by going to a polling place to make sure their vote has been counted, and if not, to then vote again.

Merrill said it would be extremely difficult, because of the town-based electoral system, for any Connecticut voter to case a ballot twice.