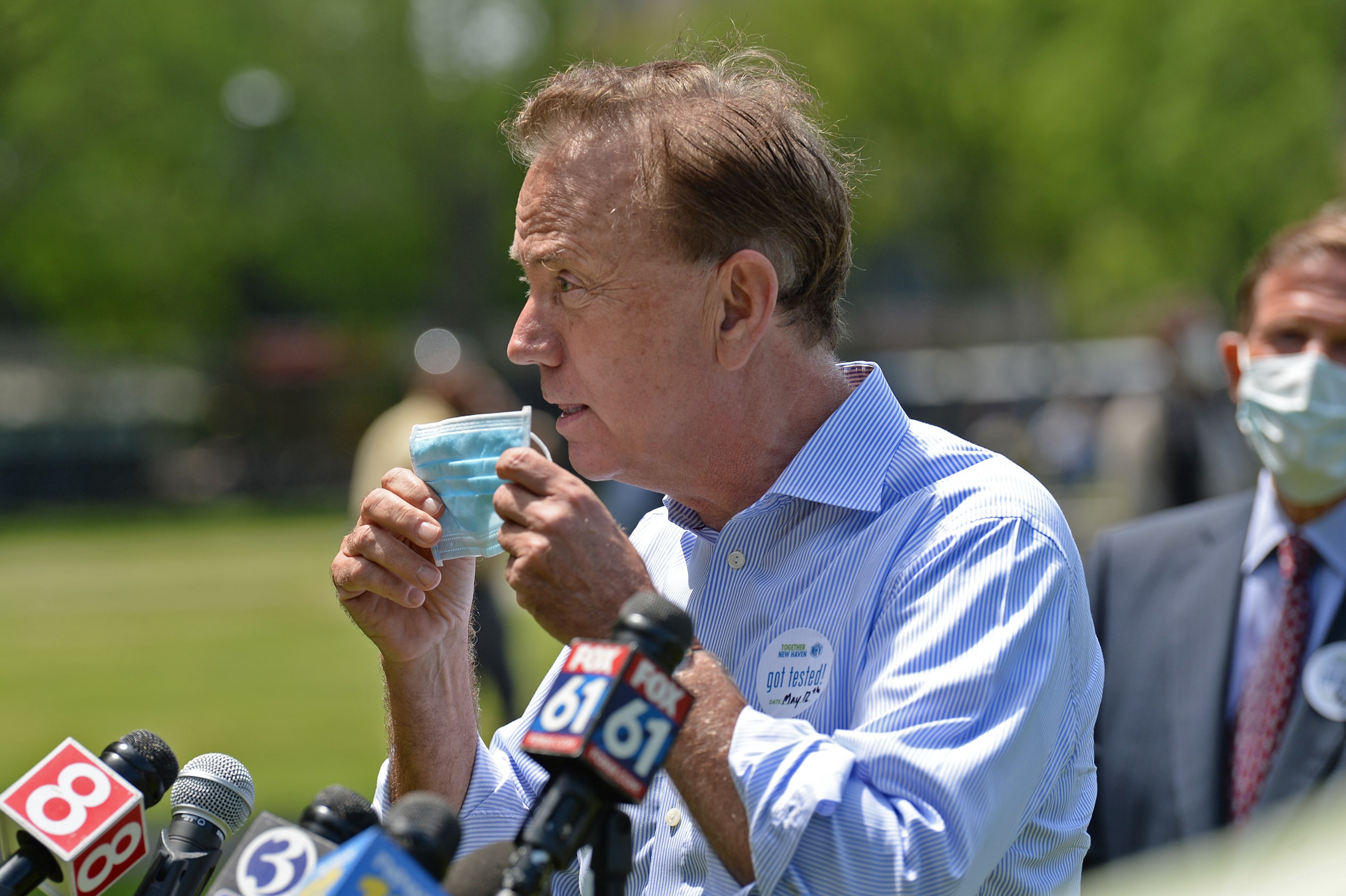 Gov. Ned Lamont talking about the importance of wearing a mask to prevent the spread of COVID-19 at a press conference earlier this summer on the New Haven Green.

Gov. Ned Lamont established a new series of fines Monday, ranging from $100 to $500, for those who refuse to wear protective masks in public or who organize or attend large, private events.

The new penalties, administration officials said, were requested by municipal leaders whose only other option to enforce coronavirus containment rules was to arrest violators and charge them with misdemeanor offenses.

The penalties include $100 for failing to wear a protective mask in public, $250 for attending a private gathering that exceeds state limits set early in the pandemic, and $500 for organizing such events.

Limits for most private gatherings include 25 people indoors and 100 individuals outdoors.

Outdoor gatherings in municipal parks — at fireworks, for example — are limited to 500 people, provided there is at least 15 feet of space between each party or grouping.

“If you have to count — get out,” Lamont offered as advice to those uncertain whether event organizing or attendance could get them into trouble.

The new fines come as COVID-19 infection numbers have begun to tick upward modestly in Connecticut, which still boasts one of the lowest rates in the nation.

One key indicator — a rolling, seven-day average of infection rates — had hovered just below 1% of all tests performed for much of the summer.

But an outbreak last month in Danbury, combined with recent concerns about “hot spots” in Norwich and at Central Connecticut State University in New Britain, had some municipal leaders concerned, administration officials said.

In addition, about one-third of Connecticut’s elementary and secondary school districts resumed full in-person instruction this fall, and Lamont said he expects it could reach 50% within the next two or three weeks.

Leaders in some communities have complained that mask use and other precautionary measures had begun to slip, but also felt that arresting individuals seemed to be a harsh response, said Josh Geballe, Lamont’s chief operating officer.

The fines, which can be imposed by police officers, local health officials or other designees of a city or town’s chief elected officer, give communities more options to enforce safety, the governor said.

Lamont added that he believes Connecticut still has a strong handle on coronavirus containment, noting that the latest average infection rate for the past seven days is between 1.1% and 1.2%.

By comparison, ten southern and midwestern states Monday had rates between 9% and 17.5%.

“I think the numbers are still trending in the right direction,” Lamont added. “I think we’re still in a pretty good place.”

Also Monday, Lamont modified an existing order that requires visitors from states with high infection rates of 10% or more — including Connecticut residents returning after touring those states — to self-quarantine for 14 days upon their arrival here.

Now those individuals can avoid the self-quarantine requirement, but only if they obtained a negative COVID-19 test within 72 hours prior to their arrival in Connecticut.

All those visiting or returning to Connecticut from high-infection states still must file an online travel advisory form with the state Department of Public Health.

The policy originally waived the quarantine requirement for health care and law enforcement personnel, government officials and others on the state’s list of essential workers — provided they also could show a negative test. Exceptions later were added for individuals attending a funeral or taking a child to college also to escape quarantine with a negative test.