Rep. Jeff Currey's kidneys are failing. A friend is stepping up. 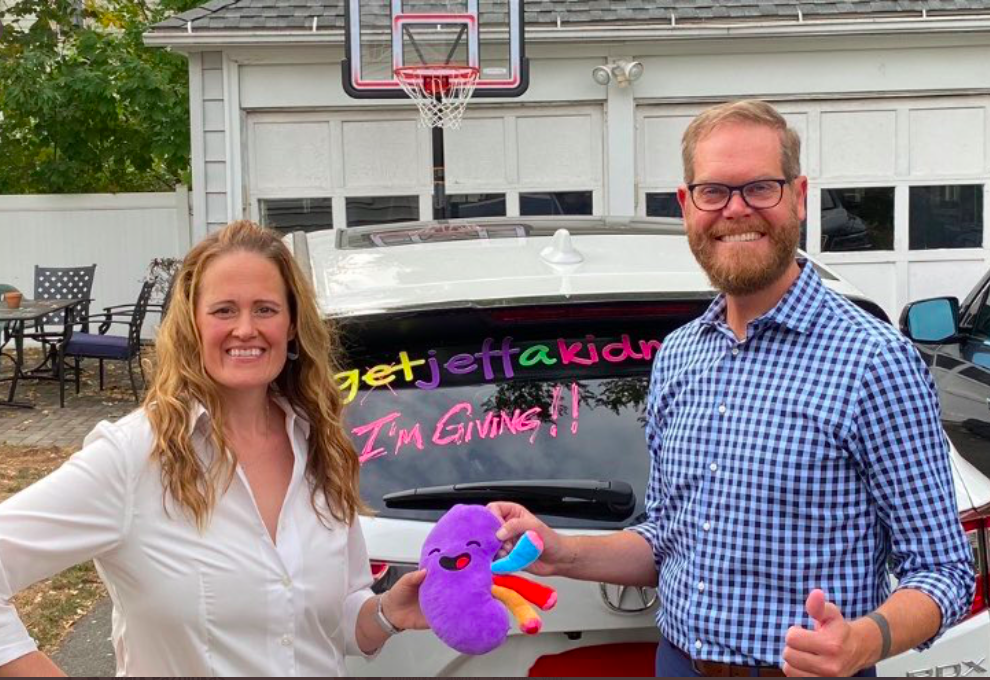 Jeff Currey, his kidney donor, Karen Gauvain, and, yes, a kidney plush toy. He used this photo on Twitter.

A friend is giving Rep. Jeff Currey, D-East Hartford, a kidney for Christmas.

To be precise, Karen Gauvain’s donation of her kidney will be available immediately after the holidays, the busy season for the bakery she owns and operates in Avon with her sister. Gauvain was quick to offer the kidney, but cautious of leaving her sister alone or feeling pressure to return to work prematurely.

“That was my only concern,” Gauvain said.

Currey, 41, who is seeking re-election to his fourth two-year term in November, announced the donation Monday on social media, the same venue he used to surprise followers in August with the news his kidneys were failing and he was seeking a donor.

Gauvain, also 41, of Simsbury has been cleared as a match at Hartford Hospital and gone through the physical and psychological screening required of organ donors. She was one of two potential donors in Currey’s social circle who matched.

“The net that we cast was so wide, and that we ended up with two people completely close to me is kind of crazy,” Currey said.

The other potential donor was Erin Concepcion, who is married to one of Currey’s childhood friends, Rep. Julio Concepcion, D-Hartford. Gauvain has been a friend since she and Currey were young 20-somethings working at a downtown Hartford restaurant, Trumbull Kitchen.

“She has been one of my closest friends for close to two decades,” Currey said.

A bout with gout a decade ago — unusual for a 30-year-old — led to a test and subsequent monitoring for kidney function. He was asymptomatic when given the news he had late-stage IgA nephropathy, meaning he soon would need either dialysis or a transplant.

Currey and Gauvain spoke to CT Mirror in separate telephone interviews Monday. He was preparing for a special legislative session this week and Gauvain, on her day off, was thinking about another week of keeping her four-year-old bakery going in the COVID-19 pandemic with curbside service.

In an interview, Currey described the generosity behind his friend’s donation as extraordinary, while the emphasizing the safety of the surgery for the donor. Currey said he is hoping his experience leads more people to consider donating their organs.

He would be the second legislator in four years to get a kidney from a friend. Senate President Pro Tem Martin Looney, D-New Haven, was the beneficiary of a transplant from Superior Court Judge Brian T. Fischer before Christmas in 2016.

Gauvain described herself as both impulsive and detail-oriented. She remembers her reaction when Currey told her he was a transplant candidate.

Then she began reading, learning everything she could about transplants. Her husband offered to also be tested, if she was not a match. She’s had no second thoughts, no doubts.

Once deemed a potential match, Gauvain said she spent a day at Hartford Hospital undergoing medical and psychological screening. She was deemed in good health, with two well-functioning kidneys of equal size. Surgeons will take her left kidney, the easiest to remove. She learned the remaining one will get larger as it takes over a greater responsibility for processing waste.

The psychological screen included questions about how she would feel if the recipient’s body rejected the organ.

“I would be bummed for Jeff,” she said.

Another question: How would she feel if she believed Currey was not living a healthy lifestyle.

Currey is tall, thin and endlessly energetic with what Gauvain, a trained chef, sees as one major health failing: A weakness for Taco Bell. Currey grew up across the street from a Taco Bell.

Gauvain said she and Currey already have had the Taco Bell talk. Call it a soft condition, not a dealbreaker.

“We have three months to get into the absolutely best health of our lives,” Gauvain said.

Gauvain said she and her sister will be offering only curbside service into the new year, a safeguard against exposure to COVID. Currey said the opening weeks of the 2021 session most likely will revolve around video meetings and hearings, allowing him to participate remotely while he recovers.

Recovery for a donor is relatively quick. She’ll be back in January. Gauvain started her business in 2013, making gluten-free granola. She and her sister opened the bakery four years ago. Currey said the name of the bakery says everything about his friend.