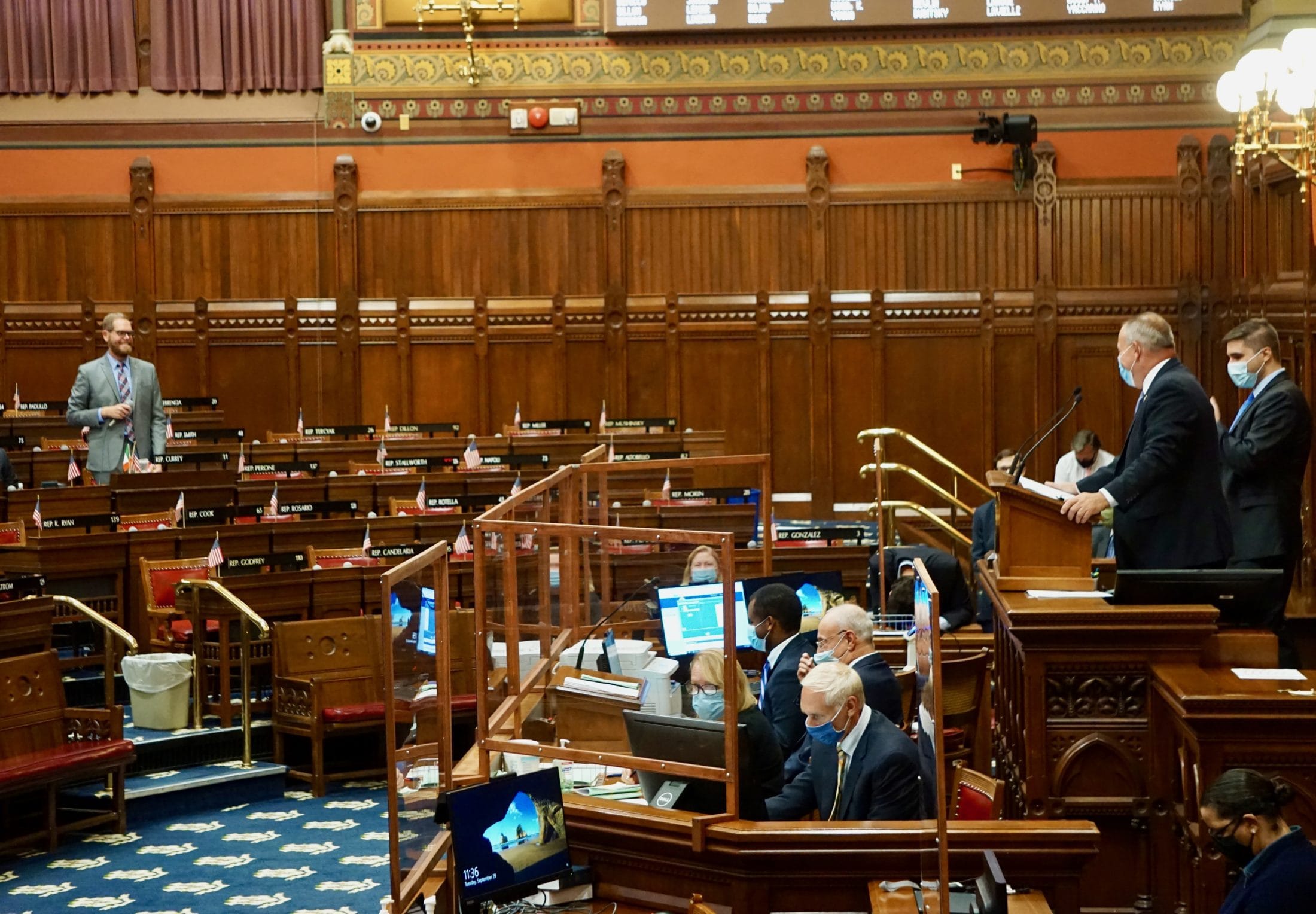 They played a little inside baseball at the State Capitol on Tuesday. Republicans threatened and then abandoned a rules fight in the Senate, a teaser to a special session that gets underway Wednesday over the objections of the GOP.

Like the big leagues, there was no one in the stands watch. The State Capitol remains closed to the public due to COVID-19, and the adoption of rules for what is expected to be a two- or three-day special session failed to draw much interest from the political press.

“We had some rules prepared today, because we felt that the Republican Party had been cut out of the process from the beginning,” said Sen. Kevin Witkos, R-Canton, the deputy minority leader. “The special session was drafted without Republican input.”

The Republican rules would have limited the agenda to matters directly related to the COVID-19 pandemic, narrowing a 10-subject agenda outlined in Gov. Ned Lamont’s call for the special session.

They also would have created a petition process allowing the Republican minority to place a bill before the Senate for a vote. In a special session, the only way to get a bill before the legislature is by the written consent of the House speaker and Senate president pro tem.

The prospect of roll-call votes on contested rules brought a full complement of senators to the Capitol, while rules were adopted in the House by voice votes, with a handful of members on either side of the aisle.

So, why did the GOP abandon the fight?

Witkos said Democrats countered with their own rules change: allowing senators to vote without entering the Senate chamber. If they were on the grounds of the Capitol or adjacent Legislative Office Building, they could have voted by sending in a written proxy.

Senate President Pro Tem Martin M. Looney, D-New Haven, said some of his caucus members preferred distant voting, as was allowed in the House during a special session in July and will be again this week. House members could vote from their offices.

The Senate, which has an older voting system that does not permit voting from the LOB, conducted votes in July by bringing in senators in small groups.

“Voting was not a problem,” Witkos said of the previous session. “I don’t understand why that was put in the rules this time, except to deter Republicans.”

If so, it worked.

The standard legislative rules were adopted via voice votes in the Senate, as was the case in the House.

The two major issues of the special session are bills that would set new performance-based standards for calculating electric rates and authorize about $500 million of dollars in borrowing for school construction.

Other topics include measures intended to quicken the counting of absentee ballots, codify in state law how the prevailing wage is calculated in public works projects, redefine the extent liability for pollution stays with property when it is sold, and clarify that condominiums are eligible for coverage under a program to aid homeowners with crumbling foundations.

There is a curiosity to one element of the special session, one with the faintest echoes of the nomination fight in Washington over filling a U.S. Supreme Court vacancy so close to the election.

The legislature intends to confirm the judicial nominations of a Supreme Court justice and three Appellate Court judges. All four are serving on an interim basis after being nominated by Lamont in July and endorsed by a vote of the legislature’s Judiciary Committee.

Typically, off-session appointees face a full confirmation vote in the next regular session, which is not until next year. There is no legal need to complete the confirmation process in special session — and only the barest of political reasons. 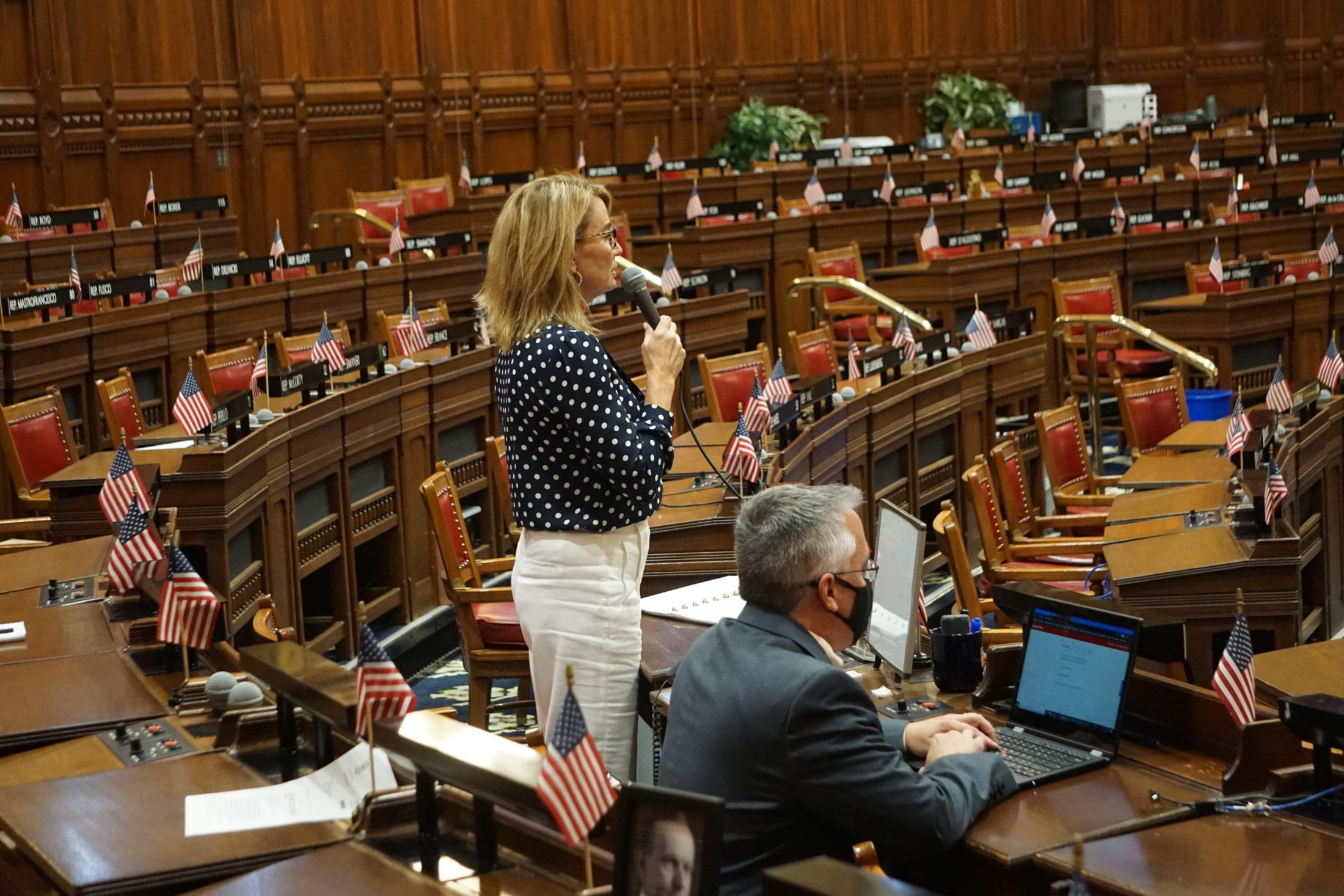 House Minority Leader Themis Klarides, R-Derby, said the special session was unnecessary. With no dispute over the rules, the brief technical session was skipped by most members. The substantive work begins Wednesday.

Confirmation of the Democratic governor’s nominees by the current Democratic-controlled legislature is a sure thing, while confirmation in the next regular session wold come after the election. But that’s pretty much a sure thing, too.

Unlike the confirmation of conservative Amy Coney Barrett as the successor to the liberal Ruth Bader Ginsburg, the outcomes of the four Connecticut nominations would not hinge on election results in November.

Lamont is not on the ballot, and Democratic control of the General Assembly is not considered at risk by operatives or leaders of either party. Democrats currently hold majorities of 91-60 in the House and 22-14 in the Senate.

Keller is the mother of House Majority Leader Matt Ritter, D-Hartford. Ritter, who is keeping his distance from his mother’s confirmation, declined comment.

House Minority Leader Themis Klarides, R-Derby, said she saw no need for a special session on the judicial nominations.

“Special sessions are for items that cannot wait until January. That has been our argument the whole time,” Klarides said.

Aresimowicz said there was no reason not to move forward with the confirmations and remove the interim status of a Supreme Court justice and three Appellate judges.

Without a special session that fall, there was no guarantee the 12 Superior Court and one Appellate Court nominations would be confirmed. Weicker was not seeking re-election, and the Democrats’ continued control of the General Assembly was uncertain.

In fact, Republican John G. Rowland was elected governor, and Republicans won a 19-17 majority in the Senate. Without the special session, the Senate could have rejected all 13 appointees, leaving the vacancies to be filled by Rowland.

Looney said it was prudent to vote now, before the next Assembly was elected. Asked if that showed a lack of confidence about holding onto the majority, Looney laughed.