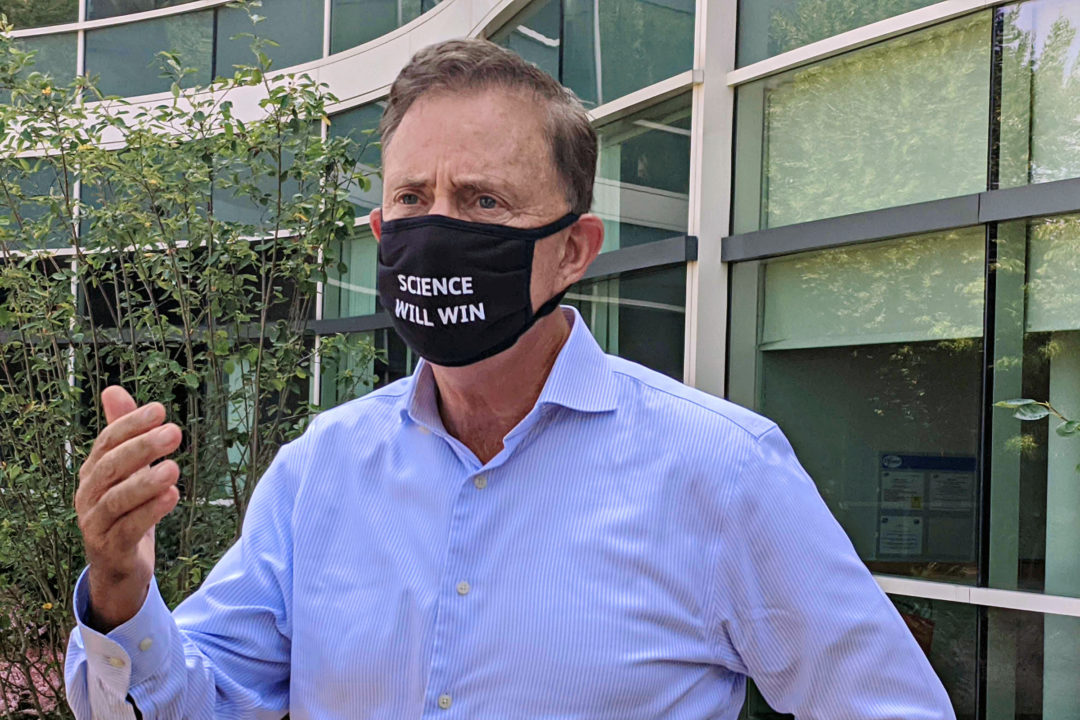 Despite nearly 2% of Connecticut’s COVID-19 tests coming back positive for a second consecutive day, Gov. Ned Lamont stuck to his plans Wednesday to  ease restrictions on certain businesses and social gatherings.

With 12 more patients hospitalized with COVID Wednesday, the statewide total eclipsed 100 for the first time since late June.

The administration reported 221 of the 12,390 coronavirus tests completed Wednesday were positive, a rate of 1.8% — the same rate recorded Tuesday. Connecticut had not seen a daily infection rate that high since late June, after it had moved past the worst of the pandemic’s initial surge.

“We’re not out of the woods yet,” the governor said during an early afternoon press conference. “We are spiking up a little bit.”

The governor said he would consider scaling back his reopening plans if weekly infection rates climbed into the 3% to 5% range, or if Connecticut saw spikes similar to the huge jumps Florida and Arizona faced this past summer.

“But right now we’re not there,” he said. “But we’re watching this sharply.”

The governor’s comments came just eight days before Connecticut is set to enter its third phase of easing COVID-19 restrictions — one that will permit theaters and concert halls to reopen on a limited basis and increase the indoor capacity of restaurants and event venues.

Lamont acknowledged Wednesday the state could be seeing an increase this fall due to many local school districts offering in-person classes and state colleges and university campuses opening their dormitories.

But he added that “Right now we haven’t seen any real flare-ups around that.”

Despite the two-day bump in infections, Connecticut’s average rate for the past week — a more important metric according to many public health officials — is 1.2%, one of the lowest seven-day rates in the nation.

Still, Connecticut enjoyed both daily and weekly infection rates at or below 1% for much of the summer.

At the same time, Connecticut hospitals — which were slammed during the worst of the pandemic — watched their beds open up as patients recovered.

But 17 people were hospitalized with COVID-19 on Tuesday and another 12 on Wednesday, bringing the new total to 104. That two-day surge represents a 39% jump.

Also Wednesday, Lamont announced an array of new resources — offered in conjunction with nonprofit partners including the United Way and 4-CT, the Connecticut COVID-19 Charity Connection — to support those who need to isolate or quarantine due to the coronavirus.

The state is dedicating $220,000 monthly for short-term hotel options for those who can’t quarantine at home.

And the 4-CT group will allocate more than $108,000 over the next five months for cash cards to help needy households cover quarantine-related expenses.

“These are incredible state-local and public-private partnerships that include the much needed expertise from people in our communities providing services to those who need them every day,” Lamont said.