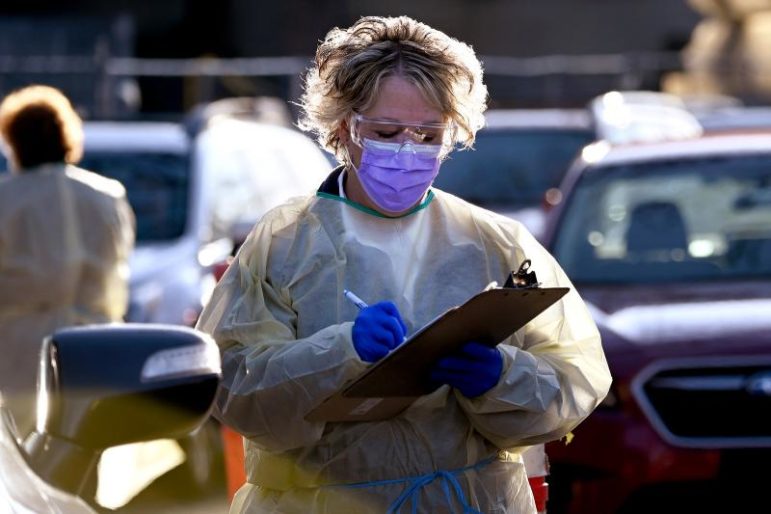 A worker at a drive-through test site.

As coronavirus cases rose statewide for a third successive day Thursday, a third nursing home in the greater Norwich area reported an outbreak involving more than half its population and 57 new cases among residents and staff.

And while Lamont didn’t retreat from his plan to further ease restrictions on businesses one week from now, he did acknowledge the potential for that reopening phase to be interrupted.

The outbreak at Harrington Court Nursing Home in Colchester comes on the heels of recent outbreaks at managed care facilities in Groton and in Norwich — all within the past two months.

“There is some community spread,” Lamont said during a televised, late afternoon briefing. “We’re not out of the woods and we have to be very diligent about these flare-ups.”

The Colchester home reported 46 positive cases among 76 residents and 11 cases among 127 staffers.

“We believe the outbreak started with a patient that was admitted to our admissions observation unit from Backus Hospital” in Norwich, Dr. Richard Feifer, chief medical officer for Harrington Court and other Genesis Health Care affiliates,  wrote in a statement Thursday.

Outbreaks in Colchester, Groton and Norwich nursing homes in past two months

Backus Hospital spokeswoman Emily Perkins could not be immediately reached for comment.

“As this pandemic continues, we remain stringent with restrictions and a whole host of other precautions” Feifer wrote. “As the Centers for Disease Control and Prevention (CDC) and Centers for Medicare and Medicaid Services (CMS) began providing protocols and guidelines for the coronavirus, we have diligently followed them and in many cases, have gotten out in front of public health guidelines, adopting even more stringent infection precautions than were recommended at the time.”

The Colchester outbreak comes one week after Fairview Rehabilitation and Skilled Nursing Care Center in Groton reported four cases, two among residents and two among staff.

Since then it has escalated to 11 residents — one of whom has died — and to 10 staff members, according to a statement released late Thursday afternoon by Fairview’s executive director Billy Nelson.

“As a skilled nursing community, Fairview has no greater priority than the safety and well-being of our residents and staff,” Nelson wrote, adding facility officials believe the outbreak was caused by “one unknowingly asymptomatic staff member who came in contact with residents and employees.”

Fairview has since tested all staff and residents, instituted contact tracing and reported the problem to state and local health officials.

The highest-profile incident, though, involved Three Rivers nursing home in Norwich. State health officials in mid-September ordered the removal of all residents from that facility after 27 people have become infected and four had died.

A temporary manager appointed by the state just prior to the closure uncovered numerous code violations.

The closure followed a nearly two-month investigation, health officials said, implying that cases might have begun developing at Three Rivers in July, but reports of infection were not made public until August.

Lamont said nearly 7% of those tested recently for COVID-19 in Norwich have been positive, more than three times the statewide infection rate.

But the new infections in southeastern Connecticut come as cases statewide have begun to rise.

The daily statewide infection rate hovered just shy of 2% Thursday for a third successive day, highest single-day marks Connecticut has seen since late June. The state enjoyed rates below 1% for much of the summer.

Thursday’s statewide report also showed three more deaths from COVID-19, bringing the total to 4,511 since the pandemic began. Hospitalizations from the virus also rose by three, reaching 107 across Connecticut.

Lamont has noted that weekly infection rates — a rolling average of the previous seven daily rates — remain among the lowest in the nation.

Connecticut’s weekly rate stood at 1.3% on Thursday. By comparison, many states in the Deep South and Midwest have weekly infection rates ranging from 10% to 20%.

Connecticut is set to enter its third phase of easing COVID-19 restrictions — one that will permit theaters and concert halls to reopen on a limited basis and increase the indoor capacity of restaurants and event venues — in just one week.

And Lamont said Tuesday and Wednesday, despite rising infection rates, he still planned to go forward with that reopening effort.

When asked again Thursday, he initially deflected the question, saying “that’s not even taking place until Oct. 8.” But when pressed what it might take for him to reverse this opening, the governor added “If I saw more Norwichs happening.”

Lamont also cautioned residents against relaxing social distancing, mask-wearing and other personal safeguards as the state tries to reopen further. “Slow down,” he said. “This virus never ceases to surprise us in a negative way.”