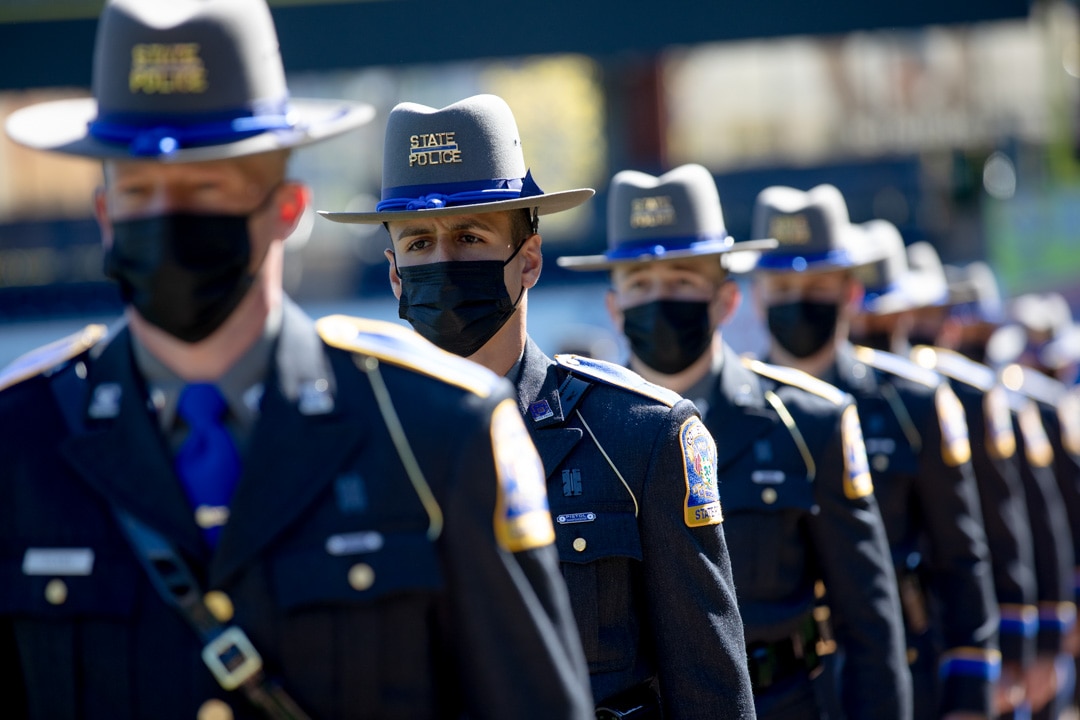 The 129th Training Troop of the Connecticut State Police.

The most diverse class in the history of the Connecticut State Police got their badges Thursday in the midst of a pandemic that altered their training, a police accountability movement that subjects them to increased scrutiny and higher expectations, and a polarized political environment.

The 129th Training Troop was welcomed to their graduation at a minor league ballpark by a governor at odds with the state police union over a controversial new law intended to curb police misconduct and tighten standards for use of deadly force.

“I am particularly proud of this class, given the complexity of the time that you are graduating into, everything we are asking our state police to do,” said Gov. Ned Lamont, speaking from home plate at Dunkin’ Donuts Park in Hartford. “It’s everything from the demonstrations to COVID.”

Lamont was subjected to a symbolic no-confidence vote by the state police union after signing a bill passed in July  that attempts to refine law enforcement practices and culture in the wake of widespread demonstrations after the police killing of George Floyd in Minneapolis.

House Minority Leader Themis Klarides, R-Derby, tried and failed to get a speaking slot at the graduation. She was offered a VIP seat and declined. Instead, she sat in the stands between two union leaders who arrived at the ballpark with “Troopers for Trump” masks.

The union president, Sgt. John Castiline, switched to a plain mask as the ceremony began. Andrew Matthews, the executive director, turned his inside out. A national coalition of state troopers has endorsed President Donald J. Trump. The Connecticut union has not.

On the field, the governor praised the police for responding to Black Lives Matter protests in Connecticut with empathy and restraint. Protected 24/7 by a state police detail, Lamont joked that he spends more time with state police troopers than his family.

“I love everything about the state police,” Lamont said. “They’ve got my back, and I’ve got your back.”

Later, the union officials and the Republican leader would react with fury to that remark. But inside the park, in the moment, it generated only applause from the spectators.

The class of 83 trooper trainees has 70 men and 13 women. They include nine Black men, eight Latinos, one Native American, one Black woman and three Latinas. They are joining a department that is 90% white, 90% male, and steeped in a paramilitary culture.

The class speaker — Terrance Rogers, 24, of Bridgeport — is Black. He was abandoned at birth, raised by a foster mother who died when he was 13, and inspired to become a state trooper after watching a basketball coach become a Bridgeport police officer.

“We have been taught complacency is our enemy. Never let your guard down. There’s no such thing as a routine traffic stop,” Rogers said, then shared a motto of not backing down. “If you can’t get out of it, get into it.”

Rogers said the class also was taught to appreciate diversity.

His class entered from center field, passing under a giant Dunkin’ cup that would later prompt an obligatory cop-and-doughnut joke from James Rovella, the former Hartford homicide cop who oversees the state police as commissioner of emergency services and public protection.

A chanted cadence kept the trooper trainees in step on the warning track. Half turned left, half right. Two by two, they followed the foul lines to folding seats on the infield dirt.

They sat as one, eyes front and shoulders back. Each placed their hands palm down on their thighs and fell still. Black cloth masks covered every recruit’s face from below the chin to above the nose. Each wore a gray Stetson, tilted forward in state-cop fashion. 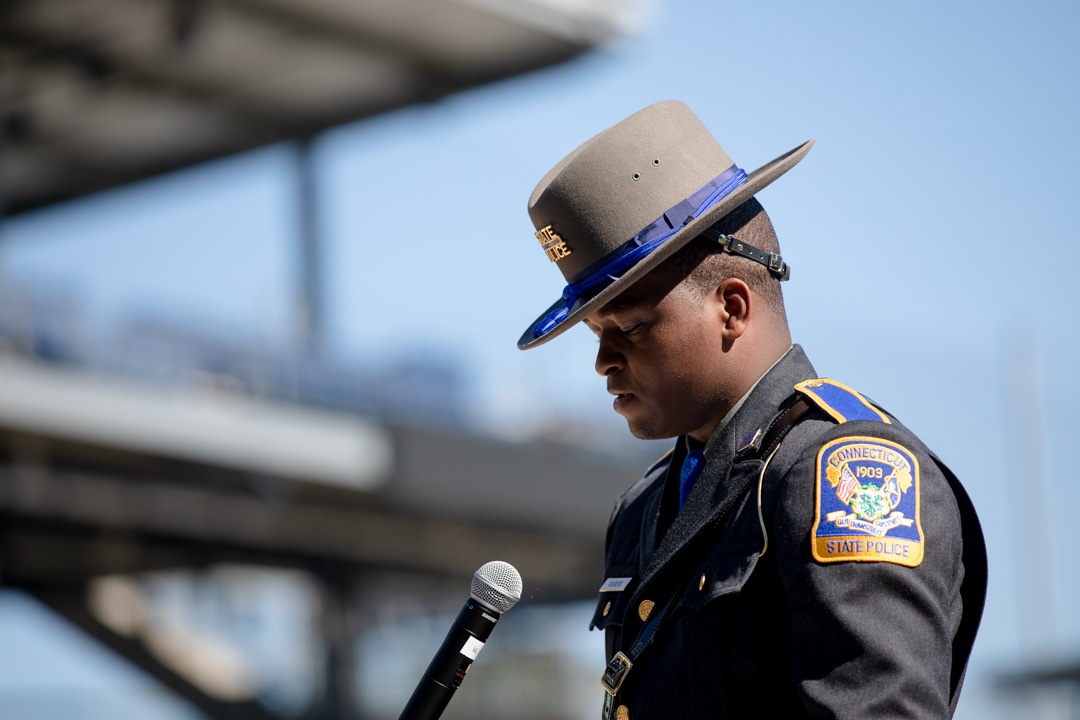 Sgt. Brian Narkewicz said the academy lowered the attrition rate by working with recruits before formal training, preparing them for the physical and academic challenges that awaited, as well as the culture of the state police.

“They gave them a sense of the discipline that was going to be required on their part and also some team building. In any kind of training academy environment, you have to bond as a team,” he said. “We all have moments of doubt and weakness, and it’s your wingman on the left and right that carries you through to the end.”

Shortly after convening the class in March, the academy shifted to a virtual curriculum delivered via Zoom, supplemented by small in-person instruction. On June 1, the trainees were summoned to the academy for the final four months of training. They slept in barracks, Monday through Friday. Their class motto became “Adapt and Overcome.”

“Once we were able to get back together on June 1, it was the old state police academy,” Narkewicz said. “They got the treatment, just like every state trooper walking around today received.”

Their commissioner says superiors expect and will understand good-faith mistakes.

“We’re not in the habit of throwing you away,” Rovella told them. “We’re in a habit of nurturing you. You are part of the family.”

Their union leadership says they begin their careers vulnerable to second-guessing and litigation. 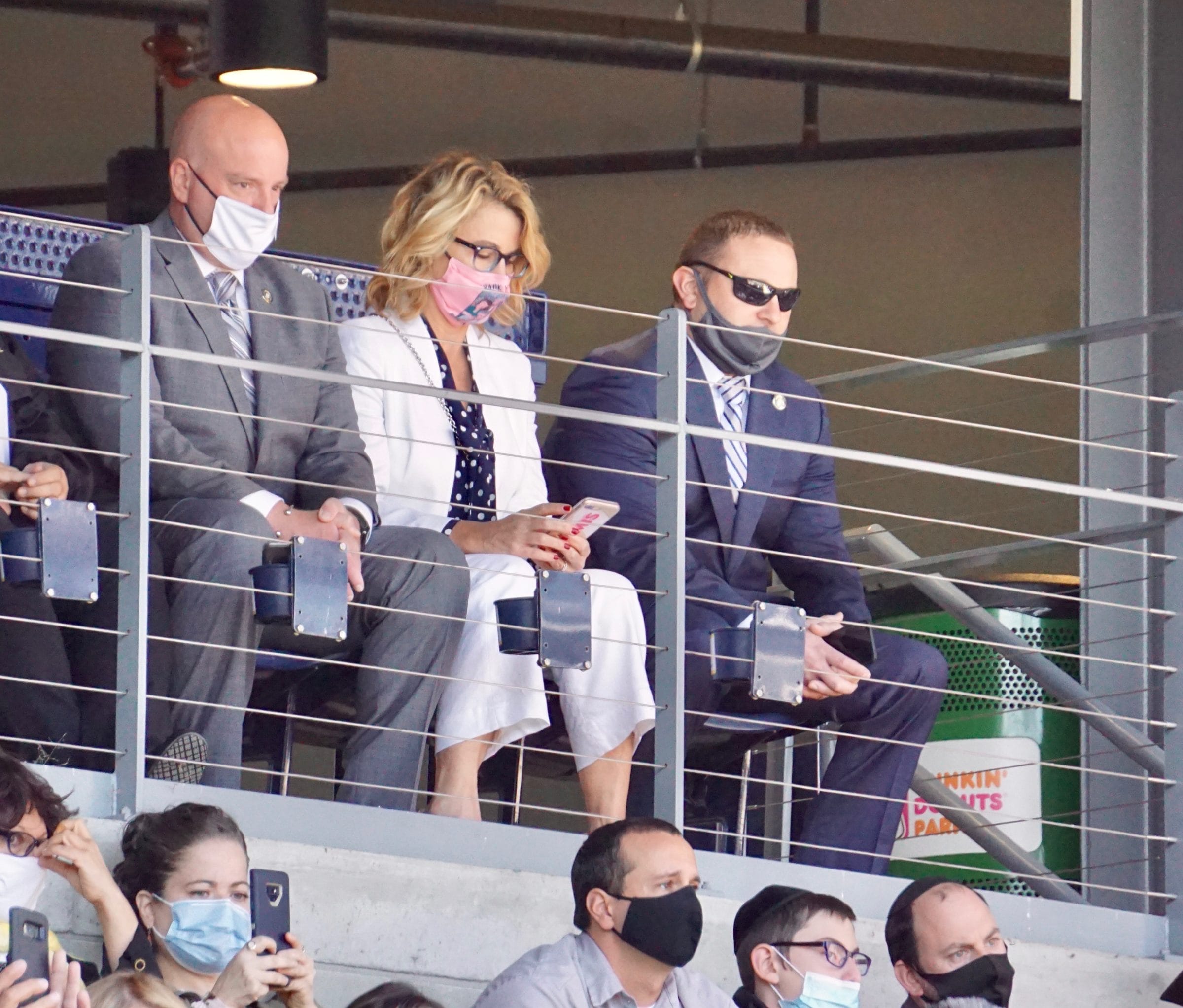 The new accountability law created an office of an inspector general to investigate complaints of police misconduct, requires police to intervene when witnessing brutality, mandates body and dash cameras, bans chokeholds in most circumstances and clarifies that deadly force can be used. Whether it not it strips officer of qualified immunity is disputed.

Police officers have protested en masse, claiming the end of governmental, or qualified, immunity in state courts would make police unable, or unwilling, to do their jobs. They warned that officers would second-guess decisions in situations where they need to act quickly.

Lamont exited the ballpark to encounter Klarides and two union officials, Matthews and Castine on the sidewalk. The governor and Klarides exchanged pleasantries. The union officials ignored him.

“We don’t support him,” Matthews said as the governor drove away. “The vote of no confidence was evidence of that. It’s unfortunate. It didn’t have to be that way. He put our people more at risk. He is in there talking about how he has our back. You didn’t have our backs when you signed that bill.”

Only one House Republican voted for the bill. None in the Senate.

Klarides, who is a potential challenger to Lamont in 2022, said the governor’s I’ve-got-your-back line was infuriating. She is not seeking re-election this fall, but Republicans are using the police accountability measure as a wedge issue in many districts.

“He said, ‘I have your back’ after he just signed a bill that not only hurt the state police and the ability to do their job?” Klarides said. “The real problem is it made Connecticut less safe.”

Matthews said the law, most of which does not take effect until next summer, will make recruiting more police difficult. The test will come soon enough.

The 130th Training Troop will be assembled in January.

A salute as the national anthem is played.