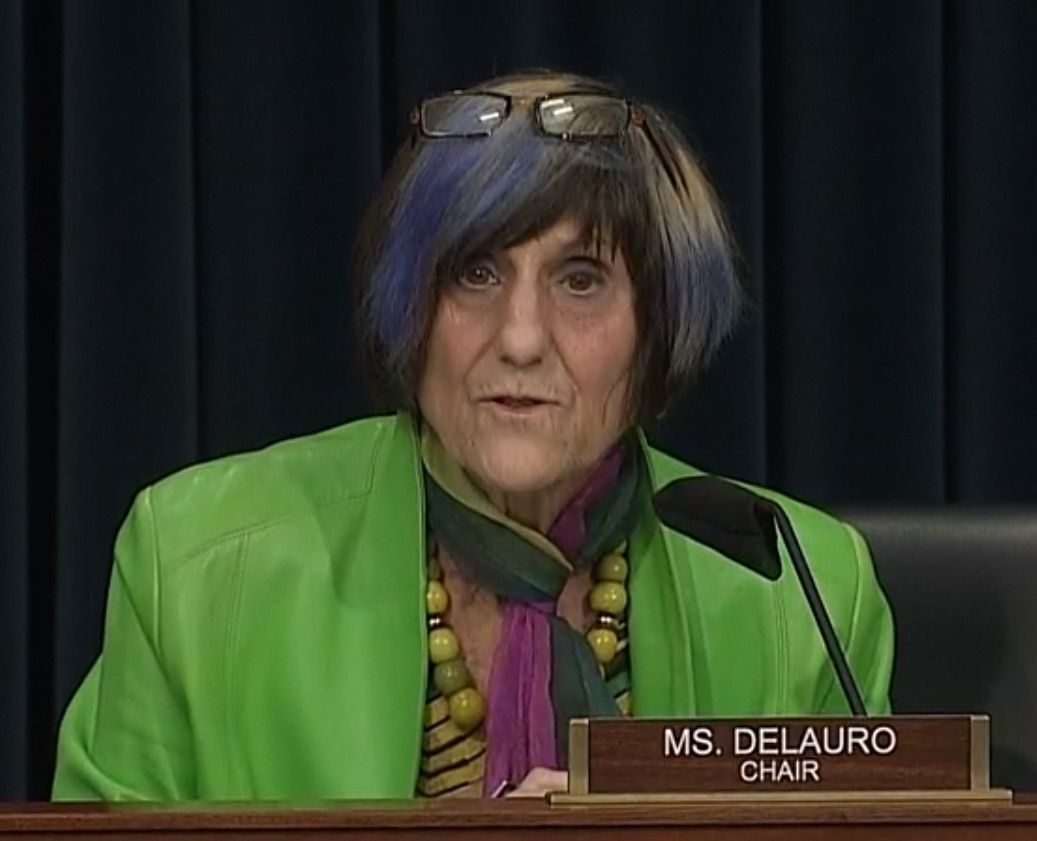 Washington – Rep. Rosa DeLauro, who has largely ignored GOP challenger Margaret Streicker, is hitting hard at the Republican’s latest ad, which attacks the lawmaker for allowing former Obama chief-of staff Rahm Emanuel to live in the basement of her Capitol Hill home.

DeLauro’s campaign sent a letter Friday to five television stations, WFSB, WTIC, WTNH, WCTX, and WVIT, with what it called “a line-by-line outline of the untruths” Streicker’s ad contains and requested that the letter be placed in their “political file so that the public can see the truth behind Ms. Streicker’s deceitful and worthless claims.”

Streicker’s latest ad accuses DeLauro, D-3rd District, of “pulling strings to make her family rich,” and “securing millions of dollars in D.C. and government contracts,” by giving Emanuel a free place to stay. 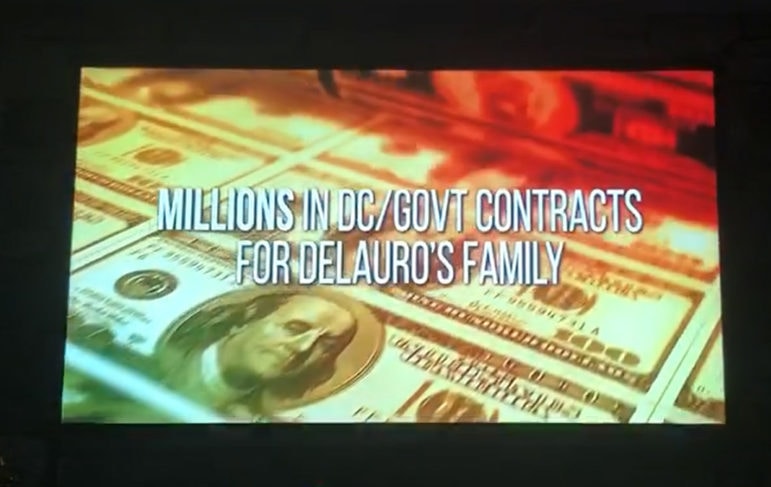 A frame from Streicker’s commercial.

The accusation, an old one in Connecticut Republican circles, is that the polling company of DeLauro’s husband, Stanley Greenberg, somehow benefitted from his wife’s status and her hospitality toward Emanuel, who left Washington D.C. in 2010 to successfully run for mayor of Chicago.

But he said  “Ms. Streicker fails to say that the ‘free housing’ Mr. Emanuel received was – in fact – to stay in Representative DeLauro’s basement guest bedroom.”

“She fails to say that Mr. Emanuel stayed there while he was a Member of Congress alongside Representative DeLauro and that he stopped staying there when he became chief of staff,” Svoboda wrote. “ She fails to acknowledge that letting a longstanding personal friend stay in your house is such a normal courtesy, that the ethics laws expressly allow for it…” 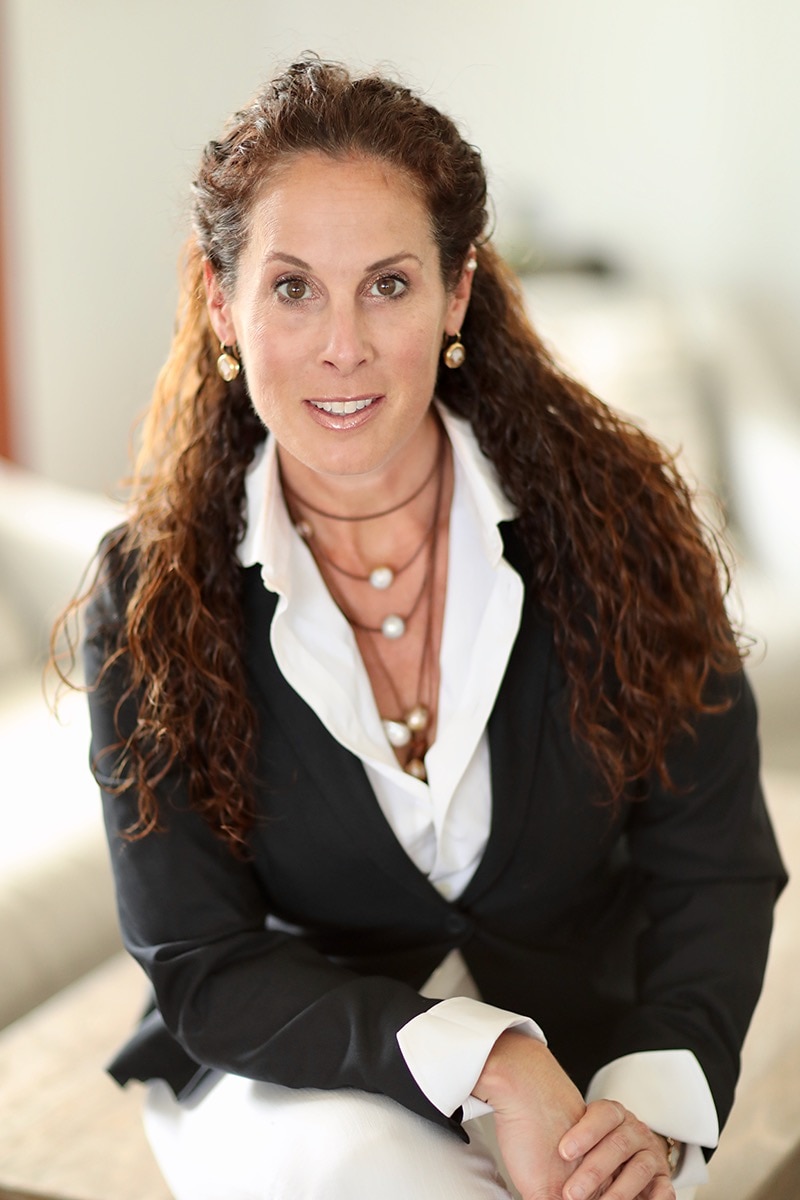 “My opponent is a slumlord who was fined $1.2 million by the New York Attorney General because of her mistreatment and abuse of tenants,” she said in a statement. “Those are citable truths. And now she is using the vast fortune she gained to spread false accusations instead of telling voters her positions on the issues so that they may make an informed decision as they fill out their ballots.”

In 2015, Streicker’s company agreed to pay $1.5 million in fines and legal fees – but did not admit guilt — to settle accusations from the New York attorney general’s office that it was offering rent-regulated tenants illegal buyouts.

Greenberg’s work for Democrats has long been an issue with  DeLauro’s political foes.

According to DeLauro’s latest financial disclosure filings, which provides the values of assets in broad categories, Greenberg’s polling firm was valued at between $1 million and $5 million.

While it may not have contracts with the federal government, Greenberg has been the pollster for Democrats, including former President Bill Clinton and former Vice President Al Gore. He lists Boeing, British Petroleum and Microsoft among his corporate clients.

Meanwhile, in her financial disclosure form, Streicker reported earning between $3 million and $18 million so far this year from rent and other income from her properties.

The Republican challenger’s campaign kept up its accusations against DeLauro on Friday, sayin it is a “fact” that Emanuel lived “rent-free” in a property owned by DeLauro and alleging that Greenberg was awarded contracts from Emanuel while he was living “under DeLauro’s roof.”

“We’re not surprised Rep. DeLauro is whining about the truth being presented to Connecticut voters – Representative DeLauro’s 30-year record of insider deals and self-enrichment is so blatantly abhorrent, she is rightfully embarrassed that her constituents finally know the truth about her,” said Stricker campaign spokesman Conor McGuinness.