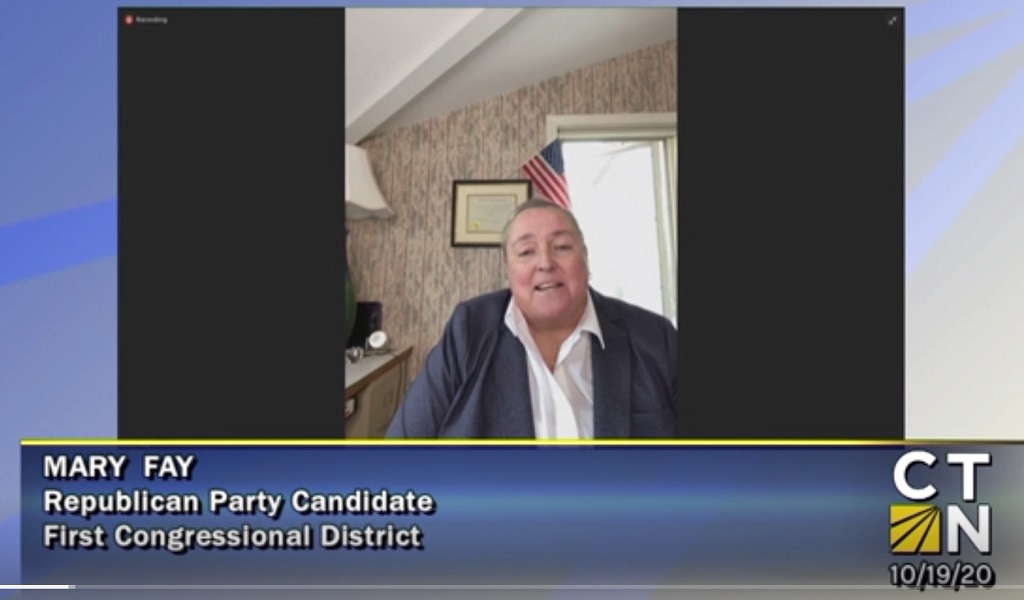 Mary Fay, a candidate for Connecticut’s First Congressional District, appears during a debate on Oct. 19, 2020. The debate, which was held on the Zoom platform, was interrupted by someone who posted offensive messages. The debate, sponsored by the League of Women Voters, was posted by CT-N.

A debate Monday evening among U.S. Rep. John Larson and two candidates seeking to replace him was interrupted by an unknown individual who posted a series of obscene, racist and homophobic messages during the Zoom videoconference where the debate took place.

“They couldn’t find him when they tried to shut him down. It was a farce,” said Mary Fay, Larson’s GOP challenger.

Debate moderator Carole Mulready said the offensive messages, typed into the “chats” portion of the Zoom call, were eventually blocked by a blue bar placed at the bottom of the screen and were seemingly the work of one person.

Mulready said that initially she “didn’t know how horrific” the comments were because she was concentrating on asking the candidates the questions for the debate, which were prepared by the League in advance and also submitted by the public through Zoom chat.

The attack began shortly after Fay, who is gay, responded to her first debate question.

“It is despicable that they attacked Connecticut’s first LGBTQ (female) congressional candidate and the non-partisan moderator,” Larson, D-1st District,  said in a statement released Tuesday. “This type of hatred has no place in Connecticut. I stand with my opponents and the League of Women Voters and condemn this attack.”

The practice known as “Zoombombing” occurs when hackers invade a Zoom video conference and display unwanted, offensive and disruptive material. As the pandemic has made Zoom a favored platform for schools, churches and politicians, these types of attacks have increased.

Last week, Rep. Jahana Hayes, D-5th District, was the victim of Zoombombing when she was repeatedly called racial slurs and interrupted during a virtual town hall event held by her campaign. She shared the screen shots on Twitter of those slurs.

The first Black congresswoman from Connecticut, Hayes reported the attack to local law enforcement and the FBI, which has become involved in trying to curtail Zoombombing.

And another Connecticut lawmaker, Rep. Rosa DeLauro, D-3rd District, has also been the victim of a recent online attack. Last week, a photoshopped, graphic, bloody photo depicting the Wooster Square Christopher Columbus statue holding DeLauro’s decapitated head was posted on Facebook and then shared on Twitter.

DeLauro had once supported keeping the Columbus statute in the square but favored its removal after protests about racial injustice broke out across the nation this summer.

Correction: An earlier version of this story incorrectly identified the congressional district represented by Rosa DeLauro. The congresswoman represents the 3rd district, not the second.

Murphy, other Dems, propose legislation to boost U.S. manufacturing of N95 masks and other equipment as COVID cases spike.

Opinion How essential is ‘Essential?’