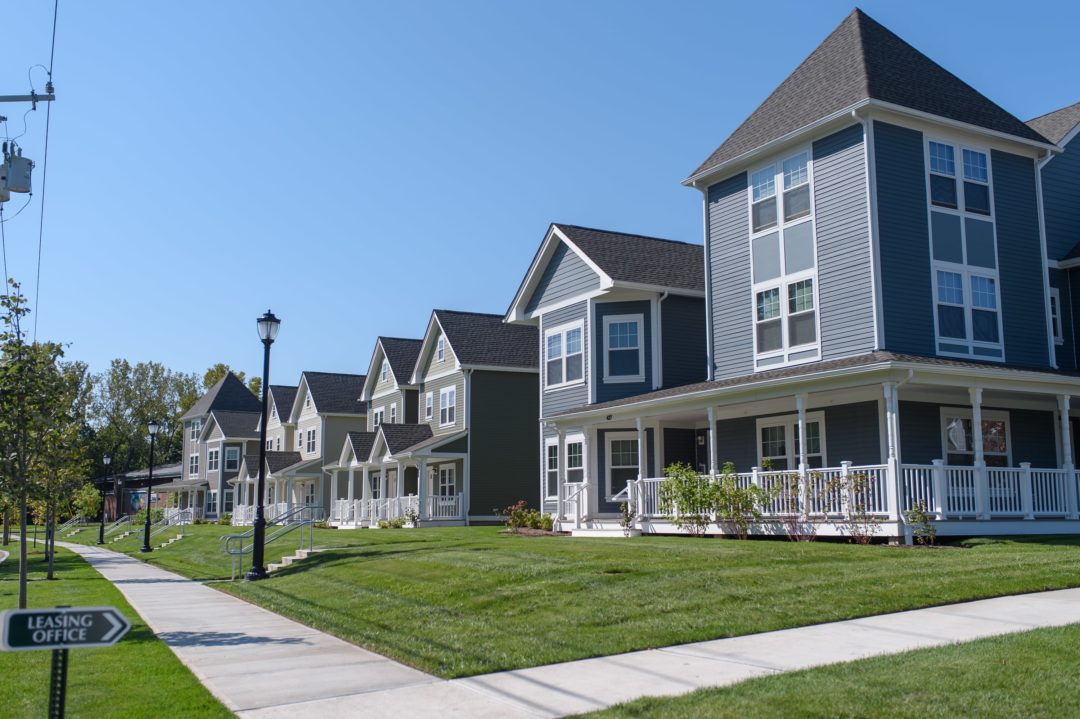 The Willow Creek development in Hartford’s Blue Hills neighborhood in 2019.

A coalition of state and national civil rights groups filed a lawsuit against the U.S. Department of Housing and Urban Development in federal court on Thursday, claiming that a new Trump administration rule will make it much more difficult to challenge unfair housing practices in Connecticut and Rhode Island.

The rule, set to go into effect on Monday, “would immediately render it virtually impossible for most victims of discrimination to prevail in HUD’s administrative enforcement process,” reads the 66-page lawsuit filed by Connecticut’s Open Communities Alliance and SouthCoast Fair Housing of Massachusetts and Rhode Island. Attorneys from the national American Civil Liberties Union and others will represent those bringing the case.

At issue are the local policies that restrict how Section 8 housing vouchers are used. Officially called Housing Choice Vouchers, the subsidies were supposed to help poor people find decent housing outside underserved communities, but a recent investigation by the Connecticut Mirror and ProPublica found recipients in Connecticut struggle to use their vouchers outside segregated neighborhoods because of a lack of available housing within their budget elsewhere or landlords refusing to rent to voucher holders.

Bureaucratic red tape in Connecticut serves as a major barrier to giving these families a choice about where to live since state law gives local housing authorities in each of the state’s 169 municipalities control of the overwhelming majority of the 33,000 federal vouchers used each month in Connecticut.

As a result, four out of every five families who get help paying their rent from a Section 8 voucher live in racially isolated communities and over half in neighborhoods with extreme poverty – the result of the program’s failure to achieve one of its key goals of giving families a chance to live in safer communities with better schools.

In August, a complaint was filed against Gov. Ned Lamont and his housing commissioner, challenging the laws that contribute to the imbalance. But the lawyers now expect that complaint to be dismissed, because the new Trump rule will make it much harder to overturn laws and policies that seem race-neutral but have a “disparate impact” on historically disadvantaged populations. It complicates the process by shifting the burden and raising the bar to prove a policy has a discriminatory affect.

President Donald Trump has explained on Twitter multiple times his reasoning for scaling back this and other fair housing rules, playing on racist fears of terrorized suburbs as he attempts to land the suburban vote.

“I am happy to inform all of the people living their Suburban Lifestyle Dream that you will no longer be bothered or financially hurt by having low income housing built in your neighborhood,” he Tweeted in July. “Your housing prices will go up based on the market, and crime will go down.”

“The notion that, except in very limited circumstances, [Public Housing Authorities] cannot make affordable housing opportunities available to Black and Latino families unless white municipalities consent to their presence is a fundamental affront to the very principles and goals of the Fair Housing Act,” the August complaint reads. The law “maintains and perpetuates segregated housing patterns in Connecticut.”

Nearly 80% of the state’s voucher holders are Black or Hispanic, their average income is $16,200 a year, and the average amount they pay in rent out of pocket is $391 a month.

The federal government lets local housing authorities grade themselves on whether they help low-income people secure housing outside struggling neighborhoods. Authorities report they are doing amazingly well, despite the data and stories showing the challenges poor people face finding a rental where they want to live.

Josh Serrano also lives in one of the state’s poorest neighborhoods. After landing a voucher in 2018, he tried to find a place in the middle-class town of West Hartford, where his son lives part time with his mother. He also looked in nearby Manchester and Simsbury. At each stop, the rent was higher than his voucher’s value, or the landlord wouldn’t take a voucher.

“There is an invisible wall surrounding Hartford for those of us who are poor and particularly have black or brown skin like myself,” he said. “No community wanted me and my son.”

The U.S. Supreme Court ruled in 2015 that there are limits to funneling low-income housing mostly into impoverished neighborhoods because the practice has a “disparate impact” on minorities. That case was based on a community group in Texas suing because the state concentrated low-income housing construction in poor communities – a practice that is especially prevalent in Connecticut.

President Barack Obama set out rules that many advocates believed would allow them to challenge policies that disadvantaged minorities, but the Trump Administration suspended those rules before they took effect and replaced them with rules that many say make it nearly impossible to challenge policies or laws that are anything but blatantly racist.

When proposing the change last year, J. Paul Compton Jr., general counsel for the U.S. Department of Housing and Urban Development, told reporters, “There are a myriad of considerations that go into where housing should be placed. It is not the department’s role to broadly dictate to the thousands of communities across America [and question] local decisions that are made in good faith.”

This lawsuit filed Thursday also challenges a Rhode Island landlord’s practice of renting only one-bedroom units, an effort to target college students and make such housing unavailable to others.

This lawsuit is one of two federal lawsuits that were filed in federal court Thursday to challenge Trumps’ so-called “Disparate Impact” rule. The other was filed in California.

No action in liberal Connecticut, either

Despite its progressive reputation – and Democrats controlling the General Assembly for nearly 23 years and the governor’s residence for 10 – efforts to override laws that allow segregation to thrive here have failed.

Legislation proposed during the last three years that would have expanded the jurisdiction of local housing authorities so that voucher recipients could seamlessly move without the red tape have fallen short. Those proposals also would have allowed housing authorities to build affordable housing in neighboring towns if they win local zoning approval. 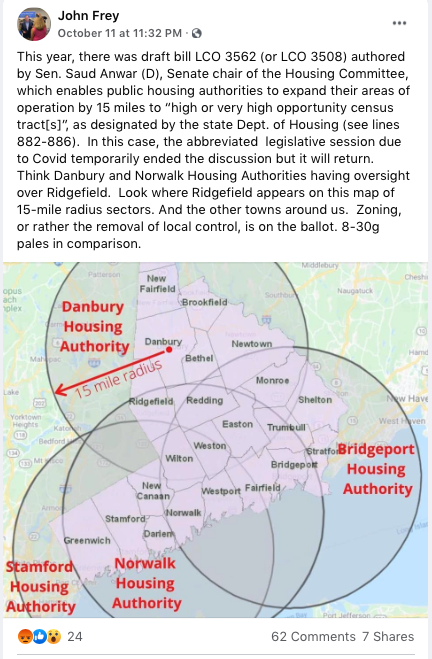 Opposition from members of the suburban-dominated legislature has been fierce, stoking fears that urban cities would take over  housing development in tony towns like Ridgefield or Westport, even though that is not what the proposed legislation would do.

“Think Danbury and Norwalk Housing Authorities having oversight over Ridgefield,” longtime state Rep. John Frey, R-Ridgefield, wrote on Facebook this month of the potential of two nearby majority-Black and Hispanic towns getting involved in his overwhelmingly white community. “Zoning, or rather the removal of local control, is on the ballot.”

The Connecticut Council of Municipalities, the state’s chief lobbyist for city and town officials – which has been hosting events titled “CCM Cares” to underscore their commitment to race equity following the murder of George Floyd – has been the main opponent to broadening the jurisdiction of housing authorities.

“Can housing authorities expand without the consent of the governing body of the municipality or municipalities? If so, this is highly problematic,” the organization testified last year.

The Lamont administration did not provide any testimony on the legislation during his two legislative sessions in office.

Erin Boggs, the executive director of Open Communities Alliance, said when it became apparent that the legislature and governor were loathe to make changes, her organization decided to file the complaint with HUD and now this lawsuit.

“We spent quite a few years researching and advocating on the housing authority jurisdiction issue. And you know, frankly, had become a little frustrated with the lack of progress in the legislature,” she said. “We saw this as another avenue to vindicate the rights of all the many families that we work with who are affected by the housing authority jurisdiction limitation policy.”

The bills are still "a work in progress," legislators said.