Risk and reward: Flying the Trump flag in Connecticut

Marianne Clark cheerily calls herself “a crunchy granola Republican.” She shops for organic fruit and produce at Whole Foods and takes organic cooking classes at a friend’s house in Avon, the upscale Hartford suburb where Clark raised her children, both doctors.

Clark, 64, is passionate about food, about her kids and grandkids, and about politics. On Thursday, she chatted happily about those topics and more standing in a cold rain with state Rep. Leslee Hill and Sen. Kevin Witkos, waving to morning commuters on Route 44.

Witkos and Hill are Republicans in difficult re-election fights, down-ballot candidates on a ticket topped by President Donald Trump, a Republican they carefully keep at arm’s length, neither embracing nor denouncing the president.

“I love him. I love this guy,” said Clark, a Trump delegate to the 2016 Republican National Convention and a member of the Republican State Central Committee. “I really believe he cares about the people.”

Clark is a suburban woman who sees herself on the right side of Trump’s record gender gap, the one that shows the president supported by only 35% of women, while breaking even with men. Clark is a happy warrior for the president in an angry political season. She schleps his signs — the big ones, the ones that cost $60 — around the Farmington Valley.

She is steadfast as the ground is shifting beneath her feet.

In Avon, Canton and Simsbury — the heart of the 11-town district represented by Witkos in the Senate and Clark on the state central committee — the number of registered Republicans has shrunk while the Democratic rolls have grown. 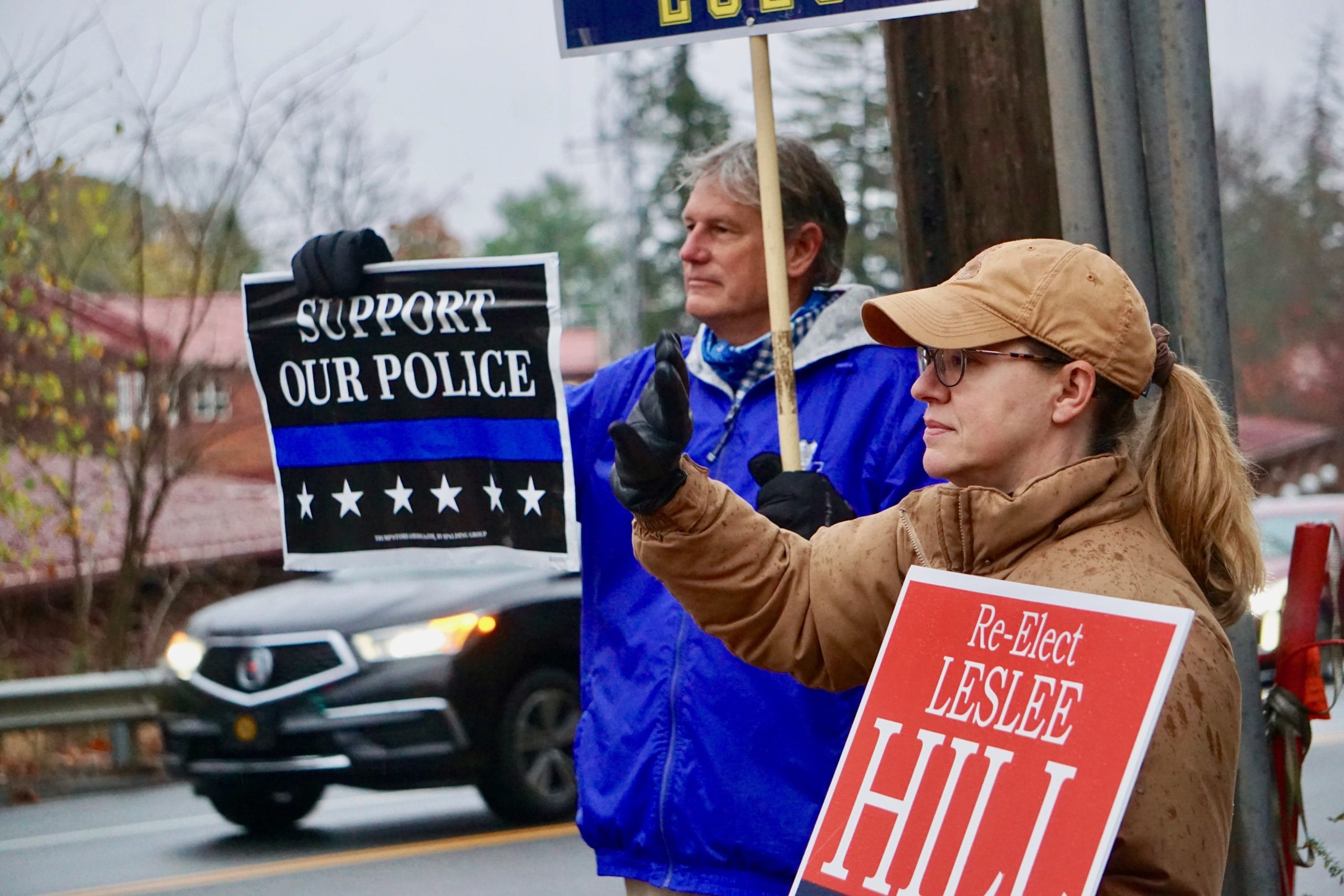 “It’s not just Trump, but Trump is to thank for some of it,” said Melissa Osborne of Simsbury, the Democrat opposing Witkos. She said the Farmington Valley had been trending blue, but women who were unaffiliated, including some who didn’t vote in 2016, are now Democratic activists.

Top-of-ticket Republicans did well in Witkos’ 8th Senate District in 2012, when U.S. Senate candidate Linda McMahon had 52% of the vote and presidential nominee Mitt Romney took 51%. But Trump lost to Hillary Clinton, 48% to 47%.

Witkos is a retired police officer from Canton who was elected to the state House in 2002, unseating a Democrat. He won an open Senate seat in 2008, overcoming a Barack Obama landslide that left Republicans with just 37 of 151 seats in the House and 12 of 36 in the Senate.

Hill was Canton’s first selectman in 2018 when she won an open seat in the 17th House District of Avon and Canton. She succeeded Republican Tim LeGeyt, who had glided to re-election without opposition in 2016.

But the president lost the district by 10 points that year, suggesting an opportunity for Democrats. Hill won with just 50.48 % over Eleni Kavros Degraw, one of several Democrats running for a second time in 2020 after coming close to flipping a GOP seat two years ago.

The Democrat talks about the president. Hill does not.

That answer, of course, does reflect a strategy: Stay clear of the president.

Her predecessor is not so constrained. He has a sign supporting Democratic presidential nominee Joe Biden on his lawn and a declaration on his Facebook page: “I’m a Republican for Joe Biden. It’s been a tortuous and embarrassing four years with Trump in the White House.”

While many Republicans fear Trump will drive down the GOP across the board, Witkos said having Trump on the ballot actually might be a benefit — a relief valve unavailable in the 2018 mid-term election, when voter anger at the president helped Democrats make their first significant gains in the General Assembly since 2008.

“Citizens couldn’t vote against Trump, so they took it out on us,” Witkos said.

Life as a Connecticut Republican activist

On Tuesday, Clark said, her vote will be the only one the president can expect from her organic cooking class. Her comment came with a laugh and a shrug. She campaigns for the president and the local candidates who don’t. That is the life of a Connecticut Republican activist this year.

Other Trump voters are just as strong behind Trump, while puzzled by the anger the president provokes — and the reluctance by many Trump voters to acknowledge their allegiance.

Matt Taylor, 47, a consulting engineer, and Bill Kaliden, 48, a corporate pilot, are part of a crew that stood outside the Simsbury Republican headquarters on Route 10 every Wednesday evening to greet commuters with signs for Trump, Witkos and David X. Sullivan, the GOP nominee for Congress in the 5th District.

“I do it for people too afraid to do it,” Taylor said, waving a red Trump flag from the end of a fishing rod. At work, only when he put a Trump bumper sticker on his car did he find like-minded voters. “They came out of the woodwork.”

Kaliden said his social circle has shrunk. He has two teenage children, and his relationship with the parents of their classmates is strained.

“We lost a number of friends,” Kaliden said. His political differences with a couple supportive of Barack Obama was not an issue until he identified as a Trump supporter in 2016. “All of a sudden, they can’t stand to be around you.”

Kaliden said he understands that Trump’s propensity for personal attacks is a driver.

Simsbury Selectman Mike Paine said he likes Trump’s policies but understands how polarizing the president’s rhetoric can be.

But Paine was an early Trump supporter in 2016, when Trump seemed unlikely to go the distance. And he remains committed. He was one of a dozen Republicans at the final “Wednesday Wave” before the election.

Kaliden held a tall pole with four signs, Trump at the top and Sullivan and Witkos at the bottom. At eye level was a thank-you directed at Tony Bobulinski, a central figure in a story promoted on Fox News, ignored by other outlets suspicious of its veracity and embraced by Trump voters as evidence of an unfair press.

The New York Post ran stories alleging that Biden was complicit in his son’s efforts to do business in China, while the Wall Street Journal and others found reason to be suspicious. NBC has since reported finding evidence linking elements of the story to a foreign disinformation campaign.

Kaliden said the failure of other media to pursue an October surprise was evidence of bias, not care. It’s a talking point among Trump voters. It was conversational fodder last weekend before a small rolling Trump rally on a 26-mile route in Montville, friendly territory for the president.

Jeff Rogers, a retired state trooper and member of the Republican State Central Committee, saw no excuse for ignoring what Trump vaguely insists is scandal, though the Justice Department has been no more credulous than the press.

Ignoring the swelling from a knee replacement 17 days earlier, Rogers led the parade in a pickup truck decorated with a life-size cutout of the president, signs for local legislative candidates and a booming sound system. 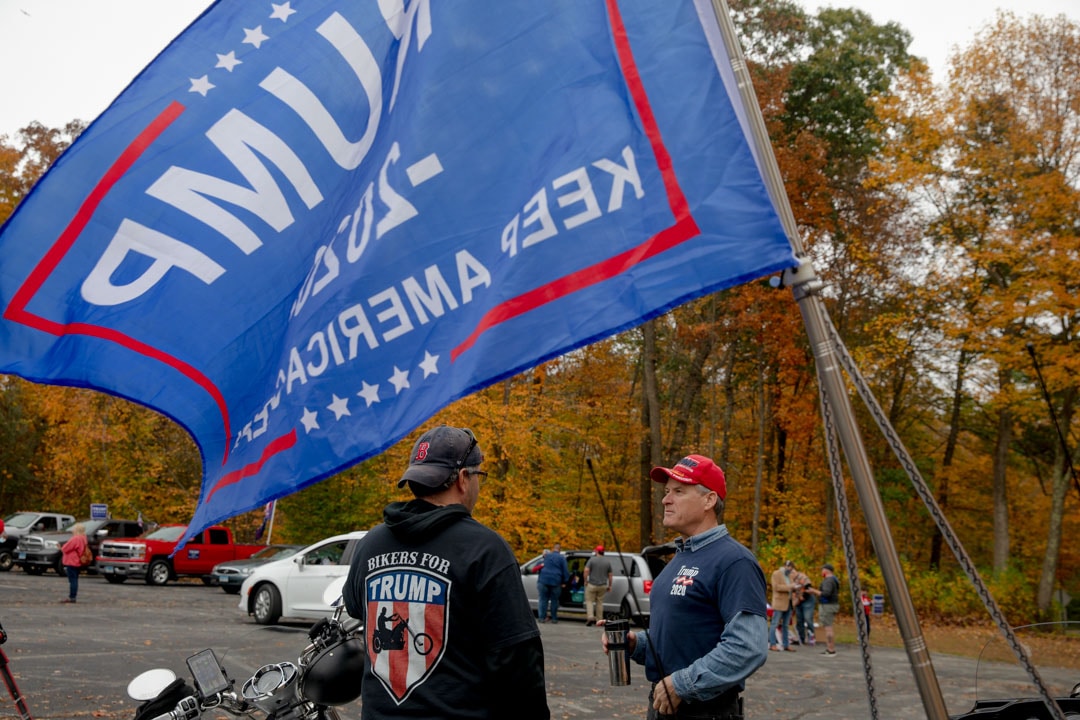 Andrew Lombardi, of Colchester, left, and Frank Maynard, of Glastonbury, talk before the Trump car parade in Montville.

Behind him were Frank Maynard of Glastonbury and Andrew Lombardi of Colchester, each aboard motorcycles outfitted with flagpoles flying Trump flags. Then came 18 other cars and trucks. None carried a candidate for the General Assembly.

Lombardi, a middle-aged father who works in information technology, thought it funny when a buddy photographed his Trump-cycle and sent the picture to the man’s wife, a Democrat. Lombardi said the woman told him, “You should be ashamed.”

He shook his head.

Lombardi said he’ll keep riding with the Trump flag, ignoring the motorists who pull up to flip him off.

“You see nothing for Biden. There’s no excitement,” Maynard said. “I don’t see anything for Sleepy Joe. It’s all for Trump.”

Maynard, the owner of a kitchen-and-bath remodeling company, said he has a $100 bet with a Republican friend, a Never Trumper, that the president will be re-elected. He planned to ride again this weekend, flying the same flag.