Lamont rules out tolls, waits for clarity in White House 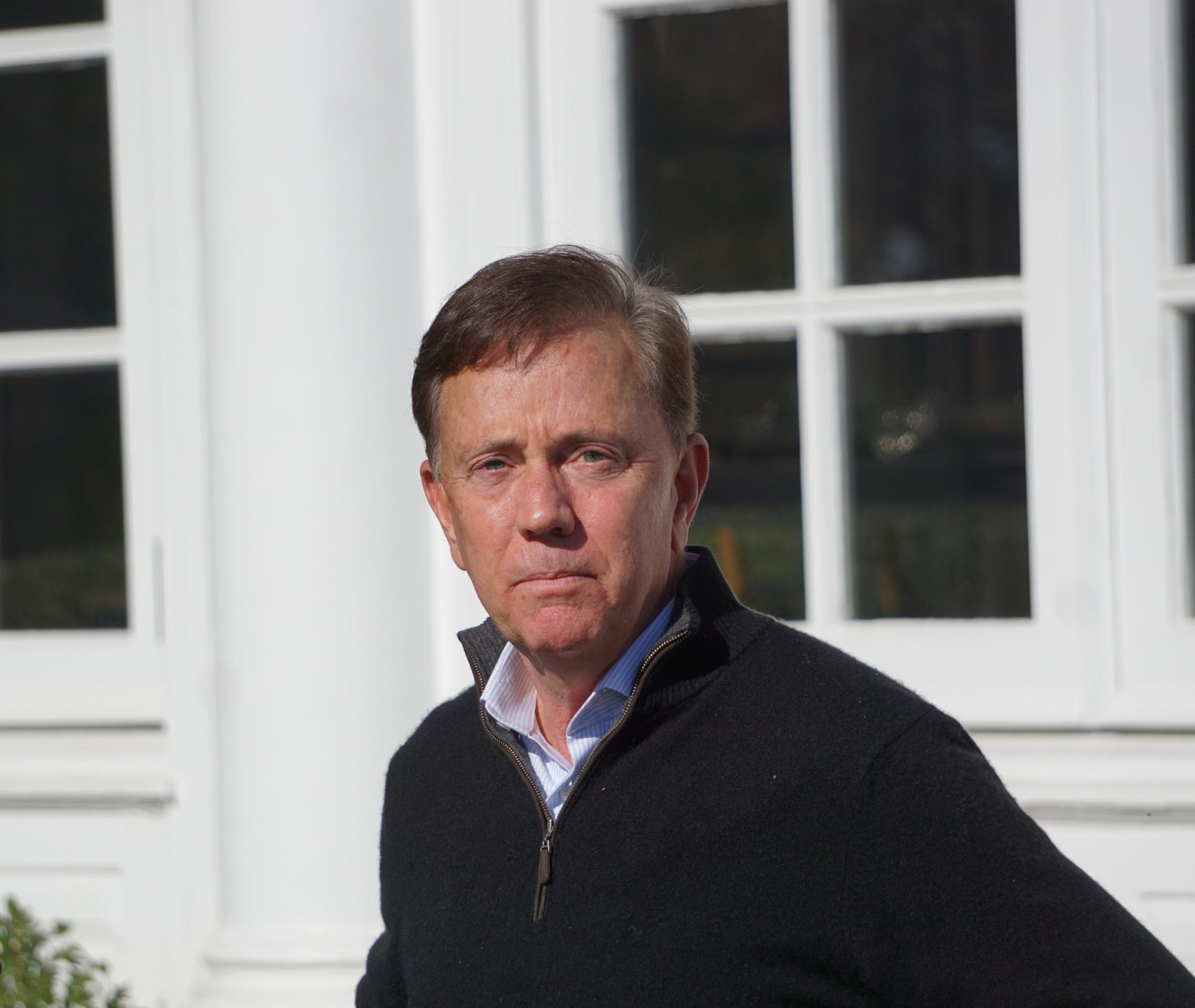 Gov. Ned Lamont talking to reporters Wednesday about the election outside the Executive Residence.

With the presidential race unresolved, Gov. Ned Lamont hedged Wednesday on what agenda he will push in January when the General Assembly convenes with bolstered Democratic majorities of 24-12 in the Senate and 98-53 in the House.

Lamont, an early backer of Joe Biden, said the nation was hungry for clarity about who will occupy the White House in January or the precise makeup of the U.S. Senate and House of Representatives. Lamont celebrated Democratic gains in Connecticut, while confessing disappointment in the uncertain presidential results.

By Wednesday evening, Biden appeared to be narrowing the race, with wins in Michigan and Wisconsin, but the shifting political situation remained uncertain and tense. President Donald Trump’s campaign was seeking recounts and vowing to challenge election results in court, while at least one protest had broken out at a ballot counting center in Detroit.

Against this backdrop of uncertainty, a coalition of grassroots organizations and advocacy groups called Protect the Results is planning more than 100 protests and events around the country, including one in Hartford Wednesday, to stress the need to maintain the integrity of the election.

“Not just because I’m a Joe Biden guy,” Lamont said, addressing reporters in a post-election news conference outside the Executive Residence in Hartford. “But I was really looking for clarity. The last thing I thought this county needed was the confusion that you see with an absolutely deadlocked 50-50 race.”

The Democratic governor gave few indications what a stronger Democratic majority in the General Assembly might mean next year, while offering a firm opinion of what not to expect: He will not seek highway tolls, the issue that instantly robbed him of whatever political capital he took into office as a new governor in January 2019.

“No, I’m looking at other alternatives,” Lamont said. “I’m going to put those on the table. And I’m going to ask the legislature to make a decision.”

More Democrats in the legislature is not a case for revisiting tolls, a transportation funding source viewed so warily by House and Senate Democratic leaders that even a modest version of Lamont’s plan never came to a vote.

“Let’s face it, my solution wasn’t very popular with Republicans or Democrats, nor do they have a solution of their own,” Lamont said.

Neither Senate President Pro Tem Martin M. Looney, D-New Haven, nor House Majority Leader Matt Ritter, D-Hartford, identified tolls or any other new transportation revenue as an immediate need to be addressed in January. Ritter is set to become speaker on the opening day of the 2021 legislative session, succeeding Joe Aresimowicz, D-Berlin, who did not seek another term.

Lamont and Lt. Gov. Susan Bysiewiecz said they remain optimistic that Biden, who has proposed federal stimulus spending for transportation and other needs, eventually will be declared the winner of the presidential race.

With gas prices low and motorists driving fewer miles during the pandemic, Connecticut needs to find additional revenue for the Special Transportation Fund, which heavily relies on fuel taxes to pay debt service on transportation projects.

In April, state analysts downgraded revenue projections for the fund by 10% for each of the next two fiscal years.

But Lamont offered no encouragement to liberal Democrats eager to make the state’s tax structure more progressive by raising taxes on the wealthy, as Biden would push if he makes it to the White House.

An early backer of Biden, Lamont said the federal tax code is the place to raise more money off the rich.

“I thought the idea of Connecticut jumping forward raising taxes on our own puts our state at a terrible competitive disadvantage right when we have the wind to our back,” Lamont said.

Connecticut’s economy is hardly running with a favorable wind, but the state suddenly has become an attractive destination during the COVID-19 pandemic, drawing transplants from New York City and other urban areas.

Looney said he would like to see the legislature instead tackle property tax reform in 2021.

Senate Minority Leader Len Fasano, R-North Haven, who did not seek re-election, saw few lessons in the 2020 results in Connecticut, other than the obvious one: Trump is deeply unpopular in the state and was a drag on down-ballot Republicans, as was the case in 2018 when he was not on the ballot.

“I think 90 percent of this was Trump,” said Fasano, whose caucus lost two seats.

Lamont did not entirely disagree.

“I think it was a pretty strong mandate for the Democrats, building on what you saw in 2018, both in in the state House and in the state Senate,” Lamont said. “I’m not an expert on what that means, but I would presume it had a little bit of something to do with the presidential election.”

Democrat Melissa Osborne of Avon conceded to Sen. Kevin Witkos, R-Canton, giving up on hopes that late-arriving absentee ballots would make a difference. Democrats had been watching the count in the 35th Senate District, but Lisa Thomas lost to Sen. Dan Champagne, R-Vernon, Wednesday night.

Thomas declined to comment, while Democrats said they saw an outside chance of a final count falling within the margin the would require a recount. Unofficial results showed Champagne leading Wednesday by fewer than 500 votes, 28,836 to 28,349.