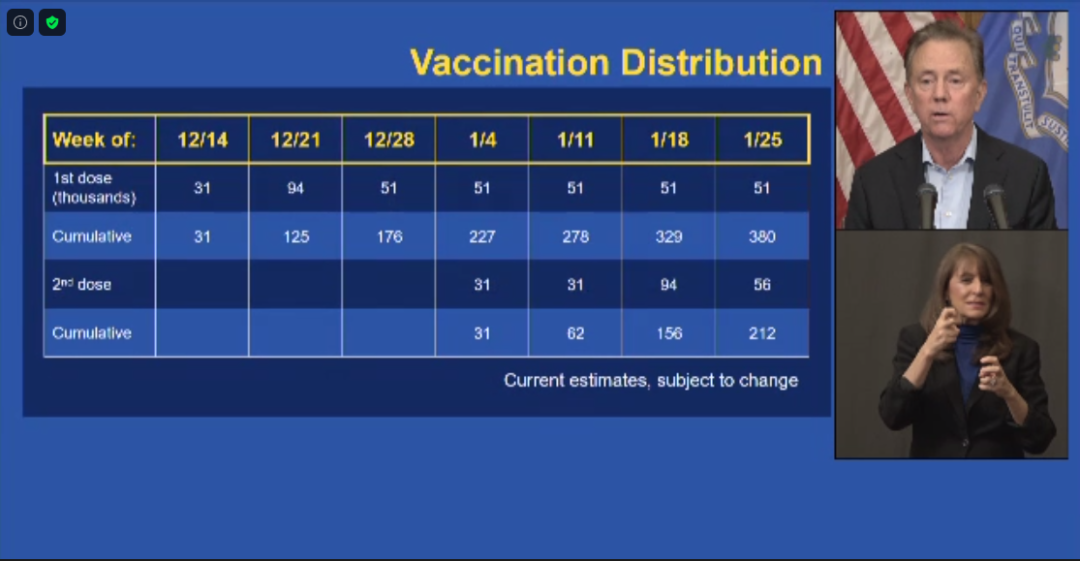 An estimated timeline of vaccine administration in Connecticut.

About 380,000 health care workers, nursing home residents and first responders will have received the first doses of an experimental new coronavirus vaccine by late January, Gov. Ned Lamont estimated on Thursday, offering the first timeline of an immunization rollout in Connecticut that could begin in mid-December.

The drug companies have applied for emergency use of their vaccines from the U.S. Food and Drug Administration and are awaiting approval. FDA advisers will meet on Dec. 10 and Dec. 17 to consider whether to grant authorization.

The initial doses, part of a phase known as 1a, would be distributed to Connecticut’s 204,000 health care workers – including those in hospitals, nursing homes and other clinical settings – its 22,000 nursing home residents and 6,000 first responders. Lamont estimated that about 80% of the people in each group would elect to receive the vaccine. 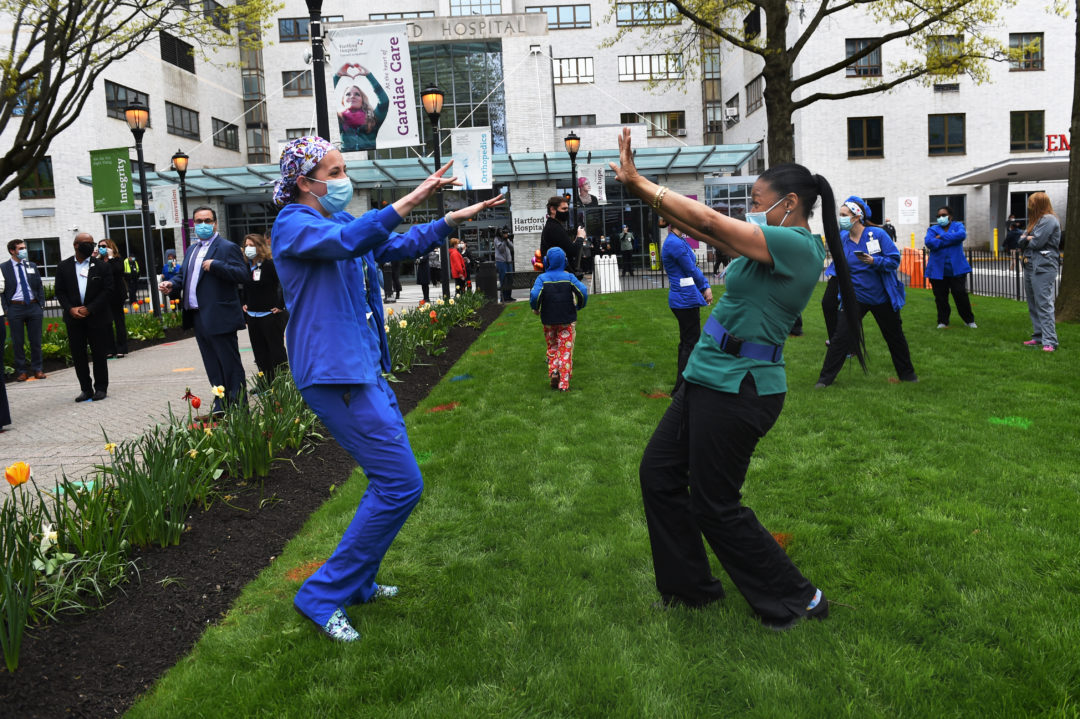 Two Hartford Hospital nurses dance to “I Will Survive” by Gloria Gaynor at the start of a celebration to kick off National Nurses Week.

Beginning in mid-January, people 65 and older, those in congregate settings such as prisons and group homes, high-risk individuals under age 65, and “critical workers” such as teachers, child care employees, correction staff and public transit workers, are expected to be vaccinated as part of a phase known as 1b. That phase will run through late May.

In early June, the remaining populations – children, teens and others under age 65 – can begin receiving the shots.

Lamont warned Thursday that there may be delays in shipments of the vaccines, particularly those from Pfizer, but expressed optimism about the timeline.

“Our work is just beginning, and it starts right now,” he said.

Details of who would get priority when the first shipments arrive or when the state begins phase 1b were not yet clear. There is no mandate requiring any of the populations to get the vaccine.

At least a dozen hospitals across Connecticut have acquired freezers that can reach the “ultracold” temperatures (between -112 to -76 degrees Fahrenheit) needed to store the Pfizer vaccine, and the facilities have made other preparations, officials said. The vaccines will be distributed to nursing home residents through a partnership with CVS, Walgreens and other pharmacies.

The shots will be available to everyone at no cost, even those without health insurance, acting state Public Health Commissioner Deidre Gifford said.

How long it will take for every person who wants a vaccine to get one will depend upon supply and demand, she said, but state leaders are “hopeful” that everyone who wishes to get the shot will have received it by fall 2021.

Lamont on Thursday reported a daily coronavirus infection rate of 7.1% — the first time Connecticut exceeded the 7% mark since May.

The governor also reported another 20 people have died from the virus, bringing the statewide total since the pandemic began in March to 5,111.

State and private labs specifically reported 4,751 of the 66,645 tests completed Tuesday were positive.

“That was not unexpected,” said Lamont, who attributed the surge to “all the travel back-and-forth stirring it up. … It’s a big number.”

Lamont warned two weeks ago that COVID-19 spread, which has been rising since late August, was likely to increase as people traveled for Thanksgiving and ventured out to stores on Black Friday. For much of the summer, Connecticut enjoyed daily infection rates at or even below 1%.

Hospitalizations due to the coronavirus also have been rising steadily since late summer, but the number shrank by 11 Wednesday, bringing the statewide total to 1,191.

Hospitalizations peaked at nearly 2,000 in mid-to-late April but also had been below 100 for nearly the entire three-month stretch from July through September.

The weekly infection rate, taking into account the latest results, is 5.5%.

State worker vaccination mandate to expire, among other executive orders

Gov. Ned Lamont will not seek an extension of his executive order requiring state employees to be vaccinated against COVID-19.

The order goes into effect Saturday. Nursing homes will have COVID tests available on site.

Measuring COVID in sewage has been a reliable indicator of the virus' spread, but Connecticut pulled program funding last year.